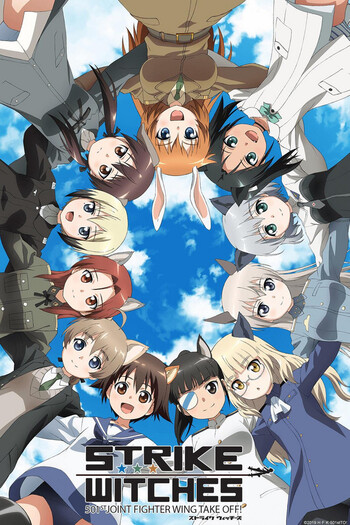 Strike Witches: 501st Joint Fighter Wing Take Off! is, likely to the disappointment of many, not the standard World Witches installment.  For those expecting another trigger-happy "girls with guns" fare, apologies are in order.  Yet, for the brave souls willing to give this show a chance despite the drastic change from the established [Strike Witches] norm, a quirky comedic surprise awaits.

I opted not to assign ratings to 501st JFWTO because, admittedly, the "Story" is non-existent and the "Animation" is OK at best.  Luckily, this show isn't about a great story or eye-candy visuals.  It is a comedy full of wacky shenanigans featuring the 501st in their spare time.  The witches aren't battling the Neuroi or confronting emotional demons or engaging in any existential crises; they're goofing around.  The respective quirks that each witch has displayed in previous Strike Witches installments (like Miyafuji's eagerness to be helpful or Hartmann's laziness, etc.) are slammed into high gear and played upon for laughs.

Honestly, when I first caught wind of a new World Witches installment, I was hoping for something that would serve as a second season for Brave Witches.  However, I was pleasantly surprised by how much I enjoyed the care-free and nonsensical offering that 501st JFWTO turned out to be.  There are plenty of "serious" shows with dark brooding settings.  For those looking for laughs, this is solid choice.