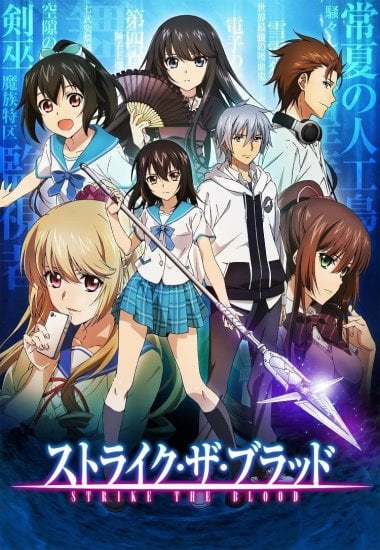 This is the first time I've written a review, so I'll try to make it short and simple.

I didn’t like this show and so this review will point out the faults I had with it.

This story takes place on a man-made island that humans and mythical/magical beasts (werewolves, vampires, mermaids, you name it) live on together. Our male protagonist recently transitioned from a human to vampire, & not just any regular vampire, but an immortal one that can summon other beasts. Apparently he became one of the four most powerful mythical beings in the world and as such our female protagonist was assigned to observe (or eliminate) him.

Initially, I thought the plot looked interesting. You have a regular human being who suddenly became this monster and was being monitored. If he lost control of his powers, his life would end. How will his life change? Will he try to learn more about his new powers to control them better? Or will he try to learn more about the organizations monitoring him? Well unfortunately, the plot had no direction so there.

This show, essentially, is about the male protagonist, despite knowing his situation (that is; new powers but if you lose control, you’re dead), putting himself in situations that could cause him to lose control. But since his sense of justice is so high, it’s quite understandable for him to risk it all to save his family (which he only did once), friends and the girl who is observing him & might eliminate him if loses control. (I guess she counts as friends).

I guess throughout all these risk taking, our lead character learns something about his powers and that is to summon one-quarter of the beasts he has control over, he has to suck the blood of his female companions, thus the name of this show.

So that’s the plot; an episode arcs (3 or 4 episodes) in which the main character and his female companions battle an evil entity who has it for the island or just wants to get strong by destroying the whole island through the process.

The male protagonist doesn’t really develop. His high sense of justice is the same throughout the show. He’s very kind to most female characters in the show that they all end up falling for him; only to give their necks to him. He doesn’t learn anything about his powers besides needing blood to summon his beasts.

The female protagonist really does change, emotionally that is. Right after the second episode, she falls for him to the point where a couple episodes later she offers her neck to him. (And of course he takes the poor middle school girl’s offer with pleasure).

The secondary characters are mostly the male protagonist’s friends and they all have a secret other lives besides being students but the show doesn’t go to deep.

In fact the show doesn’t go deep in any other characters, except for a teacher who is a witch and other stuffs I don’t want to spoil. But mostly, characters are thrown in there just to be thrown out. An example was the previous powerful vampire who gave the protagonist his power. She’s only mentioned in the second episode and that’s it. The show doesn’t even bother to explain why she did what she did (or how she did it). Maybe there will be a second season. (Hope not by the way).

Animation was good. The characters were drawn (or animated) well. The action scenes were depicted well. Sometimes the animation would change depending on the mood of the situation for instance when an ominous energy field appears, it would be depicted with the colors and quality of the animation changing. I’m not well knowledgeable in this field so I wouldn’t go too deep.

No direction & progress. Too episodic.

This is because I just couldn’t understand how this teenager always has to save the whole island all the time. I mean how did the island survived before he became non-human? What are the adults and the organizations (spying) on him doing? It seemed like the evil guys started coming out in drones as soon as he got his powers.

No growth and characters were just thrown in there for the heck of it. Some actually looked interesting but the show didn’t go deep. Even how the main character became non-human was not explored.

Had no effect on my emotions as a viewer.

This show was an abomination. I thought it was going to improve since it was a 20+ episodes but how wrong was I. It had some scenes of fan service, and can be considered as a harem but even that it didn’t do a great job.

Don’t watch this if you expect an incredible action or a plot for that matter.

Overall this anime is fairly good, the problem is that you need to go into it with the right mindset. There's (barely) an overarching plot that ties the entire season together but in reality this series is more along the vein of Amagami in that every 3 or 4 episodes is a new, and separate, story. There's some continuation but for the most part once you watch the first few episodes to grasp the basic story you could jump ahead fairly easily; they even number the episodes within each arc. Lastly, be prepared to have a lot of unsolved mysteries unless there's a second season.

The story itself isn't terrible, it's just terribly disjointed. This show may be best described like a labyrinth, there's many different paths but we don't explore any of them. Otherwise, if you like action and fantasy then you may well enjoy this show. It has all of the primary contemporary fantasy elements as well as a few unique ideas. One real issue I had with this show is that they never really explore any individual story to its finish. There are so many unexplored avenues and paths that we get about half-way down before turning around or just flat out deserted. We never really discover any of the "Whys" of this show. Finally, the ending, if you can call it an ending, seems like they were trying to throw in a piece of finality but it just feels forced; almost as if they knew this series wouldn't get a second season so they tried to give us some feeling of peace.

The animation is usually very good. It definitely leans on the fan-service aspect but doesn't really take it too far. Plus, when they start to focus on the action they tend to leave the perversion aside, which is nice. The fight scenes are generally well done, albeit short. All in all I really had no complaints here except that they tend to use some after-effects like glows and fades too much and it could definitely get annoying.

For the most part I can't necessarily judge sound. The music fit most of the time and the sound effects were usually pretty good. My biggest gripe is that they used some very strange sound effects for certain things: like a spear hitting a magical barrier shouldn't necessarily produce a ringing sound (or when slashing through something). Some of the sounds were overused while others would actually grate. The voices were mostly pleasant and they were able to handle the protagonist's screams pretty well.

Here is where I think they were trying to really focus the story. But as mentioned, they start to flesh out a huge cast of secondary and support characters but then never delve into them. Most anime series will devote at minimum a single episode to flesh out a secondary character, but not this one. They make random and vague comments to these characters' pasts, connections and current goals but that's all. This becomes especially annoying when these characters keep popping up but we have no idea why or who they really are. I found myself saying "huh?" and "why?" a lot. Hell, they couldn't even bother to flesh out the romances!

I don't want to ruin this series too much for those who may enjoy it. But be prepared to be left a little disappointed. The arcs in this show are extremely formulaic (fight, lose, power-up, win) but can be fun. As long as you understand what this show is beforehand you could probably watch it for what it really is: a modern fanservice fantasy show.

This is my favourite anime of all time! I loved the whole thing. It had quite a lot of humour and I reckon that was the key to defining great from good anime. It had very likeable characters and I liked it from the get go and before I knew it I wanted a second season!

This anime was able to make me wanting to watch even more after each episode. The only problem I had in the anime was keeping up and trying to understand with all the names of the groups and organizations the people were in. Along with their purpose for coming to the island. Other than that, if you're one of those go with the flow type of watchers, this anime should be pretty good. So far, this anime is on my favorites. Not the top favorite but if I come across with things that relate to this anime. I'll follow it.

While some parts of the story are admittedly cliche, it isn't so bad that you can't get through them - and I must confess that some of the cheesy motifs ("iie senpai") were pretty cute and amusing.

Story: The story and STB universe is pretty interesting, and the anime changes up the antagonists and the obstacles that make up the main conflict to keep the viewer engaged. Personally, I watched the show for the romantic plot, and I was not terribly disappointed. STB is an example of a harem anime where the male protagonist isn't a stumbling fool and the main female protagonist actually stands out above the others, while the others still have their screen time as well. A second season would be nice, but overall the story was entertaining and touching, with the main downside being some more difficult and boring cliche scenes.

Sound: I'm not very discerning when it comes to soundtracks, but I will say that STB had a good mix of sounds to enhance the fighting and the more emotional scenes as well.

Characters: A nice mix of personalities, and I really liked all the main characters.

Overall: One of my favorite anime, but I can see how it is not a one-anime-please-all type. If you like cheesy romance types with some nice fighting scenes and a world of magic, then this is for you.