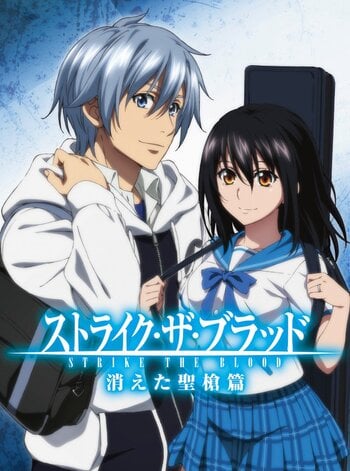 If you're looking for anime similar to Strike the Blood: Kieta Seisou-hen, you might like these titles.

Legends tell of a beautiful cherry tree that bloomed year-round on Hatsunejima Island and even granted wishes. Years later after its magic vanished, Kazami Academy’s Official Newspaper Club, challenged by the Unofficial Newspaper Club to see who can write a better article, decides to report on it to settle their rivalry. But as Kiyotaka and his five close female friends wish upon the arbor to test the rumors, it suddenly bursts into bloom and sends the townspeople a text message from 1951 in the past! The group is now set on uncovering the secrets to the tree’s revival and becoming more than friends with Kiyotaka, who keeps bumping into a young girl called Sakura with a possible connection to these mysterious events...

Taketo and the gang find themselves stranded on an island. Little do they know this proves to be a treasure-trove of material for Taketo's unique pornographic literary skills.