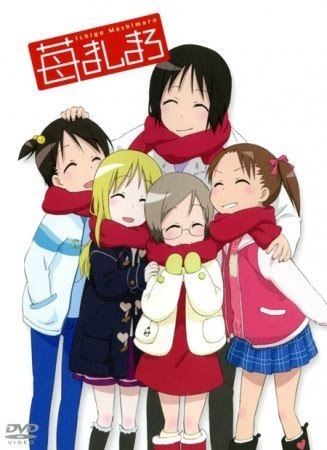 Meet Yotsuba Koiwai, the strangest little girl around. With a mind so straight it's twisted, Yotsuba takes everything in life at face value and sees everything with the eyes of impenetrable innocence. With her laid-back father, Yotsuba moves into a new house and makes new friends - friends whose minds boggle at the wacky and somewhat wise way that Yotsuba lives her daily life!

Himeji Wakaba is a 5th-year elementary school student, and she has the ability to see things that others can't. They are mostly frightening evil spirits, and they tend to do bad things to people who are close to her. As a result, Wakaba has no friends and rarely smiles. On a couple of occasions, she brings home stray animals, but her parents won't let her keep them. However, they're worried about their sad, creepy daughter, so one day they decide that whatever Wakaba brings home next, they'll let her keep.The next thing she brings home is a pink monster called "Pupipo," but her parents stand by their decision and let her keep it. No one is quite sure what Pupipo is, but it protects Wakaba from the other things she sees. Pupipo also helps Wakaba make friends with an occult-obsessed transfer student and solve problems with bullying. Wakaba's life is a much better place with her pet pink monster!

Me and My Gangster Neighbour

Follows Yuuhi, an elementary school student who is home-sitting alone every day. One day, all of a sudden, his neighbor, Mr. Aoi, who lives upstairs, falls in his room leaving a hole in the ceiling. Yuuhi finds out that his neighbor is a cool looking man with a secret side he doesn’t want anyone to know. What does he want to hide so badly?

Neko no You na Nanika

At first glance, Nanika is a mysterious creature that looks like a black cat. Eat melon bread from the wrong place, and even if you want to put on a collar, why does it slip and stick to the ceiling like Spider-Man? Nanika should be uncomfortable, but master's elementary school student: Renya-kun accepts this with the attitude "I did't know that cats are such creatures."

Tomodachi no Onee-san to Inkya ga Koi wo Suru to Dou Naru no ka? (Light Novel)

A self-proclaimed unattractive gloomy high schooler, Hiramiya Reiji, everytime he goes to visit his close friend’s house, he gets messed around by his older sister, Sakuya. Drinking his drink as she pleases, barging into the bathroom, and crawling under his blanket in the middle of the night… Thinking that perhaps he has done something to make her dislike him, he asked his close friend whether he has any idea, but he only gets a reply in a incomprehensible way, “you still haven’t noticed it, huh” On a certain day, Reiji loses in a game and has to listen to 3 of Sakuya’s wishes. Reiji goes along with it even though he has doubts, but could he gradually begin to understand Sakuya’s true feelings…? This is the story of super dense youth and a can’t-be-honest older sister until they become a lovey-dovey married couple――

Higuchi Kotarou was just a normal sixth-grader until a new next-door neighbor enters his life–an insanely perky angel named Misha that has made it her life’s work to make Kotarou happy! And if that wasn’t enough, Misha has an even stranger roommate–a kind-hearted demon named Shia and her mysterious black cat Nya! If Kotarou’s life at home is this weird, what can it possibly be like at school?