Alt title: I My Me! Strawberry Eggs 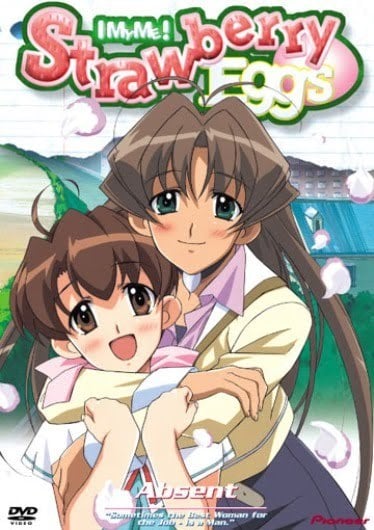 Story: I watched this because I was looking for a funny romantic comedy, and it must have been a long time ago when I watched this- I was very new to the anime scene. But even then I could tell after a mere 3 or 4 episodes that this anime showed little to no promise.

The story tells of a man who cannot teach at a school because its an all girls school. So what does he do? Why, he dresses up as a woman of course! Yes the premise was mildly amusing at first, but episode upon episode was exactly the same, dull, dry humour what fell flat and left me devoid of anything good to say about it.

Animation: Animation is about average in this anime, its not good, its not bad.

Sound: Sound was just average too. The OP was ok.

Characters: Characters in this show, all 800-odd of them were the same volumptuous highschool girls with no personality whatsoever. The only one I mildly remember was a shy, reserved girl who ended up acting like she had a crush on the main guy (still dressed as a girl at this point)

The main guy was just a pervert, his new-found femininity let him gawk at all the high school girls which was NOT nice to watch >.> I admired his stubbornness at wanting to teach at the school despite the rules, but once he got there he turned to a typical male protagonist- just there to see some flesh.

Overall: Even when I was going through my ecchi-obsession stage I STILL didn't like this. There are much better romance and ecchi anime's out there- just leave this one. Its not worth watching.

Art: Art is fine, it does what it needs to do and that is to show a visual story. I initially though the sries was from the late 80's to early 90's. Imagine my surprise when it is listed as airing in 2001. Looking at the art I never would have guessed.

Sound: No real complaints actually, it's pretty ok. Voice actors are good and I don't remember any music either. This is how I generally prefer my anime.

Characters: The main character is Hibiki. He has a dream of becoming a PE teacher and is very passionate about his profession.

Fuko is a young girl in Hibiki's class and a notorious cluts who has trouble running 10 yards without falling flat on her face. Under Hibiki's guidence she slowly becomes better.

Story. Hibiki has a dream of becoming a teacher and applies at Seito Sannomiya Private School. Little does he know that the principal there hates men and refuses to hire him. At this point he gets help from the owner of the boarding house who gets him the job he wants. The catch is that he has to dress and act as a woman to do it.

Rant. The story starts out fine with the introduction of Hibiki and his problems at getting the job he wants. The antics he goes through cross dressing are legion and many of the tropes that you are expecting go by but it is actually quite good and fun.

The problem starts when Fuko develops a crush on female teacher Hibiki who is in reality very much male. Still it is pretty much ok as there is no reall issue with a student having a crush on the teacher. One of the male students also has a crush on female Hibiki and it is played for laughs as Hibiki wants nothing to do with any of it.

Then it takes a nose dive when Hibiki starts to answer Fukos' feelings and it dives hard. To the point where I wondered if I was willing or able to watch the last few episodes. What Hibiki is contemplating is very simply rape. The fact that Fuko is willing does not matter in the slightest.

Fuko is 14 years old and as such is a minor which is automatically a rape charge for Hibiki. At this point she believes that Hibiki is female which adds a whole new layer to this shitcake. Hibiki is her TEACHER and as such should be banned for life for abusing his position and he knows this.

While the entire affair never goes beyond the 'almost kissing' stage it is pretty clear that this is only because of the fact that each time they are disturbed before it gets to actual contact.

First I would like to say that this anime is pretty silly. It really surprised me actually, because a glance at it mislead me to think it would be fairly average and possibly not worth it. Then I found myself laughing out loud and enjoying every minute and character, even the two pervy dudes who are always up for some school girl peepin.

I watched it for the tags, so if you don't care for them, then leave it be. But seriously, how archaic is it to shun male crossdressing or be sexist at all? I personally find it hilarious and was interested in this show because of it. It has nothing to do with perversion and though it is usually a form of self expression, it was not in this case anything more than a means to an end and awkward antics. I almost never find male characters cute, but this one was.  :)

There was only a touch of romance in this show, which was fine for me as there are tons of those already. But I found it very funny and it caught me off guard as it stayed pretty balanced all the way through with a satisfying finish. And as I tend to stay away from older anime in favor of newer shinier ones, this really surprised me with its high quality story and characters. Sure it could have gone deeper, and been longer, but you often get better quality from less content and while I was left wanting a sequel I remain content with the thought of watching it again someday.

In conclusion, I found it to be a very refreshing anime and watched it in one sitting happily. I was compelled even to write my first review ever on this site only to express how much I enjoyed it in an effort to attract more people to it.

From watching this anime, I have discovered a story of sexism, and hiden gender that will capture you're interests. This story revolves around a male teacher wanting to teach at an all girls school. is application is denied because he is male, but the owner of the Inn he he stayng at helps him with this problem by disguising him as a women. What unfolds is a hilarious turn of events as the male teacher tries his best to conciel the fact that he is disguised as a women, teaching the all female students of the school, and proove his point that either male or female, a teacher is a teacher.

I reccomend this anime if you're interested in comedy. It may be a little dated, but it is a good story.

I My Me ! Strawberry Eggs is one of those underrated anime that people usually avoid to watch. A shame because this little series highly surprised me.

The story is rather simple. Amawa Hibiki disguises into a woman to provide lessons at the nearby all-girls professorate school. In this genre of premises, you usually expect some sort of ecchi crap with a pervert main character. Surprisingly, in this series, the main character is NOT a hentai otoko. The most interesting thing in the series is the developping relationship between Hibiki and his students. He soon begins to truly care for them and their well-being. The relationships between the students themselves is fascinating. They do not feel at all cliched and their developpement is natural. They behave as 14 years-old kids and that is fantastic considering they actually are young teenagers. I particularly adored the teacher, Hibiki. He is mature and enjoy his job. He does not take advantage of it and really care for his students. He is a tremendously good teacher.

The animation is old. It is a 2001 show after all. But even that, the animation is horribly flawed. Other 2000's shows just look way better than this. Sometimes it is just so unbearable to watch. I truly wish it could have been better, because the show deserves it. The character's design was simple but effective ( can I say the kids's uniforms is just ugly?).

The sound was relatively ok given the randomism of the show.

The characters are the reason to watch the show. Precisely Hibiki and his students. They just are fantastic. At first they may seem uninspired, but they are not. It is developped slowly with uttermost care. I appreciated that. THIS is how a teacher-students anime should be made! Without the fluffy ecchi crap.

Overall: I My Me! Strawberry Eggs is, despite it's weak debuts, a undeniably charming little series. It is cute and heartwarming. I liked it a lot to say the truth.

Score: 3.5 / 10. The story and construction is clearly above average anime. But the animation and side-characters stopped it's score.

This review is way shorterv than usual but I can't express the charms of the series. You just have to be open-minded, take a deep breath and plunge in it's warminess. I did not regret it at all.

Next! My actual review of Pandora Hearts