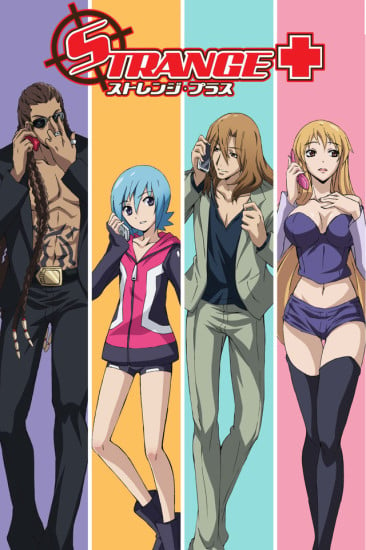 A phantom thief named Rusty Nail sends a letter to a mansion, saying they're going to steal their treasure. The Mikuni Detective Agency is called to protect the treasure, but are they up to this challenge?

In a world where humans and human-animal chimeras live together, half-human criminals leave non-human clues that have the police stumped. Enter the "lone wolf" detective Hiroshi Inaba, who has the ability to extract information just by examining (or tasting) someone’s hair! While his methods are unorthodox, he's up against a half goat crime...

Both are gag comedy series that follow a group of private detectives as they cause mayhem, confuse everyone they run into, spend their days joking around.....basically anything apart from actually solving mysteries in a professional manner.

Two shows with a bunch of strange characters getting into even stranger antics. The main leads are detectives, but they don't really do as much detecting as they do goofing off or causing mischief. Strange+'s humor is a bit more crude, but if you're wanting some more ridiculous comedy than I think you're looking in the right direction here.

Both of these series are about a crew of ragtag detectives who are hired to do a variety of odd jobs. What these series also hold in common is their flood of over the top gag comedy! Inaba has longer episodes, and occasionaly takes itself more seriously, but if you're looking for a laugh and enjoyed one of these shows, check out the other!