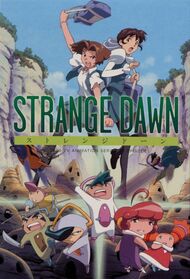 Emi and Yuko are two middle school girls who, with a flash of light, have suddenly found themselves in a place much farther than home, where all the people are only about a foot tall. Without further ado, they are named the Great Protectors, who were destined to appear. With war in the air and tensions on the rise, all the girls want to do is go home. But will they find a way back, even though they don't know how they arrived?

Story 'Person in a Strange Land' series are pretty stupid. Having said that, Strange Dawn is one of the least cliché of these that I've come across. In most stories of this genre, our intrepid protagonist gets whisked away to a fantastical land. Upon arriving, they are given magical powers, and discover that the first person they chanced upon was the benevolent, handsome (and single!) prince who has fallen desperately in love with them. What luck! Or maybe they have awakened with some wonderful heretofore-unknown combat prowess, and, after being awarded an impossibly large sword, embark on a journey with their newly assembled posse of best friends to slay dragons. How heroic! Strange Dawn has none of this. Eri and Yuko find themselves, unchanged, in an alien world, but since all the inhabitants are so diminutive, even the girls' ordinary heights and strengths are huge assets. Despite this, they rarely participate in the battles raging around them, usually choosing instead to watch passively or go about their day-to-day lives as normally as possible, given the circumstances. Perhaps that's a little boring. Fantasy is generally a means of escape from mundanity, so watching two teenage girls gather firewood, deal with culture shock, and discuss their periods when you're expecting Epic Dragon Battles of Doom could be disappointing. Strange Dawn does eventually get more exciting- despite it's childish art style, the latter half doesn't shy away from political scheming, blood, on-screen deaths, and scenes of pseudo-sexual perversion. However, Strange Dawn prioritizes buildup over entertainment so before you can feast on the political and martial meat of the story, you must first be force-fed episode after episode of very slow world building. Now, I love a fully realized setting as much as the next guy, but amidst all the oodles of cooking and cleaning scenes and musings over the difficulties of being stranded in a different world with only one set of clothes and no bathrooms your size, the series also saw fit to call attention to the most unrealistic elements of its setting. Yes, it's nice that they realize how lucky it is that the composition of this world's atmosphere is comparable to Earth's, and how wonderful that all the inhabitants understand Japanese, but when the tone isn't humorous enough to pass these things off as a joke, calling them out is disastrous for the audience's suspension of disbelief. Once the plot finally gets around to moving along, half the episodes have come and gone, and there simply isn't enough time to comfortably fit the bulk of the narrative, making it feel rushed. This is a shame, as the story has a solid foundation- a small-scale epic (pretend for a moment that makes sense) about a village whose province is, due to a schism, torn between loyalties to two different countries. The role of the Earthlings in the story has potential as well- they are viewed as beneficial political tools. Strange Dawn also does a stand-up job at subverting most of the genre's tropes: though the main characters don't have superpowers, they can still impose their will by screaming, flailing their limbs, or acting like hulking giants. And even when a cliché starts to sneak in (Oh, these two random girls are clearly the Great Protectors all these legends talk about), it is quickly rectified (lol, jk that story is pretty dumb). AnimationStrange Dawn's animation lacks the charm of older series and the technical merits of current offerings, landing it smack in the middle of 'Decent'. Settings are pleasant and movements are smooth enough, but the character designs deserve special mention. Instead of animating the tiny humans that Eri and Yuko encounter realistically, they are given stylized, simplistic designs that resemble "chibi" characters. Unfortunately modern anime viewers associate chibi style people with cheap gags and simplistic emotions, which makes taking the vast majority of the cast seriously extremely difficult.SoundThe OP is an excellent sweeping tune, but seems like a set up for a much more adventuresome yarn than what is delivered. Background music consists typically of unobtrusive instrumental tracks, and while the vocal work is apt, it's not particularly memorable.CharactersThe cast was pleasantly free from major anime archetypes. None of the characters could be written off as "the dumb one" or "the tsundere". Eri is polite, and Yuko is brasher and finds everything about their new situation distasteful, but no one is overshadowed by their traits. However, in making the cast unique and realistic, Strange Dawn forgot to make them interesting as well. Watching Eri and Yuko deal with culture shock and have conversations about their hobbies and aspirations could have been interesting, had the show bothered to give me a reason to care about them.OverallI appreciate Strange Dawn. I think it tries to do interesting things with a genre that I find vapid. However, I don't particularly like it. Slow scenes were too slow and fast scenes were too fast and even the resulting whiplash couldn't distract from the fact that it didn't allot enough time to important developments. For those looking to test the genre out, this may be a good option- it's manageably short, and appropriate for most audiences without skimping on depth. However, most people will find that the series is too nuanced to be exciting, yet doesn't explore its heavier themes with enough time or intensity to be intellectually stimulating.

After dragging myself through the 13 episodes, I realised that the only good thing about watching this anime is that it makes you appreciate the other anime out there which have actual storylines and developed characters.  Note: The main characters (Eri and Yuko) don't play a major role in anything. Characters For the last few episodes, the chibis take all of the spotlight, and it makes me wonder why in the world were the girls even transported to this world anyway. The main purpose of Eri and Yuko in this story seems to be to give us the cringe-worthy experience of watching two pampered girls living in an uncivilised land - like no flushing toilets, GASP No. Way. - and what you could do with your spare time besides complaining about how everyone around you are idiots or worrying about your laundry. Eri primarily spends her time writing her fantasy story, chatting to the small people and believing what everyone tells her. Better yet, Yuko complains constantly, is as rude as she can be to everyone around her, and is the epitome of a 'selfish brat'. Yeah, when small people are dying and crying around you and your only worry is that you haven't handed in your assignment to Harada-sensei, or that you only have one pair of undies...You really need to get out there and develop some kind of conscience. I am sad to say that Eri is a total whimp and quite stupid. She wants to help (bless her kind heart), but the only plan of action she was able to think of doing, in the entire anime, was to: (1) Threaten the enemy chibis that she is going to eat them, (2) Shout like a child having a tantrum, and/or (3) Cry emotional tears.  Too bad she isn't big enough so that her tears can create a mini flood 'cause that would be more interesting.  The stupid thing is that when her unimaginative attempts to help fails, she would just meekly follow whatever the enemy chibis say - even if it means her chibi friends are all gonna die... Reaaalll smart. -.- Yeah, don't expect any real action from either girls. Eri is already the better of the two, though. The selfish brat on the other hand...Till the very end - after villages were burnt down and people are crying because of their hearts being broken, family members dying and all, her last lines were "I WANT MORE THAN ONE PAIR OF UNDIES~!"(I'm not kidding you) and then she gets transported back to her own world in a flash of pink light. Nope, don't say goodbye to your chibi friends who were on the brink of death because you did Nothing for the last 13 episodes. Naah, just go back home and forget these poor little chibikos who had the unfortunate chance of meeting you in their life -.-;  Story I can talk about the actual political story in the chibi world, but honestly I watched this because I thought the two girls would do something substantial. But no, they don't, because apparently they just don't want to (or lack the intelligence to think of anything)...so why did I watch this again? Though I think that I can make a compelling argument about the lack of storyline by just pointing out how randomly they return home. If I simplify the ending, the girls basically got too frustrated with the chibi world and started complain-crying and pushing things around in their environment, then walaa~ they disappear in a flash of light. The End. Did it actually resolve anything? Beats me. Sound I got to say that when I first heard the soundtrack in the first episode, I thought it sounded very mellow and calming. But when they started looping it in the background in the following episodes for nearly every single scene be it a scene with tension or happiness or not, it frustrated me. It made the already-melodramatic scenes extra difficult to watch.  Overall Make your own judgment of whether you'd like to waste your time with this. Interesting synopsis, a few good reviews out there, but I don't see what good I took from the few hours I spent watching this.