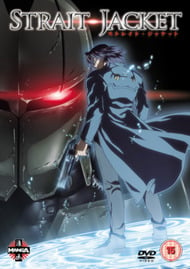 In a world of science, sorcery is rediscovered and rapidly adopted in all areas of industry – but at a high price: an invisible pollution is spreading out across the world. Those who do not take proper precautions become infected, lose their sanity, and become demons. The Sorcery Administration Bureau, along with their Tactical Sorcerers, monitor magic uses and respond to any demonic outbreaks that occur. In this world, Ray Otto is a rogue tactical sorcerer who hunts down demons with reckless abandon. Given that he always gets the job done, the administration generally lets his activities slide. Together with the mysterious girl Kapel Theta, Ray risks his life and humanity to destroy demonkind... when the price is right.

StoryIt's very rare for a series centred around magic to be any good - in recent years, we've had a magic school with particular boring storylines in the form of Happiness!; the abysmal Saint October; the yawnworthy Gift Eternal Rainbow that pretended to be a drama; and the just plain nonsensical Majokko Tsukune-chan. Unfortunately, Strait Jacket can be added to this list, and the reason I say unfortunately, is because this set of OVAs does actually start out with a lot of potential.  The initial premise is that magic exists as a science in the Strait Jacket universe and it seems to be used for medical and military purposes, but also, in industrial environments too. This I can cope with, as it explores magic as a specific entity, following regular scientific rules (which aren't explained but don't really need to be). I can even cope with the heavily armoured soldiers known as Tactical Sorcerists who seem to have spawned from Pumpkin Scissors. Again, the magic weaponry follows a set pattern and doesn't stray into the usual RPG ground of bringing in magical swords and whatnot. However, after that, everything starts getting a little more tired. The magically deformed creatures that have to be fought every episode are no more than an annoyance, with too much time spent on their rampages (which is fine the first time, but when every episode is the same, it gets repetitive). Their metamorphoses are very reminiscent of scenes from Akira and one particular event in Claymore, except those two series are far superior. And I think that's the crux of what dissatisfies me about Strait Jacket: it is nowhere near as good as the series it draws inspiration from. All the events in the miniseries are replications of better scenes found in other anime series.  Even the political intrigue that arises towards the end is squandered, with an over-the-top vigilante quashing a terrorist organisation with one frenzied killing spree. When you consider how well similar circumstances were portrayed in Pumpkin Scissors, this just seems a complete waste of potential.AnimationThere are a few stand-out moments in the animation quality - usually during the fight sequences, when the Sorcerists let off huge waves of magic - but I don't consider these frequent enough, nor stylish enough to save the animation score. The character designs are bland, with only Kapel Theta standing out as being vaguely original, and the art quality is inconsistent to say the least. Monster design is also a negative point, as the designs are usually either too bizarrely complex or just replicas of the monster in Akira. While I'd expect a longer series to experience these type of difficulties, I find it inexcusable that a miniseries as short as this can't overcome these issues.SoundMediocre at best, but I quite enjoyed the opening theme. While all action themes seem to be going for edgy, metal guitar-powered songs these days, it's not a trend I'm adverse to. Having said that, the in-episode music was less than inspiring and the voice actors barely provoked any reaction in me - in fact, Rachel's repeated "Onii-chan" in her super whiny voice made me want to stab her, which I don't think is the reaction the creators were going for, somehow...CharactersCue stereotypes! Okay, that's a little harsh. Rayott, while being your usual moody monosyllabic antihero, is actually a fairly interesting character. We're always reminded that he has a "past" and that in this past, dreadful things happened. So, add that to nearly every anime character ever created, right? However, at the same time, his relationship with Kapel Theta is an interesting one, and I think if the overall series had been better realised, then this would have become the crux of the series. As it is, I had some vague interest in Kapel Theta's feelings for Rayott and whether these would develop in an interesting and meaningful way, but I think the length of the series was too limiting for such development. The other characters may as well not be in the series. We're introduced to several minor characters, the most interesting being Isaac who becomes the focal point of the third episode, but even he is crushed by the weight of the drudging plot and his later reactions don't feel realistic when you take his rank within the military into consideration.OverallAnother OVA that wastes its potential and yet another series focussing on magic that seems too interested in using magic as a weapon rather than as a useful social inclusion to a fantasy series. This score would have been several notches higher if it explored all the threads and questions it opens, but sadly it follows the same formula as all series of its kind, and heads straight to a predictable ending made even more stagnant by the fact that we haven't had enough time to truly care about the characters fighting. Don't get me wrong, there are some nice philosophies on life and death, and in particular, the idea of a death wish (explored better, again, in Code Geass and other series). The action is also somewhat spectacular in parts, but if you're looking for a coherent plotline and a fulfilling ending, then this set of OVAs isn't for you.

This is a great example of a series which has potential, as far as the world is concerned, and what it characters have to do to keep order... yet it feels like when I watch it, the show is insulting my intelligence.  When thinking of the world this story is created in. I can see potential. Humans gaining the ability to use magic with a price. Excessive use of magic without protection can cause you to mutate into a devil bent on killing everyone. Then, Making a group that polices the use of magic so that when things get out of hand they can take the devil/s down. I guess it makes for a decent premise. Sure there is nothing too original about it, but the idea has promice. If done correctly, it could have some great elements to it. Unfortunately the idea behind the story and the world it is set in, is virtually the only real positive thing I can say about this series other than a few of the characters being worthwhile. The story ends up being very generic. They make many parts overly cliche and stupid yet it is obvious they are not trying to be comedic in those scenes. They are actually serious which is kinda sad.  The animation was decent. The devils were crazy weird looking things. They didn't look nor move like humans, so I have no standards on which to gauge how well they were animated. Also, in regards to the magic warriors who took care of the devils, during combat they were wearing bulky suits that don't really allow much freedom of movement and used heavy guns so having tons of animation talent was not really nessesary. Overall, I had no complaints but nothing really stuck out as great eather, in my eyes. I am no expert though. I did not like the sound very much at all, but that could be more personal preference than anything. Sound affects sounded weird especially with the devils. Though this is semi-expected given the type of creatures they look like. However, that doesn't change the fact that I didn't like it. Also, the people who fought the devils especially the male main character had to scream Exist as he fired his super heavy powerful gun all over the place... it was just annoying. However, as far as sound quality or range of affects. I thought it was okay. The characters. With the exception of the male main character were unmemorable for the most part. The male main character is what took the characters rating up to a 6 from a 5. Otherwise, everything about the other characters, their motivations, and personality ranged from "ugh" to "blah" (stupid and annoying to whatever and so-so) The main character woman being the most annoying. I know I have a tendency to harp on women, but try this show out you will see that she deserves to be harped on. She is a complete idiot. A stupid character that is a glorified babysitter for devil hunters. Worse yet she shows no real need to be in the show at all except as a copy paste potential love interest. Ditsy and stupid, yet somehow motivates the male main character with her jibberish.  If you are looking for a anime that is just action for the sake of action and you don't really want to think and can ignore stupidity as well as other annoying parts. This show is decent to pass time.

Was this supposed to be longer? There seems to be a lot of back story, but it barely touched on it. We get a glimpse of it, but that isn't enough. This OVA was only three episodes long, and it should of had added another episode, so we could at least get to know the characters, and sympathize with them. Instead, I felt like I didn't really care what happened to them. We also see a few characters who pop up a few times, which just seems out of place. I think we were meant to have seen more of them.  It wasn't bad though. It did a pretty good job on the action side, but they could have explained more about it. It seemed like the creator was inspired after watching Karas. That's what I though of first when I started watching it. It was entertaining, so I guess it did its job. It just needed to be longer. Probably then, this could have been an amazing OVA. 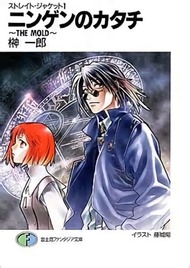