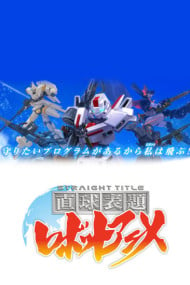 Mobile Century 8013... More than seven millennia after the fall of the human race, the many military robots remaining on Earth still spend each day engaged in an endless war. As the battle for dominance rages between the Rebellion Federation that controls Europe and the Principality of Sin centered in Asia, three young robots stand up to put an end to the meaningless war.

743 users are tracking this. Log in to see stats.

This is another one of those oddball gems that goes against the mainstream and makes its own bizzare little place. If you came here expecting a robot battle anime then you're in the wrong place. Honestly, if you came here expecting anything at all then you're going to be disappointed. On the other hand, if you're just looking for a good way to waste time while waiting for upcoming shows between seasons then Straight Title may be exactly what you're looking for. The setting of Straight Title is in a post apocalyptic waste, 7000 years after the extinction of humanity. Giant warrior robots battle for dominance over what's left of the earth because... No one told them to stop fighting. Enter three young robot girls: Fujii, Kato, and Mori. They meet in a wasted city and discuss ways that they can end the war when they discover ancient records indicating that the extinct 'humans' had a thing called 'laughter' that was useful for dispelling tension. Perhaps if they can re-discover laughter then the senseless war can finally end? Hijinx ensue. Everything about Straight Title is (intentionally) bland and unappealing, but to the right frame of mind it can be utterly hilarious on a somewhat hit-and-miss basis. For instance, in one episode the girls research the concept of 'cross-dressing' as a means to end the war, and run a full scale battle simulation with side-busting results. If you have a very dry sense of humor (or smoke a lot of weed) then Straight Title can be a fun show, reminiscent of some of the old shorts on liquid televison back in the 90's. This isn't a serious show, and it's not even campy. This is just the result of some cg animators and seiyuu screwing around for fun. But there's really nothing wrong with that, right? Personally I really enjoy Robot Anime: Straight Title, and I'd recommend that you grab an episode when you have the time and see if you like it as well.

This Anime is garbage, and if you’re looking for good anime out there – do yourself a favour and remove this one from your list. However, if you’ve come to just watch some cute girls casual laughing over things and messing around, then you’ve come to the right- or actually I should say: You might’ve come to the right place. I’m going to scratch the surface of this anime and give you the results of my analytical viewpoint, not even reasoning for it. If you want the arguments, look further below. But before that, here’s what you need to know about the show. First off, sorry, Sci-Fi battles and Mechas is but a small part of the show - basically only the intro. So just throw that out of the window. This show isn’t about story or character development. It’s about comedy. It sort of resembles youtube animated comedy where a bunch of people just stand around, talk and do silly things. The comedy is a bit dry and if I were to compare it to other similar shows I’d say Red vs Blue, the Halo youtube series (though I’m a bit of a fan, so I’d say not really). First off. Story. To that I say “what story?” and throw that one out of the window. Instead there is character progression, but not a lot, so throw that out of the window too. The writing? It’s meh, alright. It doesn’t really need good writing so go ahead and throw that out as well. As for Sound, I’d say there’s good and bad. The music is pretty alright, however most of the show doesn’t have any, and all you get to listen to are the girls. Their voices are perfectly okay and all other sounds do their job. As for Animation it is garbage! Or actually I should say the visuals, like the buildings in the background resemble rocks! The battle scene that keeps replaying resembles playstation 2 graphics, but the actual animation is pretty decent! Other animation is good too. The expression of the girl’s are… okay – two of them doesn’t really have facial expressions and the last one doesn’t show particularly emotions. The Characters are nice. Three robot girls with their each set of personality and skills complements this show well. Like I said earlier, not really a lot of character progression or deep backstory or whatever – they’re just people you need to laugh off. I recommend it: if you enjoy the comedy in the first episode. If you like it, great! Keep watching! If you don’t like it, then this show isn’t going to increase in value to you. It’s better to just move on. - - - - - - - - - - - - - - - - - - - - - - - - - - - - - - - - - - - - - - - - - - - - - - - - - - - - - Now to the nitty-gritty stuff with all the details of my analysis. Story. (Whoops, minor spoilers!) (1/10) Three girls whish to end the senseless robot war with laughter. That’s right, laughter. Every episode we get to see a battle scene (which is nice) and later how they employ their ideas and modifications to that same battle scene. The stuff is ridiculous and bull off course, but is in my opinion the peak of comedy in this show. Other than that, there isn’t much to it. The only story development is the exploration of laughter. And then there is some character progression…. Sound. (4/10) Alright I’m not a mastermind in this regard, so I’ll say what I can say. The only times there are music, is when the repeating battle scene unfolds. Basically just one song in other words, but the song itself is dramatic, epic and works really well with comedy later on. The voices of the robot girls make them sound like robots. They don’t seem fake and they are cute. Other sound effects works pretty much fine. Animation (3/10) (and visuals (2/10)) Not a mastermind here either. This show doesn’t really need a lot of animation, but the animation that are there is pretty smooth and believable. The girls express themselves well, though with the face expressions I find it okay. I’m sure a lot of other people might have problems with it. The battle scene however actually has some alright fighting and the animation there looks brilliant, but like I said earlier – Playstation 2 graphics! Actually, anything visual in this show outside of the original battle-scene looks crap, except for the girls which look fine. Buildings look like rocks, and (spoiler!!!) humans and other objects inside the modified battle scene look like they don’t fit in with the rest of the circumstances. Characters (3/10) Backstory – doesn’t exist. Not very believable emotions, but they get the job done. The characters themselves work well however for this type of show. They each have their own fixed personality and way of doing things – all adding to the silliness this show needs. In a way they’re all cute, and it’s kind of hard to dislike them by any of their actions or traits (more just of how the actual writing works). Character progression? No way close to other films and series out there, but still just a little, to see a change happening with the girls. It doesn’t particularly build up anything, nor does it give you empathy for the characters. Instead it works like a nice complement. Overall If I were to judge the show by stuff that is actually relevant for this show (comedy, writing, the characters, voices and sound effects, animation of the main characters) – I’d give it 4/10. When comparing it to other similar shows, I’d say there’s a lot more potential (storyline and character progression), so I’d give it a 2/10 from that. Personally, I came here looking for epic battles and good story, not really into comedy either, so there’s no wonder I was utterly disappointed. For people just relaxing, maybe doing something else and having the show in the background, or even just looking for something cute and laughable – this could be a good pick. And that is all I have to say about that.