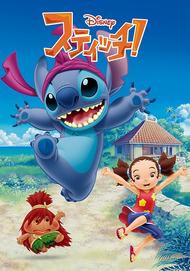 When evil genius scientist Dr. Jumba's creation - the blue, troublemaking creature known as Stitch - escapes and crash lands his spaceship on Earth, he quickly finds himself in young Yuuna's life. Together with Yuuna and her mother, Stitch explores and experiences the island that they call home, running into mischievous spirits along the way. And when Dr. Jumba himself and Earth studies expert Wendy Pleakley arrive at the planet to watch over Stitch, things become a lot more interesting! 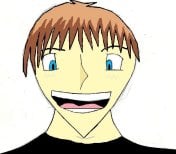 There was once a great little Movie known as Lilo and Stitch. It is considered one of Disney's best Movies (of modern Disney Movies) and thus made a lot of money and even made a franchise out of it, consisting of 3 extra Movies and a T.V. series. After the last Movie was made, every fan was happy, the series had ended and we where happy to be part of a great franchise. Disney on the other hand had other ideas, they wanted to milk the cow some more, until all that was left was the bare bones of what the franchise meant, so Disney of Japan decided to take the helm and produce an Anime to continue the adventures of everyones favourite blue Alien, the result, was a pile of s**t.  Story: The story starts off as Stitch is being chased through space by Jumba, Jumba then says the lines "626, just 'cause Little Girl (Lilo) has new Boyfriend now and is all washed up with 626, is no reason to be acting bad", that right there is the first indication of the direction the show is taking, it completely disregards the rest of the franchise, characters and plot and creates it's own sad, pathetic image of what the creators 'think' this franchise is all about (Although keep in mind I am aware that this is not said i the Japanese version, but believe me, it's not any better). The rest of the story is that Stitch and Jumba are sucked into a wormhole and are sent several years in time, Stitch goes to Earth and befriends a girl called Yuna (Who's personality is that of a jar of Jam), Jumba then meets Pleakely in the future and they travel back to Earth and find Stitch. The rest of the story is that there is this magical rock that grants you any wish you want when you've done forty-three good deeds and it so happens that Stitch (the good guy, mind you) wants to make a wish to be and I quote "Supreme Leader of the Universe", uggh, that was a mouthful, after the second season the plot has basically been lost and just consists of Stitch and Yuna on cr**py little misadventures. So yeah, you can really tell that the creators didn't give a rats a** about the plot, but who cares, they're laughing all the way to the bank. It's a very rare case when Japan ruins an American franchise, usually it's the other way around, but this Show is high proof of this. 3/10 Animation: Apart from some sharp Anime renditions of Stitch and other returning characters, the show does very little effort when it comes to Animation. The frame-rate is incrdibly jumpy, backgrounds are completely rehashed from other episodes (even if the characters are supposed to be in different locations) and the mouth flaps are highly noticeable on the American designed characters i.e. Stitch, Gantu etc. The art style for the Amercan characters where simply not made for Anime media. 2/10 Sound:  The music is very unmemorable, especially the American soundtrack. Oh that reminds me, Disney thought it would've been a great idea to rip out the original Japanese music and shove in cheap dubbing music, I'd almost say, they hired 4Kids for the job of dubbing, because not only does the background music suck, the voice acting is awful. The new characters are alright, it's the original characters, Disney where to cheap to hire the original voice actors (even the ones from the previous T.V. series) and that is a huge let-down, Stitch has an awful raspy and scratchy voice that barely resembles his original (and you can tell that the actor is trying to imitate the original) it's also really disappointing because this voice actor has been known for doing other roles not just in Animé but in cartoons too. All the other characters that return are completely stripped of their carismatic personality due to the awful dub, but the worst are, by-far, Gantu and Hamsterviel (I'm not expecting Tom Hanks or anything, but MAN put some effort into it). 3/10 Characters: Basically, if you looked up the word 'Generic' in the dictionary, I bet a picture of this Show would be right beside it. All the new characters are either irritating or just bad copies of other characters from the other Show, Yuna is basically Lilo, but they replaced the weirdness with spunkiness (and highly annoying) and Penny is just a more insufferable version of Murtle. Also it's the original characters, that are AGAIN a big let-down, Stitch has been altered from mischeivous yet soft centered Alien, to a one-dimensional jerk who ruins things, sees the error of his ways and fixes them (this is his character arc for nearly every episode), Jumba's just a smart guy with all the answers, Pleakely, I barely noticed was in the Show and Gantu and Hamsterveil are just joke villains. Only Rueben (Experiment 625) maintains a small fraction of his personality. Then there's Lilo, OH God, Lilo, she only appears fro a few secenes in one episode and yet her character is completely rewritten, apparently she is all grown-up, has a kid of her own (who looks exactly like her, Kimono and all) and tells Stitch that she would like Stitch to live with his  "new family" from now on. Whatever happened to Ohana, to quote Lilo (from the first Movie) "Ohana means Family, Family means, nobody gets left behind" I dunno, just more indication that these writers probably never seen the first Movie. 3/10    Overall: It's a show designed to milk a dead cow, with absolutely no appeal to anyone and at the exact same time, gives fans of the older series, the middle-finger. You've been warned. 2/10

Oh my god… they made another one? So this one is supposed to be after Lilo gets a boyfriend or something. Stitch, up to no good as always, jumps on his little flying car and starts to create mayhem. We have the same enemies, the same stupid sidekicks, and the same out of control main character as before, but with a different girl. They have the same storyline with Ichariba Chodei (Also known as Ohana) which is pretty much ‘meet ones cuz forever’. It’s pretty much a Japanese Lilo and Stitch… bla… Seriously, how do I talk about something that feels like it’s from America in storyline, characters, and concept? The only thing they use is that they are in some alternate timeline in order to bring a new girl and culture in. Well, there is one other thing… Stitch is collecting good deeds. I don’t know about you but if the little creature is doing good things for selfish reasons, I don’t think it works. Also, his goal is not really good so it messes things up. The show does base around Japanese demon mythology instead of aliens, but I don’t really care for this. And that is coming from a girl who loves supernatural stuff. It just feels really forced because it’s a ‘find and capture’ game with yokai instead of aliens now, although once in a while they get an alien or two. It’s good if they had one or another, but not both! The ending also didn’t have really a good closer as it left it open for the next season. How they made a second season out of this I have no idea. The animation is pretty much standard series animation for a show that was created as a rehash of the original rehash of a movie. Yes, that’s a lot of rehashing and it seriously feels old. The artwork is bland is what I’m trying to say. It just looks like they pulled this together in a short time although pretty clean as a computer created. Scenes are reused many times over. Disney signs are all over the place from items that Stitch puts back together to some references. It got so bad that the dub even made fun of it. It’s just too much even for Disney. I found that the opening was changed rather badly between the sub and dub. The dub just used clips from the show in order to make a stupid opening just as how 4kids does most of the time. The dub sounds like it was done by 4kids, seriously bad with a lot of off kid language. You can’t understand Stitch at all, though he should be able to speak a little better after living with Lilo so long. And this doesn’t make sense because half the time, stitch talks more then ever and others he acts like he doesn’t speak English. Now they do get better later on but it ends up to late. In fact, I think they even changed the voices for the dubbed version comparing it to the English version. It has the same childhood lesions as the show before, but they feel forced at times. Even the jokes are rather forced making me feel bored. The music is really bland with nothing that really stands out. The Japanese dub is so much better, actually having half of Stitch’s sounds actually being words. Seriously, most of the gibberish that he says in the dub is supposed to be complete sentences. 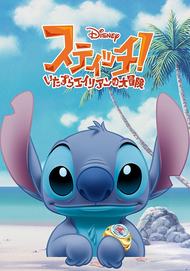 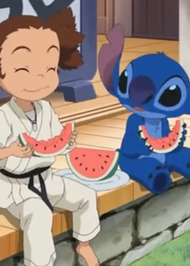 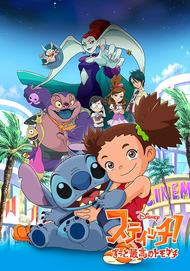 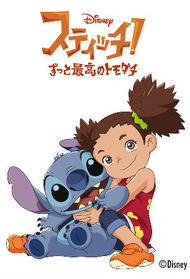 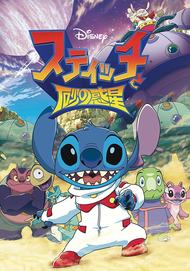 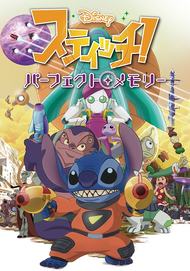 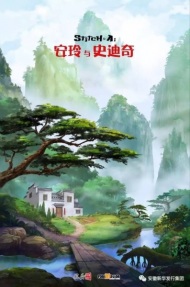 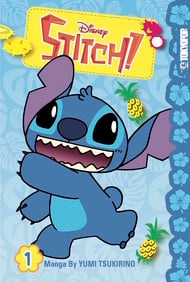 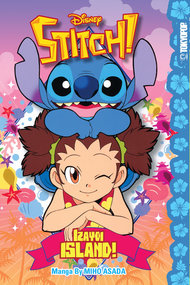 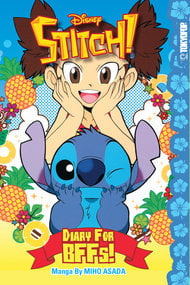 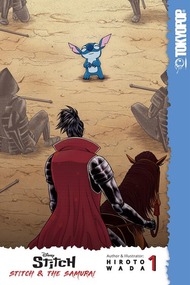 Stitch and the Samurai