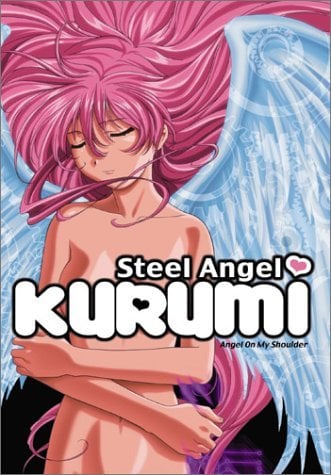 Welcome everyone to what is my first sick review.Not sick in a fun way,i mean i have ebola or something equally lethal.But i shall persevere and go on with my review of Steel Angel Kurumi.

But before we go any further i must warn you that this anime is so sweet it can cause type 2 diabetes and will most definitely ruin your teeth.Which is good news for your local doctor and dentist really,keeps the economy running.And i've got evidence to support my claim,just listen to the opening song,it practically screams sweeeeeet.But not only it's sweet it's also a robot-maid anime following the trend of Chobits and Mahoromatic except it has  brighter artwork and much faster pace.Each episode to be exact clocks at 14 mins or 11 if you take off the opening song and credits.

As for the story of SAK..It's the tested and true ol' formula boy meets robot girl,robot girl falls in love with boy,the boy is too much of a wuss to do somet....He's also a minor..Put them side to side and you'll see what i'm on about.Kurumi is the full sunday roast and Nakahito is...A Kinder egg..So how you wonder he scored such a hot babe?Well he accidentally activated her by kissing her...Accidentally..That may very well be a very good excuse if your gf catches you in the act,"I'm sorry babe i was reaching for me beer and i accidentally slipped in her pussy"..She then goes on to be his pet maid and from this point on Nakahito becomes THE MASTER and Kurumi his faithful little bitch.But the good things don't just end there.We also get more robot-maids to fill in the gaps.From the get go we also learn that these maids are called Steel Angels,which sounds like a porn movie to me,and their capabilities are out of this world.

Which brings me to the fact that SAK in between all the diabetes inducing sweetness has a rather serious plot underneath.It's like lifting your grandma's skirt and find that she's wearing a red G-String.Anyway,Kurumi is a maid robot with extreme strength and is extremely protective of Nakahito but unfortunately she isn't the brightest nut.In fact each and every one of them angels are..Let's say mentally challenged and leave it at that.Then of course there is Saki,who is Kurumi's sister,and has a major crush on her..And how do i know this?Well we are shown that she has some very sick fantasies about Kurumi.Anything more would be considered spoilers so let's wrap this up by saying that characters like that can be found in almost every other harem anime.

And now the big one,sound dept.And onto the biggest prob of all with this anime.Kurumi's VA.She has the most high pitched voice ever recorded in human history.This was especially entertaining cause every time she would utter the word "Kyuuuuuu" my ears would bleed.It was like Thor was trapped inside my head trying to hammer his way out.Other than that everything was normal.Except for the songs which are the worst example of J-pop.

As with all maid anime,i find it rather stupid that the maid character wears the same costume.And it's even more of a stupidity when you put these cute and moe characters in a serious plot.The maid stuff really makes it impossible to take it seriously.Which towards the end is the case when the story takes a rather dark turn.And it becomes even more difficult when you see that the fights are actually stills of fights.This is a big turn off.

All in all for me at least it was too cutesy and moe and i hate cutesy and moe with a passion.That said it was a very short anime but then again you can't enjoy even small length animes when you have blood pooring from your ears.

Great since of happiness till the end. This is at least worth watching once in your life time. The story does not have a great plot line but has intersting views for both the series.

Steel Angel Kurumi is one of the classic ecchi animes from the golden age of ecchi anime. Awakened by an omnyou mystic in training, Kurumi is a robot that is supposed to be a warrior of the future. However, she'd rather spend her time having fun and getitng to know the good side of life. Add to this another android named Saki that likes Kurumi. and Karinka, the android that wears an outfit described as "a stewardess on crack."

There's not really any major twists in plot here, but what makes it endearing is the relationship that forms between Kurumi and the mystic.