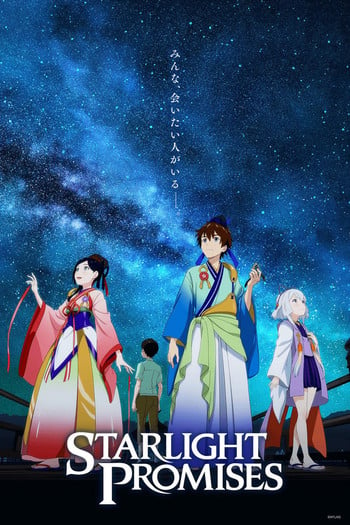 Yonekura Mugiko, senior in high school, is a talented exorcist dedicated to her work. One day, she was accidentally pushed and fell down a flight of stairs, resulting in amnesia! She only remembers things up till spring of her 6th grade year, hence: she has the mentality of a grade school kid… and forgets about her boyfriend, Kakurazaka Hikaru, a well-known exorcist as well. Mugiko and Kakurazaka will work together to exorcise spirits whenever they are hired, despite the little accident. Meanwhile though, Kakurazaka, known for being a perverted hothead, will try to regain Mugiko’s memory back… to be romantic with her once more!!

The night of his coming-of-age ceremony, Mihara Kouki lost his memory. The one thing he remembers is the moment "someone pushed him". Relying on this tiny memory, Kouki will face his past self while pursuing his own relationships (with other people) — as he chases the criminal, he yearns for these relationships(to create bonds with others)! He enters a human drama where he reels in the thread of memory!

A story of a high school girl and a white fox-boy that brings back memories you love!

One day, Hino, daughter of the Akiyama Shrine, finds a boy collapsed in front of the shrine gates. Though Kiriya, as he was called, would murmur "I want to go home...", he had lost his memories and forgotten where he should return. Two years later, they work in Maigoya, the Lost Child Shop, where they help the souls of lost children and search for Kiriya's missing memories.

A boy, with a virus which unlocks the primal beast, desires forgotten memories.

A woman is revived with no memories, however, she knows that she was trying to find someone that was dear to her. With the help of a detective, she has 49 days to find out who revived her because the condition to revive the dead is the other's death.

16 year-old Mishima Haruhi rescued a guy drowning in Yokohama Harbor, who has no memory of who he is or how he got there. Even more mysteriously, he seems to have extremely special powers including the ability to heal others. The only clue they have to his past is a bracelet he is wearing with the number "33" inscribed, but it is not long before people threatening to take his life force them to dig deeper...

Imprisoned for a thousand years, eighty-eight fabled beasts seek resurrection from their world so that they can unleash their wrath upon present-day Japan. And a band of young warriors would love nothing more than to let loose these beasts so that they can feast upon the human world. The only thing preventing civilization's annihilation is the Girl of Water, who is lost in the human world--without any memory of who she is! As the elemental warriors continue their search for her, they cross paths with another of their kind: Ishigami, the Man of Earth. However, Ishigami is one who wants to stop the dreaded resurrection...

A bittersweet tale about a girl who regains more than what she believed lost. Everyday a lone girl sits on a certain bench in a park trying to remember what she has lost. A young man approaches her one day and offers to help her find what she is missing.

Centers around a girl who is forgotten by the entire world at the end of each week. The result is a bittersweet and sentimental love story, where a boy and girl fall in love every week, only for him to forget all of his promises.