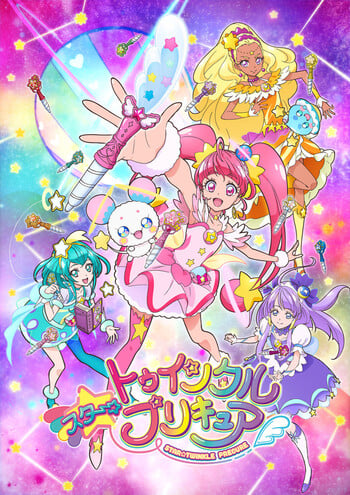 Coming on the heels of the epic success of Hugtto as it did, Star Twinkle had its work cut out for it. Hugtto didn't just raise the bar, it launched it into space, which incidentally is where Star Twinkle headed. Precure is however, still a children's show, so one must temper their expectations.

But not this much.

Precure has had weak seasons before. Happiness Charge is the one people love to hate. I haven't seen it. Mahou Tsukai as well. KKPCALM was, truth be told, kind of a slog to get through, and demonstrates decisively why there should never be more than five Cures.

So let me just summarize, I think it might be easier this way:

Things I love about Star Twinkle:

Things I dislike about Star Twinkle:

Things I hate about Star Twinkle:

Everything which is not listed: Simply "Meh". While others I discussed Star Twi with hated Fuwa (the fluffy mascot), for example, I found her to be merely "there".

And now, for the final report.

I still am of the opinion that Hikaru (Cure Star) is a flawed character.

But, before we go ballistic, some thoughts about the 'flawed character' in the Pretty Cure universe.  After sixteen rounds going on seveneen, we find the flawed character a steady staple to the twists and weaves in the plot.  Some noteworthy members of this group.

1) The 'previous villainess' Precure (Cure Passion, Cure Beat, Cure Scarlet, and we may add Cure Cosmo to this list).  Often hard to reform till some battle or showdown with the lead precure of the team (e.g. Cure Peach, Cure Melody, Cure Flora, and let's add Cure Star) convinces them of their foolish course and encourages them toward achieving good as a Pretty Cure.  Once the pangs of guilt are gone, they turn things around.

2) Cure Moonlight.  A Prety Cure who had failed, and has allowed her failure to haunt her for years.  Good at giving Cures Blossom and Marine advice, but slow to commit to the Precure cause.

3) Cure Princess.  A literal basket-case when we first meet her.  Easily beaten as long as she tries to go it alone, Princess must learn the basics of friendship from Cue Lovely and strive to overcome the consequences of a poor decision in her life which has alienated her from Cure Fortune.

4) Cure Blossom.  She needs to overcome her introversion as leader of Heart-Catch Precure.  But she mus do it without coming to hate her former self, the reason it takes longer for her to defeat her alter-ego in the test of being the strong Precure she needs to become.

With this said, Star Twinkle Precure limped through the season due to the fraility of the flawed character.  And, face it, all five of the girls in the team were flawed.

But, that's good.  It allowed the series to meld slowly toward a dynamic finish.

1) Cure Star (Hikaru).  As I stated prior to this, the girl's a little dinghy.  But Lala explained Hikaru's problem.  "You're you!"  A star that must learn to become part of the constellation.  In the moment of crisis, it would not be Star's resolve, but Fuwa's self-sacrifice that will save the universe.

2) Cure Milky (Lala).  Lala is an alien who is quite repressed in her family of go-getters.  Always uncertain of herself, she relies on her mentor AI for information.  Until she learns to have more confidence in her abilities.

3) Cure Soliel (Elena).  A girl wih a gorgeous smile ... without the joy to enforce it.  Once she comes to terms with the ramifications of being the one source of happiness in her family can Soliel cope with the responsibilities of being the 'smiling girl' which inspires her classmates.

4) Cure Selene (Madoka).  An intelligent girl with a grand future, and a father who is determined to make all the decisions in Madoka's life.  Once she gains the courage to refuse her father and make her own decisions, things fly better.

5) Cure Cosmo (Yuri).  She's a crook, and a difficult one to reform at that.  Slow to trust anyone of the Star Twinkle Precure, she sticks to herself.  Her mission to save her planet from immobility is her driving force, and once she allows Star et. al. to help, she finds she can hope for success.

That's about it.  Five weak characters who learn to find strength in each other.  And, like Hugtto! Precure, their story ends in the future.  Both teams separate, one by time, the other by distance.  They'll both be seen in future All Star Precure movies (maybe), but now there will be massive problems of chronology and concurrence.  How to gather teams together when it is plain that certain teams are de-activated?

Star Twinkle Precure still is hampered by a fudgy epistemology.  "To be what you wish to be."  Just a matter of Twinkle Imagination.  Hikaru's search for the truth is still manic, at best.  Once one learns that the truth is less like the Good Ship Lolly-pop (SMA) and more like blunt force trauma ...  One's aptitude and potential plays more into the equation than a sense of zeal.

I'm glad that Hikaru grew up to be Japan's first astronaut, but what would be the odds?