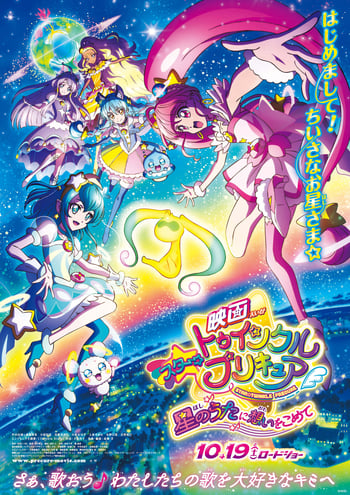 With Star Twinkle series charging to its conclusion (only Cure Star needs to be zapped with the Twinkle Imagination upgrade, then watch out! Darkenest ... who should be showing up in force for the ultimate showdown ... call it Toei timing) into its last episodes, I'm thankful that this series finally is gaining some traction.  But, I feel that Star Twinkle is not one of the mega-seres best conceptions. Then the Star Twinkle Movie (Wish Upon a Singing Star) comes along ... and it's a tour de force! Not strange.  I didn't think Dokidoki Precure was a coherent piece, but the Dokidoki Precure Movie ... wowsers! There is a complexity to the whole plot, made all the more unusual as is plays on a divided team of Pretty Cure who enter the first scene in battle against the Notraiders led by Tenjou.  But, as they trounce the bad boys yet again, a near-by star explodes, spewing star debris about the cosmos.  One tiny particle gets caught in Hikaru's hair. Next scene, Hikaru and Lala are slumbering in bed.  Yuni is in flight, avoiding capture by Officer Mary Jane (think of Officer McGruff having a younger. more energetic sister).  Question:  If Yuni takes the rocket to make good her get-away, how do the rest of the team make it back home?  Madoka and Elena are off to Okinawa on a class field-trip.  So, split up for that day, Hikaru and Lala are roused from sleep and proceed to school in the typical Hikaru-esque mode ... running late and in danger of being tardy.  But, with the use of a Miracle Light (odd, the beginning of the movie gives only two rules for the use of this dangerous tool 1) don't throw, 2) don't look at it closely ... after this, use at your own peril) the girls are suddenly transported to campus.  This is the unique particle that has gotten tucked away in Hikaru's hair ... a Star-Drop.  Because it has the power of teleportation, Hikaru and Lala later find themselves in Okinawa for a brief, inconsequential visit with Elena and Madoka.  Except that, on discovering the Star-Drop, Lala finds that it is not a thing but possesses a personability which makes Yuma, Hikari's name for the new bright alien, an entity to be respected ... and understood. Bring on the bad guys, in this case, five bounty hunters who are after Yuma for the power connected with her.  As Yuma morphs, she eventually becomes a composite of Hikaru and Lala.  This is important, for a Star-Drop develops into a star, a planet, a galaxy determine on the one who influences it/her/him.  It may be a gentle entity or a dangerous one.  And, while the Pretty Cure in time defeat the bounty hunters, one of them, Burn, seizes Yuma and transfers his maliciousness into her.  Yuma freaks and transforms into a space anomaly which threatens to consume the earth.  Hikaru and Lala, the only good influences Yuma have, battle their way past a second wave of greedy bounty hunters to enter Yuma and sing to her of her role as an up-coming galaxy. The animation is top-notch, though the story limps.  Lala, who understands the ostracism of being the alien in the heighborhood, doesn't have that same inital compassion for Yuma.  The transfer of the girls to Okinawa and the build-up to the fight with the Star Hunters is clumsy, especially drawing Yuni and Mary Anne to the site.  Characters can be confusing and inconsistent.  But the action thrusts at you suddenly, and petty details like this are lost for the moment. Star Twinkle Precure is the first series I watched in real time, not one a day when viewing any of the other series which takes a month and a half in normal viewing.  This gives Star Twinkle the dis/advantage of pondering over the plot in a week's time, probing for the weak spots.  It's great to watch a slam-blam movie where the familiar characters contest with unknown quanties for a simple seventy minutes of enjoyment.  Contemplation of the results (this review, for example) is a luxury I enjoy. Long live Star Twinkle!  Long live ... whatever's next. 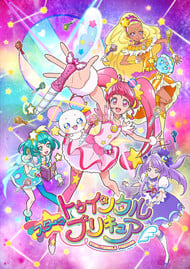