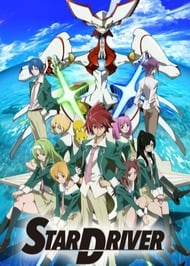 Star Driver takes place on the fictional Southern Cross Isle. One night, a boy named Takuto washes up on shore swimming from the mainland. He later enrolls in Southern Cross High School as a freshmen and makes new friends. However, beneath the school is a group of mysterious giants called Cybodies, which can be controlled by humans in an alternate dimension known as Zero Time. Takuto, The "Galactic Pretty Boy" , finds himself dragged into opposition with the "Glittering Crux Brigade". Glittering Star Cruciform Group), a mysterious group that intends to take possession of the island's Cybodies for their own purposes as well as break the seals of the island's four Shrine Maidens, whose powers prevent the Cybodies from functioning outside of Zero Time.

I don't know about this anime. It had the potential to be something great in every sense of the word, yet it put up with excelling only in being, as everyone says, ''fabulous''.For me the biggest highlight in Star Driver were the dynamics between the protagonist trio: Takuto, Wako and Sugata. I really enjoyed these three characters as the show went on and ever since the beginning they left a good impression (for example, seeing Sugata's appearance I would have thought he'd be the usual emo stoic dick whereas he was none of the sort) and they grew on me more than anyone else. The rest of the people doesn't stand out nearly as much, but still, before I knew it a solid enough cast had assembled: you get to know fragments of their pasts, their motivations and personalities. By no means is it managed as well as I'd want, but it's satisfying.Anyways, the trio was very cool and I really enjoyed their interactions, both the serious and goofy ones.Another strong point of the show is, most obviously, the animation. Crisp graphics, vibrant shiny colors, fluent movement and a gar vibe à la Gurren Lagann. My only gripe is that they reused animation way TOO much for things such as Takuto's entrances to the battles. Well, actually repetition is one of the biggest flaws in Star Driver, which I'll mention very soon.As for the OST, I could say the same, but while what I heard was nice, it was also scarce. The soundtrack outside the fights presented more variety, but we all know that the themes that stick in our heads the most in a show like this are the battle ones. And sadly, they were way too meager and overused. Take for example Monochrome, which was used the same way for like 7 or 8 episodes straight (same with the other ''beginning of the fight'' themes), or the one for when Takuto finally slashes his weekly enemy, which was pretty much the same galaxy-ish theme the whole time. OPs and EDs were all good, but the only one I actually sat through every time was the first opening. Gotta love Aqua Timez.Well then, I've mentioned the show's good points, so now we're in for the shortcomings. There's a reason why SD can't become a top watch in my list and it's a pretty basical one: it is repetitive as hell. Some people might find it to be entertaining, or to add to the experience, but in my humble opinion it's about time anime shows would stop relying on formulaic episodes and stick to a more linear, less monster-of-the-week-ish plot development, which will always, ALWAYS work better when it comes to an anime such as this that's trying to be epic.Go no further than Gurren Lagann. Would it have got such a huge fandom if instead of progressively developing the story, the whole 27 episodes had consisted of Simon and Kamina destroying random anti-spirals with their manly mecha? Hell no. Probably not (well, who knows, people are very simple after all). TTGL had more than awesome fight scenes and generally compelling characters going for it. It had a good enough storyline that advanced quickly but surely to an aimed finale, instead of using a bucle fight structure while slowly building up the characters like Star Driver does. It's in my opinion a much more engaging take of the same kind of action flick.All in all, Star Driver is quite the mixed bag. It has the ingredients to create something amazing but partly fails at doing so because the producers chose the easy way to produce an anime over the span of 25 episodes.The ending was pretty epic. In retrospective I wish many more aspects had been more fleshed out, but as a thematical conclusion it works... fabulously. 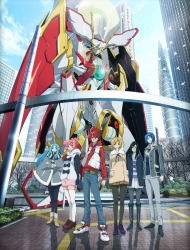 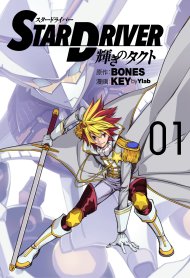