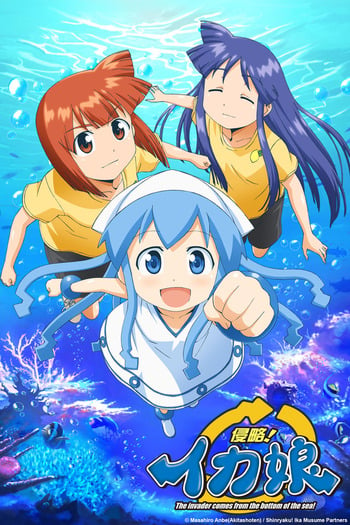 Squid Girl Episode 10 - Isn't that a Teru Teru bosquid? / What squidsn't there to like? / One! Two! Three squids, you're out!

Wishing for sunny weather so he can go out and sketch for his homework, Takeru makes a teru teru bozu. Being told that since he's in this situation, he should draw what's here, Squid Girl says she will help. After taking the pen for herself, everyone is shocked at the outcome of the image she drew! Sanae attempting to embrace Squid Girl and harshly getting smacked away has become a daily sight. Eiko worries about this unhealthy behavior in Sanae and urges her to abstain from Squid Girl. She inspires Sanae by telling her it will get Squid Girl to like her, but it's self-torment beyond her imagination. The pitcher for Kiyomi's baseball team falls ill just before a practice game. Squid Girl says she will play as a substitute on short notice, but not knowing the rules, she makes defensive errors immediately. Moved by Kiyomi's kind words and encouragement after her errors, Squid Girl demonstrates the power of a squid!

Who's up for a squid-vasion? / Hold on a squid, aren't you a compatriot? / Aren't I just the squiddiest?

Wait a squid, aren't you on my side? / Up for a squid-celebration? / Wanna play with this squid?

Aren't you a fraidy-squid? / You're the squid's sworn enemy, aren't you? / Squidzooks! Aren't you a new recruit?

How much is that squiddy in the window? / Ride 'em, Squiddy! / You're phonier than an 11-tentacled squid!

Not from this sea, are you? / Why not join the school of fish? / Wouldn't having a pet be squidtastic?

Up for an inkredible Hero Stage Show? / Squidn't you be studying right now? / Is this inkfatuation or love?

Focus your tentacles on her! / Feeling inkuisitive? / A squiddle work never killed anyone.

Aren't you a squiddle under the weather? / Ink that a new ability? / Squidn't you bring an umbrella?

Wanna doorbell ditch, squiddo? / Can squids put on make-up? / Holy squid! Is that a secret weapon?

Isn't that a Teru Teru bosquid? / What squidsn't there to like? / One! Two! Three squids, you're out!

I ink that's a doll? / Isn't that fishy? / Squids to match my mountains.

To the rest of the world, Umaru is kind, smart, and the perfect high school student. But her brother, Taihei, knows the truth: at home, she's a bratty, slovenly, lazy girl who eats junk food, plays video games, and throws tantrums when Taihei won’t buy her manga or do what she wants! Now, in addition to working full time to support their household...

Squid girl and Umaru-chan!? It's too good to be wrong! All of the similarities are there: the cuteness, the chibi, and like the guy above me, the annoyed caretaker.

I agree, their designs are based on animals, they have chibi forms, they annoy at least one person around them while also having a share of admirers and challengers, and suprisingly, squid girl is also somewhat of an otaku too.

Himouto Umaru-chan and squidgirl are pretty much the same anime with a few differences in flavor. Mostly because squidgirl is more fish based, and far more outside of reality. Squid girl is a little less lazy then Umaru, But with all the Ecchi stuff that has flooded the anime scene lately they are a nice island in a sea of boobs. Not that boobs are a bad thing but when the anime sells it'self on nothing past sex it gets rather dull pretty quick. These shows don't do that. They are more Oh my god that is so freakin cute I think I gotz daiahbeetis. And use that to comedic effect. They have a lot more in common then that just watch the intros of both of them and you will see that.

Slightly thick protagonist? Check. Restaurant humor? Check. Casual violence? Check. In addition, Muteki Kanban Musume also has multiple standalone (or loosely connected) installments within a single episode giving it a similar sense of timing. If you're looking for more fluffy, high energy humor in the same vein as Shinryaku! Ika Musume, you should give Miki and the gang a shot.

Both anime feature multiple random comedic short stories in each episode. While Ika Musume threatens world domination, she's pretty much held in check by Chizuru, whereas Miki's mother can only keep her in line through the occasional violent beating. The heroine's in both shows are lacking in the brilliance department. While Miki has more of a penchant for violence, Ika Musume has more of a naivety from having lived in the ocean her whole life. Both humorous shows, but while Ika Musume has more endearing characters Muteki Kanban Musume is a straight up gag anime.

After her grandmother dies, thirteen year-old Kana Nakamachi runs away from home convinced her absent parents will sell her. She tries to find a job, but with nowhere willing to hire a girl of her age without parental consent, she is back at square one. Then, to make matters worse, a young girl called Yume crashes her bicycle into Kana and knocks her...

Both of these rather moe titles are about strange happenings in normal settings. Sure, Kanamemo's strangeness is lesbians while ika musume's is the much more believable anthropomorphic squid girl. But other than that, these shows are about the slightly off daily life in a slightly off world.

That and they also have some rather serious bits too, also completely at random