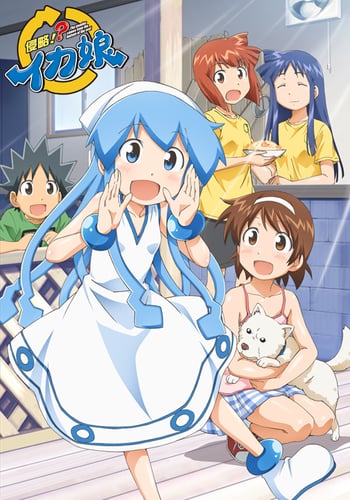 While the setting is quite different between each other, both are episodic anime that share the same random and lighthearted humor. So if you liked one you'll like the other one too.

Akari has decided to send a video letter home showcasing Neo Venezia at its best and her life as an undine. From showing her daily activities such as maintaining the gondolas and airing out the oars, to introducing her closest friends and the three great water fairies, Alicia, Akira and Athena, the young undine is determined to share her love of the planet Aqua with everyone.

Akari awakens one morning after having an unsettling dream - one where she has fulfilled her goal of becoming a Prima, yet as a result of her succession Alicia is no longer around, and there's an eager apprentice on her hands she has no clue how to handle. Taken aback by the realization that this is what must eventually come to pass, Akari spends her day trying to come to terms with this future reality, and learns a little bit about Alicia's past in the process.

When they’re not working as Undines, the girls of the Neo Venezia Gondolas like to take it easy and relax. Akari, Aika and Alice discuss love, life and ice cream during a pajama party at a hot spring, while Atora and the others buy too much food for lunch. With the girls attempting to win a game of soccer and telling ghost stories on a hot summer night, they manage to have the time of their lives no matter what they do.

Amanchu! The Story of the Promised Summer and New Memories

Mermaids are known worldwide as bewitching mythological creatures of the sea. Despite their charms and otherworldly powers, daily life for these beings comes with everyday problems. But there's nothing that can't be overcome with the support of friends. Follow the adventures of five young mermaids as they explore their town and the world around them in this delightful slice-of-life series that takes viewers to an enchanting world beneath the waves.

The Boy and the Blue Sea

History threatens to destroy the friendship between Hiroshi and Adel whose countries were once enemies. Will Adel forget their quarrel when Hiroshi is in danger?