You Keika, the heir of an old famous family of Exorcists, is stricken with poverty after losing his parents and struggles as a street fortune teller and a part time computer tech. One night at a junkyard, he meets a mysterious and charismatic Exorcist, Tanmoku Ki, who is fighting an evil spirit. To compound his misfortunes, he gets hit by car and becomes a ghost. Tanmoku Ki appears and asks You Keika to make a “pact” with him to fight Evil Spirits together. Here starts the friendship of our heroes!

I will try to be serious about this review, and give as little spoilers as possible. Alright... I know this "anime" (actually donghua) is kind of disliked because it's Chinese, and some people just don't like to listen to the language, and they made a Japanese dub called SpiritPact and even went as far as changing the title for this reason.  Well... I think they shouldn't have, because a lot of the jokes do not have the same impact, just like when a Japanese anime is being dubbed into English.  I personally like the Chinese version better, and I just don't understand why the Japanese version gets so much more attention than the Chinese version even though the Chinese version is the original, and was even created from a manhua(Chinese version of manga).  I get it, it does sound more natural to hear Japanese dub because there are a way more Japanese cartoons than Chinese, because China only started this kind of animation recently, and borrows some of the Japanese animation techniques.   Japanese dub only sounds more natural to us because we are used to it, so why can't we try get used to Chinese dubs?  There will be a lot more Chinese donghua coming out in the future, and some of them will genuinely be good, but they won't be watched because they are not in Japanese dub? Ok now that I got my argument out of the way Its time for the actual review part lol Story: 8/10 The DongHua did not cover all the manhua because it isn't finished yet, but I can say that Soul Contract's story is quite good for a Shounenai anime.  The comedy's is funny (made me laugh) and the plot (and I mean real plot not "plot") is very interesting.  The fight scenes made me want to know what will happen next, and has some hot scenes thrown in 😏Like it's supposed to (Duanmu x Jinhua is life). I am very much in love with this anime and would like to see a season 2.  There's not much I can say without spoiling anything so I suppose I'll just have to leave it at this... Animation: 7/10 The animation is certainly not bad for a DongHua and looks a lot like Japanese anime animation.  It's not outstanding... but I mean at least it's better than Gakuen Handsome and it's not cringey right?  It's obviously not as good as some such as Fate or Your lie in April, but it's good enough in my opinion. Sound: 6/10 The sound is probably the only part that is lacking a bit.  Sometimes the voices don't match the mouth flaps (lots of people hate this part -_-), but really, in a shounenai anime the ships and plot (both types?) are supposed to draw you in.  I'm not an expert, but maybe it's hard to voice act in Chinese; plus Chinese DongHua really just started out, so I don't see why they can't make some mistakes. Other than the voice acting though, I thought the opening was pretty good.  I ended up downloading it, and I usually like it when an anime has a good sound track, like Haikyuu. In case your wondering the opening is called Wu Xian Da. Characters: 9/10 ❤️❤️❤️❤️❤️❤️ Yeah so in my opinion the most important part in a Romance and Shonenai anime is the characters. Soul Contract's characters are actually very interesting, and made me keep watching to find out their past and histories and stuff.  Yang Jinghua especially, his ancestor's supposed to be this super badass exorcist/bodyguard/swordsman person, and I would like to know more of Jinghua's powers.  And Duanmu is also interesting because of his family situation, and how his powers work, and of course we need some more 😏(Well I dunno about you but I do) Well to me I really enjoyed this anime and I was hyped about it for a week even though it only took me like, not even 2 days to watch it.  Another reason I enjoyed the Chinese version of Soul Contract is because I like to hear hear their names being called in Chinese.  I do not hate dubs though, I love Funimation!  But what I do not like about this situation is that some people are not even giving the Chinese version a chance because "it sounds like shit, I think I'm allergic." We should try to get used to Chinese dubs at least, or in the future, we will miss out, big time.  It's a new culture trying something new, and I support it.  As for the review I dunno if it helped, but tbh the only way your gonna know if you like it is to watch episode 1 to find out for yourself.  Or try the Japanese version? I don't know your preferences and I won't be rude. Shit I worked on this for and hour and I have an exam tomorrow rip me i hope this helped though Edit:  November 2017 -  Lol told all of you, The King's Avatar was a pretty big success and it`s Chinese... Okay I wont be smug lol but I can help it XD

Technically Spiritpact is not an anime. It is instead Chinese animation orginally titled Ling Qi or Soul Contract. I actually stumbled upon this animation while it was still only in Chinese dub and tried to watch it because it was marked as Shounen-ai and that's a pretty rare genre and I tend to take what I can get from it. However, I couldn't get passed the Chinese dub. I'm so used to Japanese that I just can't get over the difference...  Then I heard they were making a Japanese dub version of this series and I nearly jumped for joy! xD  The plot circles around Tanmoku Ki, the head of a very powerful exorcist family who stumbles upon You Keika while in the middle of a job. Following their encounter You ends up getting hit by a truck and kicks the bucket (i.e he dies). So imagine You's surprise when he wakes up in the hospital to be told by this crazy guy that he's dead, and that he's now a spirit and that he wants to form a contract with him. Oh, and You now looks like a teenager instead of the 23 year old he died as because spirits choose to remain behind in the form of a significant point in their life. Yeah. Things only get more interesting and more complicated from here. Don't believe me? Toss in demons, a sword with a strange past tied to You's family, and a coup and you begin to see what I mean. The animation quality is damn good. I realize that when doing the Japanese dub they squished two episodes of the Chinese version into one (as the episodes were only like 10 minutes long) and touched up some of the animation. I have heard they removed what they considered minor scenes so if you want the full impact of this show then try out the original Chinese dubbed version. The characters are pretty much hit or miss. I actually like Ki and You, but I didn't really understand the need for Ki's fiance. And you get two-faced characters in just about anything you watch so... wasn't really surprised to see a few of those tossed in here. Definitely not fond of them, but they add to the drama so, you deal with it. All in all, I think people really underrated this show. I enjoyed the hell out of it and if you're a fan of shounen-ai, I'd say give it a go!

So, first things first if you are thinking about watching this but are put off by the fact that it's tagged yaoi (Boys Love), then don't be. There are few to no actual yaoi scenes or moments in the anime. More than anything, it's just two strangers who through a series of unfortunate events, grow and bond together, and ultimately become the best of mates. But, if you are looking for an explicit yaoi, then sorry, this may not be for you. Now, as far as the review goes: I will be brief. The story was well written and the same goes for the characters, who btw were genuinely funny. I think that's one of the anime's defining points - it is seriously comedic and it can really make you laugh at times. It can also be quite serious, especially on the topic of death, so those scenes rather moved me. I have to admit, I cried a little. The fight scenes are not AMAZING, but this isn't an all out action anime, so don't expect top of the line effects - but they served their purpose. All in all: Spiritpact was pretty awesome. Sadly it is quite short, but they do leave you with a small cliff hanger, so if the anime did well, I am sure we can expect a season two. 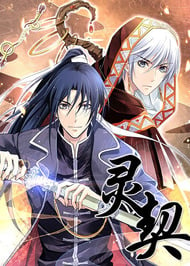