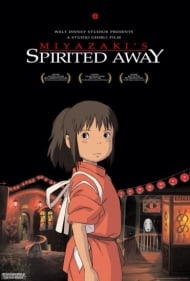 StorySpirited Away is truly a trip into the imagination with excellent animation, a whimsical execution, and a storyline that leaves one not only liking the characters and progression of events, but also with warm emotions with the overall atmosphere. The movie introduces a young girl named Chihiro as a sullen 11-year old who comes into town with her parents for the first time, as they're moving into a new neighborhood. When the three come across a strange tunnel, they pass into what seems like a carnival...and her parents end up becoming caught in the strange place with a curse. As a result, Chihiro must find a way to turn her parents back to normal and leave the captivity of the carnival...but not without meeting her share of witches, spirits, dragons and many other creatures to boot. Chihiro follows Haku, a boy who orients her around this strange world, but with an identity that the movie comes to unfold in its overall progression; I believed that Chihiro and Haku's chemistry made the movie quite sweet, even endearing. One could say that this film focuses primarily upon very abstract presentation to entertain in its overall story, from the creatures to the environment of this seemingly unstable carnival-revealing places like a machinized factory, a bath house, a dojo, a farm house, among others. Like Miyazaki's other films, it reaches into a broadened sense of imagination, appealing to an audience both young as well as mature. I wouldn't say this film is for the very young (as the odd looking creatures and events may be scary for young children, but those of maturity, even around the age that Chihiro is in the film, would be able to appreciate it. The movie also, in its progressive length, follows Chihiro with a keen eye, and yet allows the focal point to shift well in the many odd twists and turns she encounters, and you actually come to really care and connect with the characters despite the film's abbreviation. AnimationThe animation retains a rather classic style similar to other Miyazaki films such as Princess Mononoke, My Neighbor Totoro, or even Nausicaa Valley of the Wind. Spirited Away, however, does well with its coloring and fluidity to make it fit right along with contemporary animation standards, just with a different style of character design and settings, the latter of which i found quite impressive in meshing together this abstract atmosphere.One thing to keep in mind, the character designs are quite intentional, if the witch, for example, looks downright ugly, then that's a part of the emphasized environment - the character and overall designs were very consistent, and I couldn't complain in most regards. SoundFrom a musical perspective, only the settings of the BGM were really standout to me, very relaxing when the more serene and heartfelt scenes came into play, and more upbeat when the comical or intense rush of events emerged. I wouldn't say I was all too fond of the ending theme song, though it was quite nice from a lyrical standpoint.Voice acting in both the Japanese and English perspectives were top-notch. The Japanese version had strong leads in Miyu Irino and Rumi Hiragi, as well as strong leads in the English version (Jason Marsden and Daveigh Chase) for Haku and Chihiro respectively. I think the strong voice acting really enhanced the prescence of each character, and granted that Miyazaki's stories are very character driven, it shows no lapse in quality along that regard. CharactersThe characters in Spirited Away are easy to follow and adapt to, even at the expense of brevity in which a film may allot. Miyazaki's format of storytelling allows the characters to come center stage and the journey in which they follow and come into their encounters are something the viewer can enjoy as "along for the ride". I actually think that character-wise, Spirited Away is one of Miyazaki's finest in allowing us to look into Chihiro-she's at first a rather aloof girl, overly cautious, as shown when she tries to tell her parents to go back, and also in terms of her encountering this world of variant beings with timidness. Yet, as she comes to know her surroundings, follows Haku and befriends quite a few interesting faces (including a spider-armed man who claims her as his granddaughter at first and a woman who helps her along in working for her keep), she develops an inner sense of strength that one sees even towards the film's conclusion. It feels like a coming-of-age story in an abstract format.Secondary characters are quite as enjoyable as those that take full stage as the primary, in fact, they are what enhance the atmosphere of the overall film and it's difficult to separate them from the story as their numerous encounters revolve around the story's framework. OverallI would definitely recommend Spirited Away as a title to view. It's one of the most imaginative anime films I've seen to date and also one of my favorites overall.

Spirited Away may very well be the greatest animated film of all times. Not just in anime, but in the most general sense. The storytelling is perfection itself, the characters developed to the perfect point, the animation memorable and an artistic milestone that combines the traditional Japanese style with more modern techniques, the soundwork fantastic on every level from the brilliant voice acting to the flowing soundtrack. If you do not love Spirited Away, then the part of you which has a sense of wonder isn't working right. People who have rarely seen anime will be quick to call this "the Japanese Alice in Wonderland", and in many ways that is true. Those familiar with Studio Ghibli's work will say that Spirited Away is "the most westernized creation of Miyazaki", and in many ways that is true as well. And yet, Spirited Away has so much of its own character that trying to nail it down to such a small box is missing the point entirely. It is a timeless story, that has been retold many times, the child in a strange land on a quest to get home, but is both an amazing telling of the tale and a unique one so full of character that comparing it to others will always fall short. The artwork is so powerfully unique, using bastract themes, gross exaggeration, and clean and subtle backgrounds that it will take your breath away. Details are abound where needed, and Spirited Away is famous in certain aspects like the memorable depictions of food, and are nearly absent in other areas. While technically the world has advanced plenty in the past decade and a half, the artwork is absolute genius at nudging the viewer between a dreamlike state and a mundane setting. The soundtrack is subtle and is just so right for what the film does that it is only matched by the cream of the crop of Hollywood productions. The characters are magnificent. Chihiro is one of the most memorable characters ever created, with subtle and deep character growth and tons of personality. The side characters build upon archetypes, and not only have their own behaviors but also represent different aspects of life. Not one character is out of place, but rather they cast makes the world built in Spirited Away as powerful and memorable as it is. I will not bother breaking down the details more than this, because that would cause me to gush over every tiny detail, every interaction, and spoil the movie for everyone as I will go on for thousands of words. Spirited Away is as close to perfection as I have seen in animation history. While cynics can disect the tiny details and find flaws in everything, by looking through that lens and not with a sense of wonder they have failed in enjoying what may be the most honest, powerful, and engaging tales of the modern era. If you haven't watched Spirited Away, then you are missing out on one of the greatest creations of all times. If you have watched it, why not do it once more? 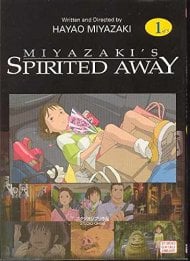