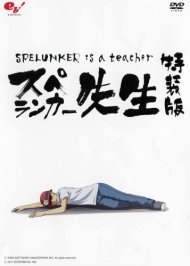 There's a new teacher in town – Spelunker! This unusual man is anything but a typical instructor, giving speeches about traffic safety to the students, reacting strangely to a humidifier, and enjoying lunch – albeit with ample condiment mishaps. With such a bizarre new role model to learn from, Spelunker's students will never be the same!

750 users are tracking this. Log in to see stats.

When it comes to a bad piece of media, whether it be a movie, TV show, music, or even anime, the worst thing to have to sit through is a bad comedy. When it comes to every other genre, there is at least something to enjoy or appreciate, like it's atmosphere, technical quality, soundtrack, maybe a great or fun performance or two, or just the potential of it's premise. But with a comedy, it relies entirely on it's jokes, and when it's jokes aren't funny, it has literally nothing else to go on. You're not going to watch a comedy got it's plot or special effects, the jokes are the entire reason that you're there. And that's where Spelunker Sensei comes in. Based on the Spelunker video game franchise, Spelunker Sensei (ENG: Spelunker is a Teacher) is a one shot OVA release in March of 2011 about a man named Spelunker being a teacher in your standard Japanese High School. And that's pretty much the entire premise. Unfortunately, there aren't really jokes in Spelunker Sensei so much as there is one joke, singular. Spelunker dies really easily, and he continually dies over and over again from things that don't normally kill people. It's literally only the one premise for a joke repeated over and over again for 30 minutes. The OVA could have been Spelunker telling stories of him dying in various absurd or silly situations, but everyone points out that he couldn't have died because he's standing right in front of him, and people point out that maybe he has a faulty memory or say that he is making up funny stories, but we all now that he was telling the truth the entire time, and maybe at the end of the OVA, someone finds out that he wasn't lying. At least it would have been something. Somehow, they managed to get Tomokazu Sugita, who is known for his roles such as Kyon from The Melancholy of Haruhi Suzumiya and Gintoki Sakata from Gintama. You don't get someone like that unless you actually did have a budget. Did the guy owe someone something or lose a bet? Maybe they had him in studio and had him spent an extra hour in the recording booth. I'm guessing that this is where the budget went, since the animation for the show is pretty basic. This was released 2 years after "Spelunker HD" was released on the PS3 in Japan and around the same time as the European release for the game, and a year after a Japanese exclusive version of the game called "Spelunker Black" was released, so I'm wondering if it was released in tandem with that game to promote it or was just made off the success of the game. But when it comes down to it, don't bother watching Spelunker Sensei. Even a lot of the infamous bad anime out there have more to laugh at, even if was unintentional.