Speed Grapher is a very interesting concept that was unfortunately handled by GONZO instead of a more competent studio. Although the characters and the themes of the scenario are amazing, the plot is all over the place and ends up being almost unrelated mini arcs with monsters of the… erm, month? Apart from the studio, the director is not someone to look forward to. Sugishima Kunihisa has in his roster some of the lamest titles, such as the old Tekken movie, the first YuGiOh series, all Bayblade seasons, as well as the totally boring ninja show Nabari No Ou. But all things considered, this is by far his best work to date. The story is about money and fame and how stupid or inhuman people can become in order to get them. There is this secret club of snotty rich and famous folk who acquire superpowers by the kiss of a maiden, and then they use this gift to have fun. And by fun I mean tricking and killing everyday people who are dazed by their fame and power. I guess they got all high on power and turned to murderous sadists. The protagonist is a photographer who having indulged too much into viewing the world through his lens, ends up being unable to enjoy life without it. All his life turned into taking photos of anything worth advertising to the world, to the point he gets a boner only when he views and films violence. After an accident while he tries to take a picture of the secret club, he is kissed by the maiden and escapes with her, while acquiring the power to blow up anything he photographs. After that begins a long chase with the club sending their members to retrieve the maiden and kill the intruder before the deadline for a very important project passes.The premise is very interesting and I must say I found myself captivated several times by the constant murders and decadence of money and authority. The whole series is a big metaphor around the dehumanizing effect these things have on our minds. The battles are not bad either; half the time they have a sort of choreography and strategy in them, while all the superpowers are directly related with the profession and morbid hobby of its owner, as an extension of his dark subconscious. Even without that, the main characters are all fleshed out along the way and you see how the events slowly change them. The story is not always predictable either, as midway there is a twist and the chase is over with the protagonist actually losing and the girl taken back to the club. The ending is also somewhat interesting as it is no longer some rescue mission ala shounen style but a revolution against the evil uproot of money itself. The main key events are all quite interesting.The thing is, these key events are not many and the show is a full season, mostly made up of unrelated villains who kill random nobodies and then chase around and fight the protagonist. It becomes very formulaic and can easily tire the impatient viewer or those who prefer denser plot. This off-sets by the rather high amount of violence and sexuality which keeps your interest higher than usual. There are dozens of brutal fatalities throughout the series and even a few sex scenes, elements that are uncommon to such a degree. So yeah, sex and violence end up being the main attractions as means to cover for the poor pacing and plot; but it worked for me and thus I am somewhat forgiving. This is again hindered by the production values, which are surprisingly mediocre for GONZO standards. Artwork and character figures are rather simplistic and generic, the animation is poor, even the horrible 3D effects are minimal (which is a good thing). The soundtrack is completely passable apart from the opening video. In all, the show is good for its shockers, crazy characters, and aesthetics but definitely lacks in presentation and scriptwriting. Depending on which you focus most, you will end up liking it or not. I was much younger and easier pleased when I originally watched it but it will definitely not be so patient with it today. I say it has some value and chances of rewatchability if your expectasions are not too high. To its basics the series is very good and I recommend it as a med to high anime in terms of vogue.

What started as an interesting blend of action anime and Stanley Kubrick's Eyes Wide Shut quickly derailed into an unfortunate love story between a rough-around-the-edges war photographer and a teenage girl.  With a weak story and unlikable characters, SPEED GRAPHER fails to live up to the hype created by it's trailers. SPEED GRAPHER's story of political corruption revolves around a social club for the elite that caters to sexual desires of it's overly-wealthy clientel. This tantalizing premise falls by the wayside quickly, becoming a simple mechanism for creating monsters for the protagonist, Saiga, to battle. The plot structure waivers too much between being an "obstable of the moment" style or an extended narrative type of story. The constant back-and-forth of the main characters being on the run or in capture creates less of a feeling of high tension and drama, and more a tedious repetition of "fight bad, run away, get captured again." The twenty-four episode season feels riddled with filler, and a tighter, more concise story would add greatly to any sense of impact. The romantic subplot, however, fails due to completely one-sided characters. With an antagonist blatantly copied from Final Fantasy VII's Sephiroth and a "crunchy on the outside, gooey on the inside" style protagonist, SPEED GRAPHER prefers to handle it's characteres in black and white. None of the characters are particularly likeable since them seem to only have one personality trait that defines them. Female characters especially lack in development. Kagura, the love interest and secondary protagonist, is feeble and weak and fails to grow over the course of twenty-four episodes. The rest of the good characters and the bad characters are defined by their strongest desire, which might have added to the shows commentary on corruption, had the plot actually chosen to focus on that. SPEED GRAPHER is a disappointment, especially coming out of the normally excellent GONZO studios. 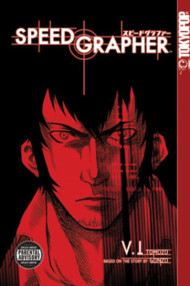