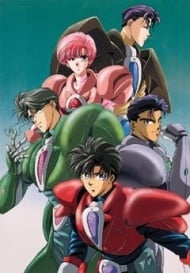 StoryI've seen quite a few parodies of the mecha/superhero type genre, including Del Power X, Ariel, and a number of others. For the most part, all of them are simply average with nothing but a handful of laughs. Shinesman, on the other hand, I found to be hilarious. Nothing of the caliber of Cromartie, Abenobashi, or other random humor type shows for sure, but definitely a notch above the usual parody show. The plot is filled with hilarious bits such as one of the planet's invaders going off about how stupid and ditzy his worthless sister is, or hilarious character quirks such as a woman who can crush anything in her hand (causing the males to back away, sweating). The heroes themselves have ridiculously funny color names (sepia? salmon pink? moss green?) and hilarious (and inappropriate) backgrounds are shown every time they come on screen. As if this wasn't enough, random lines are thrown in all the time for effect (when faced with death, the Shinesman team all ponder reasons why they need to live including one who just wants to drive his car again!). As far as what the point of the series is, it's just the Shinesman protecting the world from evil, like any superhero show! Yeah, it's no Cromartie, but the randomness and true funny factor made this a good viewing. At only two episodes, I was surprised how funny it was. Normally I watch these parody shows and am bored to tears, but this made me laugh out loud a lot of the time. The main downside is fairly substantial: it has no ending. At only two episodes, this surely was yet another OVA that didn't have enough funding or didn't sell well enough, and got the axe. Unfortunate, due to how genuinely funny it ended up being. In summary, while maybe not the funniest show out there, there are enough laugh out loud jokes and random happenings to make the story good in my book. AnimationWhile the animation wasn't bad, it wasn't anything breathtaking either. Don't get me wrong, some scenes were hilariously animated such as the scenes when the one woman crushes various objects, and the expressions on the faces of the men as they back away in a scared fashion. But for the most part, there were no spastic humor elements in the animation (chibis, deformed people, extremely outlandish and out of place scenes), and that could have helped even more with the humor level. I absolutely loved when the Shinesman gang were introduced, since they each had a hilarious background that had absolutely nothing to do with the character themselves. "Moss Green" had bouquets of roses behind him. Another had giant cartoon looking fish swimming around, and so on. The characters themselves were nothing to scream about, looking fairly normal in every way. The invaders definitely looked very fantasy-like, which was a plus, but again, nothing exceptional. The monsters were amusing. Colors ranged all over the map, though were fairly dull. An abundance of colors were used for the parody effect, as well. I will admit I laughed every time I saw the very odd colored Shinesman folks run around on screen. Overall, some very humorous aspects of the animation, but overall it wasn't anything super exciting, hence the above average (but not fantastic) score. SoundThe problem with Shinesman's music is that the majority of the time, it didn't have ANY. Not even light background music, mind you, I'm talking about absolutely nothing. The intro is great, and incredibly funny, though. The song is sung by a male, and is extremely, extremely cheesy. It truly fits this kind of parody show perfectly, and would have sounded terrible for anything else. During the second episode there was an extended fight between Greatman and the Shinesman, and at that point some background music was finally inserted. Cheesy again, and great for an action scene, but besides that, the music was almost non existant! It's unfortunate they chose to ignore this section as much as they did, since some ridiculous parody music would have been great throughout the entire OVA. Voice acting was done well. CharactersThe characters were the major upside to the OVA, but also the downside. The Shinesman crew themselves were for the most part hilarious, and had weird quirks. One guy, for example, obsessed over his car (even when faced with death). I enjoyed the woman who crushed things as well, and the invader who always complained about his sister. These particular characters helped keep an element of randomness that was refreshing. On the other hand, the OVA also had too many characters who were unrecognizable, looked the same, or in general you didn't understand them. Things happen fairly quickly and since the invaders pose as humans, it was sometimes hard to follow who was who (then again, I was paying 90% attention instead of 100%, but still). I would have liked for ALL the characters, not just a few, to have had very blatant quirks that could have helped with the humor even more, rather than blending together and being unrecognizable. OverallI found Shinesman to be hilarious. Not Cromartie hilarious, but pretty damn funny nonetheless. The randomness and wonderful parodies combined with the occasional random and funny animation made for a pleasing watch. At only 50 minutes or so, it really won't waste too much of your time, and I think you'll be pleased at how much funnier it is, compared to other supposed parodies out there. Hate the Power Rangers? This is a show for you. You'll laugh, at least a little.

StoryOur world is threatened by evil aliens with nefarious plans, and the only thing that stands in their way is the Combat Unit Shinesmanâ€”a group of five mild-manned businesspeople who don colorful metal suits and fight monsters sent out by the aliens (who are, by the way, also have day jobs disguised as human businessmen). Don’t worry, you’re not supposed to take this seriously. Shinesman is a two episode anime OVA parody of the â€˜sentai’ genre best known in the Western world for the American show â€˜Power Rangers’â€”a rather silly combination of teen â€˜Saved by the Bell’-like drama shot in the US and woefully low budget action scenes imported from Japanâ€”which tormented parents with a merchandising blitz that took American children by storm in the mid-90’s. The show spoofs pretty much every sentai cliche you can think of. For example, instead of the primary colors sometimes used in these shows to designate members, members of the Shinesman team wear oddball colors like Sepia, Gray and Salmon Pink. The invading evil aliens feature a prince who still hasn’t passed his driving test after multiple attempts and a princess that dresses like a rejected character from Sailor Moon. There is even a sentai show WITHIN the showâ€”a TV action show called â€˜Grapemen’ that the main character’s little brother is obsessed with. This sounds like a great setup for some complete chaotic hilarity, but the show itself is actually a lot more subdued. The jokes are the kind that would make you crack a smile or chuckle, not ones that would make you laugh out loud. There are a few rather funny moments, such as a Shinesman giving himself an inspirational internal monologue on how he can’t die because he has to drive his beloved car again or an alien assistant telling their prince that they should delay contacting their home world until they can get it for 10 cents a minute, but most of the show is just a slightly comedic spoof of the genre, and a lot of it, particularly the whole silly story about the main character’s obnoxiously cute little brother, felt like it would belong in a real sentai show, not a parody of it. This show could have definitely benefited from more chaos and outrageousness. I enjoyed it mostly not because it had me cracking up from the comedy but because the semi-old style animation and superbly overacted dub gave it a fun campy feel that I just found difficult to dislike. AnimationThe visuals aren’t awful, especially for an older show, but they’re definitely not OVA quality, not even for that time period. This show obviously did not have a high budget, and there is nothing in the animation to make you think otherwise. The character designs are solid but unimpressive, and the action scenes use a lot of visual shortcuts like still frames. Then again, like I mentioned above, this likely ended up making the show more enjoyable for me... Placing superb visuals with such a silly story would just seem strange, and the low budget would always remind me that the show isn’t meant to be taken seriously.SoundThe music is fine, if nothing impressive. The only thing I remember about it is the OP, which I thought was quite funny, although again, in a subdued, campy way. I watched this show dubbed, and rather enjoyed it. Older US dubs tend to completely ruin serious shows, but work rather well in over-the-top comedies such as this Golden Boy or Ranma, and this is another example. In making the various characters, good and bad, sound like average Joes, the show captures yet more of the camp factor that makes up for its general lack of hilarious comedy.CharactersYou’d hope that with less time devoted to crazy comedy you’d get a bit more time spent on making the characters memorable in a comedic sense, but unfortunately you generally don’t. The only Shinesman that came out memorable to me at all is the guy who is obsessed with his car, and he only got two or three short scenes to show that off in. Other Shinesmen show potentialâ€”the â€˜nice guy’ obsessed with his super-cute daughter and the peppy yet bitchy female member for exampleâ€”but they never develop into even a full-fledged running joke. The â€˜evil prince’ bad guy is likely the best character in the show, with his mix of arrogance and childish helplessness, and his quiet assistant who’s obviously about 10x more intelligent than him also shows promise but gets little development. The obnoxious space princess gets far too much screen time, and has little comedic value except for a somewhat chuckle-inducing driving scene and the sporadic argument with the prince. A great comedy needs memorable characters, the more the better, and this show simply doesn’t have them.OverallAs I look back on this show, I come to realize more and more that I ended up enjoying it a lot more than I probably should have. It has an unoriginal, clichÃ© story (even though that’s part of the spoof), features mostly vacuous characters and the amount of full-fledged â€˜funny’ scenes can be counted on one hand. But there’s just something about the campy animation and dub combined with the simplistic plot that you’d be likely to find in a kids’ show that made me smile. If it were any longer, it would likely start to wear on me pretty rapidly, but at only two episodes, the show runs out before it started to feel annoying, and I’d recommend it to fans of spoof comedy who don’t mind a chuckle-inducing rather than laugh-out-loud comedy who want to watch a show that’ll only take an hour to finish and won’t tax your intellect in any way, shape or form. 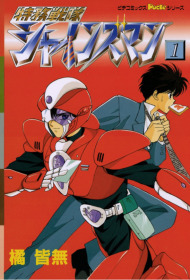