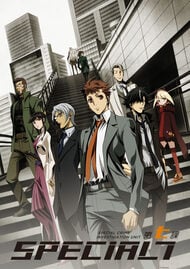 I really wanted to like this anime more than I did, it ticks many boxes of what I like, it just doesn't deliver. It initially wants to present itself as a gruesome police drama but it fails to capitalize even remotely on its vision. It's set in a intersting world with great characters but they do nothing with it. It's very (sad?) and sometimes frustrating that the creators didn't take the risk to really explore the world, characters and consequences. It would have really benefited from having been explored in a longer and/or second season. The over arching plot is entirely ok, but there is just enough to call it a plot. If they went with a buddy-cop concept instead of a try at a ensemble cast they might have had more effect. As it is now, it's a skeletonized show with a myriad of small plot holes. A few small plot holes might be tolerated in an original production, but it feels like you stumble upon them with such regularity that it is more rule than exception. This makes the plot have zero weight or effect. It feels like it goes through the motions. The body movement is adequate in the action scenes but the lack of eye animations is what really brings it down. The sounds escaped me, nothing really stood out. The supporting characters are very interesting, and if they had been fleshed out into the ensemble cast they pretend to be, and explored the world, its rules and culture it would really have brought a shine to the show. They would have stolen the show from the main character. But as it is now, all of them are stuck as concepts with occasional screen time and various levels of soulless eyes. I want to like it but the wasted potential shines through too bright.

With a title as long and tongue twister-y as that, you’d expect the show to at least try to live up to even half the gritty atmosphere it tried to advertise. I mean, that’s the least it could do, right? A title like Special 7 – Special Crime Investigation Unit is hard, frigid, and leaves no room for the imagination. A title like that, you know this is going to be all about dirty police work and the dirtier crimes they want to stamp out. A title like that is tough. It has to be, if it refuses to be content with investigating random street crimes. No, a title like that, one that feels the need to say the word ‘Special’ twice, you know you’re in for something – what’s the word for it – special. And it almost hits the mark, you know, but only in the most technical and loosest sense of the word. See, despite its Law and Order-esque title, Special 7 – Special Crime Investigation Unit is anything but normal, but that’s really only because this is an urban fantasy, where our hardy cops must often deal with supernatural elements to carry out their own brand of justice. Of course, this also means some of the cops are supernatural elements themselves, but it’s a detail that’s largely irrelevant unless the plot calls for it. The plot, which, to its credit, is also fairly supernatural on its own. But by that, I only mean it's supernatural enough, so that the initial mysteries wouldn't work if they weren't at least a little otherworldly in nature. But it’s all mere cosmetic trappings, my dear Watson, and so, in spite of the dragons, elves, vampires, werewolves, and other magical whatnots, Special 7 – Special Crime Investigation Unit is still bored, lifeless, and is the thing that happens when a show airing a year before the new decade stops trying. There’s phoned-in and then there’s this, where nobody cares about its basic conspiracy plot, not even the generic characters who seem almost sorry they’re involved in this at all. A small silver lining, if you’re into that sort of thing: Kenjirou Tsuda voices one of the main characters, and getting to hear his smooth, suave, sexy dad voice almost all the time is a soothing balm to the complete, utter boredom this show induces. There’s a reason his character’s stupid nickname is Charisma, and Kenjirou Tsuda is it. There are also reasons behind everyone else’s enigmatic code names, like Analyzer, Rookie, Sniper, Boss, Samurai, and Ninja, but it shouldn’t be too hard to figure out what they are. So now, its bland, straight to the point title makes some sort of sense – if even the team behind this couldn’t be arsed to think of something more creative to reel the viewers in, then that should tell you most of what you need to know about the actual show. They could have went ahead and called this Kenjirou Tsuda and Friends while retaining the plot, and I guarantee you wouldn't even be able to tell the difference.

To be honest I don't know why this anime has such a low rating, personally I thought it was quite charming. This is a good example of don't write it off as bad for it's rating because you might take a liking to it (like I did ;3). etherway I think this is a nice watch (✿╹◡╹) 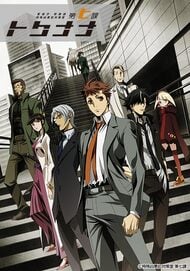 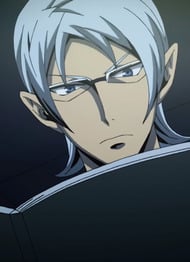