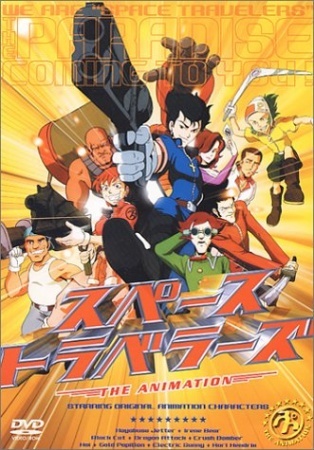 In the year S.A. 038, the ORS (the Orbital Ring System) invaded and conquered the world as we know it. These unknown assailants crippled the Earth, destroyed the United Cosmic Fleet of planets, and cut off the colonies from the home planet, all in only three days! The only people brave enough to bypass the ORS' security are those who act as mercenaries, traveling between the Earth and colonies with information and goods -- for a profit, of course! For Jet and his crew, their most important mission is suddenly at hand -- but can they survive long enough to save the day?

StorySince there is virtually no plot in Space Travelers, I thought I'd write a haiku instead: Space fights and action Robots appear, oh shit! Run! Shoot them in spaceships Oh man, I kick ass at the haikus. (ha!!). Yes folks, that's about how much inspiration I got from Space Travelers. Let's just say the entire point of the movie was to be a campy sci-fi viewing, sort of like Star Wars, but way worse. It's unfortunate because in the beginning of the movie, we actually think it might not be half bad. Alien invaders came and conquered the Earth in three days, put a giant ring system around it, and cut off all contact between mankind and the outer colonies. Sounds cool, right? Unfortunately, we then are shown various action scenes with robots and spaceships, and almost nothing else of substance. If you are looking for anything with even a remote amount of plot, don't look here for god's sake. AnimationThe visuals were just about the only thing going for Space Travelers, but they also were fairly mixed as far as consistency of quality. The vibrant colors were a definite plus, and everything in general seemed very lively and well done. Space scenes and the ships were gorgeous, and action scenes and such were fluid. My problem with the animation was with the over simplistic shading and attention to detail (there really was none). Most of the character designs were extremely simple, sometimes (in Jet's case, for example) looking almost... wrong. I'm not sure how to put my finger on it, but sometimes the characters had weird features that made them look not-so-human. This overall simplicity combined with the beautiful colors made for an unusual watch to say the least. In general, all of the ship designs, robot designs, and overall everything designs seemed very generic and could have been ripped off from many other series. That's sort of the ongoing theme with Space Travelers though -- generic space action movie. While the animation and colors were mostly pleasing, they still weren't anything special. SoundWhen the music first started playing, I thought I was watching Galaxy Quest. That, or something else designed to sound purposefully cheesy and very sci-fi/space-like. Though (like the rest of the movie) very generic, the music definitely was well placed with the tone the movie tried to portray. The entire goal of the movie was to be a campy sci-fi flick, and the music matched that to a T. Brass instruments and overall orchestral tunes were blared loudly whenever anything was happening, especially since the majority was action scenes. Voice acting seemed fine. CharactersThe only reason I gave the characters section a score higher than a 1 was for the trigger-happy female, just because she was amusing for the 2 seconds she was on screen. There were quite a few characters, most of which were introduced in an amusing way at the beginning of the movie. Unfortunately, we know absolutely zero about any of them except what they look like, so there is zero development, not to mention they don't even have their little quirks that define them in a shallow fashion. There are one or two exceptions to that rule, but for the most part, it was the case. All we know is there are a bunch of these mercenary types going on a new job, lots of action scenes occur, and then it ends. Do we care about the characters? No. Do we even remember the characters? Probably not, unless you have a photographic memory. Totally useless all the way around, really. Even the robots and bad guys seem ripped out of 75 different sci fi sources. OverallIt actually took me two viewings of this to end up adding it to the database, for good reason. Both times I was so incredibly bored (and it's only a 58 minute movie, mind you) that it's like my brain forcefully made me forget anything about it, immediately after hitting "stop". There is literally nothing inspiring about Space Travelers except the decent animation and fitting music. If you are in a campy sci-fi mood, by all means, you might enjoy this for a one-time viewing. Otherwise, I see no reason to touch this at all.