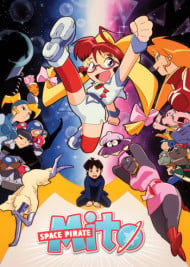 She’s feisty, strong, is stuck in the body of a child, and is wanted in fifteen star systems for crimes against the Galactic Empire – she’s Space Pirate Mito! Alongside her trusty crew of creatures and cyborgs, Mito is constantly on the run from members of the Galactic Patrol and evildoers who want their hands on the most powerful weapon in the world; but now she has her sights set on something far more valuable: her son. Aoi Mitsukuni is a young teenager who has grown up without his mother – but little did he know that she’s none other than Mito, and even worse, the woman he remembers is the cyborg suit that Mito must inhabit to look like a normal adult! Aoi must now cope with his new family life, dodge the clutches of two Galactic Patrol operatives (one of which he finds himself falling in love with), and discover the secrets of his mother and the universe...

950 users are tracking this. Log in to see stats.

This anime is basically about the animators getting stoned and making a show as wacky as possible. Everything in it is excused to be as such (thus it makes sense) and at the same time there are so many things happening in a chaotic manner that it feels random (thus it doesn’t make sense). To put it in other words, they had good ideas but went easy on the whole thing and focused more on craziness rather than character appeal or good storytelling. The story is about Mito, a female space pirate captain, heading to Earth with her spaceship in order to see her son as well as salvaging a doomsday device and the heir of the galactic empire. She is pursued by space police officers, hired by a villain going after the aforementioned objectives for evil purposes. Her son happens to be without knowing it a half-breed, as his father was human. He also has the key to the weapon on him and is close to the heir. The story becomes more twisted by the fact Mito’s race all look like kids even after they become adults, and they hide their real shapes with adult-looking human dolls, and their gender is fluctuating until adulthood, and there is a mystery around who is the heir, who is a spy, who is the villain, and lots of other weird stuff.It all sounds very interesting on paper yet the presentation is almost entirely situational comedy. Despite the show being named after the female pirate, all the plot centers around her son, who is the typical spineless indecisive dork that everybody loves for being such a useless idiot. You could even say it is a sort of a harem parody, since most chicks are all over him when he just wants a normal life, yet ends up living with a little girl who is his mother and being forced to date a girl who is a space police agent and wants to kill him. Despite the wacky storyline, the show is not episodic to the most part. It does fool around a lot yet each episode offers some sort of development or progress, no matter how simplistic or superficial it may seem to be. You actually see the characters being fleshed out and even changing along the way. Yet because of the humorous nature and the chaotic way everything happens, you probably won’t feel a connection to them. They all act very childishly and make newb mistakes even when they are supposed to be professionals; thus all attempts at drama and tension are lost because of not taking things seriously. For example, it is very hard to feel sorry for Mito when she looks like an elementary kid with glasses and a big ribbon. You also wonder what kind of pervert her husband was or why should you care when she acts so irresponsibly around really important matters. The need to have an action scene in each episode also ends up working against your enjoyment, since it feels unneeded and not that exciting to care. The production values are, like the story, both good and bad at the same time. They are very poor and you see lots of lazy drawings, bad animation, easy-going voice acting, and silly songs. Simultaneously to that, you see a lot of attention being given to basic plot progression, character analysis, even nicely done battle choreographies. The animators definitely poured a lot of good ideas in the show and just lacked the passion and the money to make them look and sound good. It makes the whole show hard to appreciate for its merits. It is definitely not a masterpiece and hardly has any replay value, yet it deserves some attention just for the fact it is not exactly a dull mediocre show. It has a lot of wacky ideas and comical situations that are presented in a very easy-going way. There is also a finale that feels solid and not crappy or open as such shows usually result too. Recommended only if you have run out of comedies and feel like watching something weird.

Space Pirate Mito (aka Stellar Buster Mito) is a late 90s sci-fi action anime. Admittedly it's mostly geared towards a younger audience, featuring many simple characters and concentrating on people chasing each other around, having been designed in bright colours and seldom letting off the high tempo of its narration.But it's a bit more than that. The main character, a three-foot female space pirate by the name of Mito, does roam around space, being supported by her motley crew of strange people and other aliens. Mito is being chased and shot at by two officers of the Galactic Patrol, whose boss Ranban has all the appearance of a cousin of Darth Vader. Those two officers, the young siblings Mutsuki and Masatsuki, does an extremely poor job in catching the midget space pirate, despite the fact that one of them has a "Kaizou-kun", a device which lets him transform any machinery into a combat mecha robot. Mito, however, mostly fights being dressed in her "mail suit", a fighting overall that closely resembles the body of a typical American star model or movie star.Mito has a son, Aoi. This 15-year old has for the last 15 years "known" his mother as an star model being off and busy in America. He seldom sees her – what he thinks is her. On the few occasions they actually meet, she always takes care to dress in her mail suit. Mito doesn't want her son to know his mother is a space criminal and wanted in several star systems. But at the same time, what she really want is for someone to call her "Mother".Through accident, one of her flights away from the Galactic Patrol takes Mito to Earth. And through another accident, she happens to exit her capsized mail suit just in time to be spotted in doing so by her baffled son. So in the end, the truth must come out.The above resumé is only from episode 1 of 26 (when both seasons are added together). But it is a fairly good example of this anime, as this is a pretty strange mix of Cartoon Network fare (bright colors and funny action) and a series that deals a lot with identity issues. Some other examples: Mito's mother has been reborn as a flying ceiling lamp, at least one of Mito's pirate lieutenants has a clearly androgynous character, and the main storyline of the second season of the series (episodes 14–26) deals with the fact that Aoi has had a sex change – coupled with the fact that she/he then falls in love with one of the galactic patrol siblings (Mutsuki, the female one). Perhaps that's not your typical Cartoon Network stuff.The downside to all this is a lack of congruity. As the main premise of "Space Pirate Mito" is a fun, brightly coloured action series with fairly typecast characters, those family problems and gender issues have a hard time being convincing in their own right. There's just too much other stuff going on, and the series doesn't look like a realistic drama series. So many of those traits fall flat. But for a viewer that can easily digest serious drama inside a "Flintstone" façade, this may well be a series for you.Another series that, arguably a bit more successfully, mixes cartoon action with serious drama is "Strange Dawn". 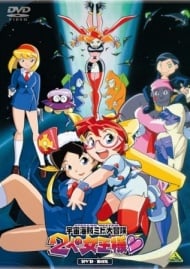 Aoi and Mutsuki: A Pair of Queens 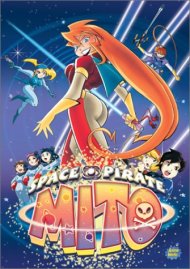