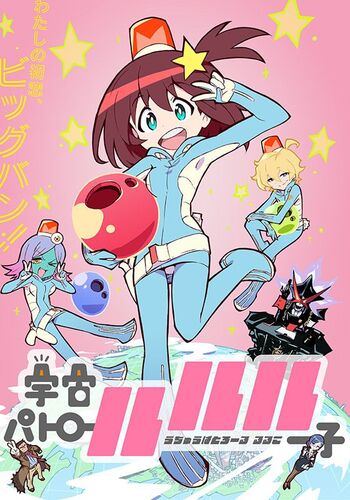 This is another anime that was recommended by my Secret Santa, cosmia, so thank you to them for sending this my way.

I find it a bit difficult to talk about this anime. Not because it’s super complex or deep, but for the opposite reasons. Space Patrol Luluco is in a weird place; it’s not really a “guilty pleasure” anime, but it’s not something as profound as something like Steins;Gate or Erased, either. It’s kinda like a diet soda, if that makes any sense.

The plot is an odd one, much like other aspects of this show. Luluco, a middle school girl, lives in Ogikuba, a city in Japan that is inhabited by humans and aliens alike, with her father who is a respected member of the Space Patrol, a kind of police force that operates across the galaxy. Luluco wishes to live as normal a life as possible with the totally abnormal world around her, but one morning her father accidentally swallows a pill from his work that instantly freezes him. Luluco heads to her father’s place of work and informs the chief, Over Justice, who tells her that she must fill in for him until he unthaws.

Some other bizarre events take place that result in the main characters leaving Earth and traveling through space, even coming across settings from other IPs produced by Studio Trigger like Kill la Kill and Little Witch Academia, which I found to be pretty entertaining. There’s also a subplot involving Luluco falling in love with her coworker Alpha Omega Nova, another middle schooler who happens to transfer to her school just after she joins the Space Patrol. All of these were pretty cute and “bite-sized” with each episode being 8 minutes in length with 13 episodes total, but I often found myself grinning and laughing at the goofy scenarios.

The animation is really great. Leave it to Studio Trigger to produce a show with not only great animation, but also animation that is difficult to confuse with other shows. Animation shouldn’t really make or break your experience with an anime, but in this show’s case, I really can’t imagine a different art style. With the simple characters and plot and the shortened episode length, the chibi designs suit Luluco and her friends well.

Sound design is tolerable; really, the voice acting is what stands out in this category. I know some people may be turned off by many of the characters shouting all the time, but with a show like this, I feel like it only makes sense for middle schoolers traveling through space and morphing into guns to be a bit louder than most.

In all honesty, the characters aren’t exactly unique, but again, they fit well into the environment presented to them and get the job done. Luluco is your typical goody two-shoes, Midori is your standard “bad girl”, Luluco’s father is passionate about his work and his daughter, and Over Justice just wants to serve justice where it’s needed. Luluco and Over Justice are the two worthwhile characters from this show because you’d never expect a cloaked skeleton with a flaming skull to be in a show like this and Luluco (as mentioned by other characters) is just a naïve, lovestruck middle schooler.

Space Patrol Luluco could easily be considered a niche anime, as it does some wild things, but mostly in moderation; when you boil it down, it’s a superficial slice of life with elements of sci-fi and police stuff. If you’re just starting out with anime or you’ve been with the medium for a long time, it may be difficult to appreciate it to its fullest extent. However, if this sounds interesting to you or you’re just looking for something new, I wouldn’t be against giving this one a try.

This is a bizarre kalidescope of rainbow mess. Normally, I love that sort of thing. However with this one, I was left overloaded and like I had just watched a bad Cartoon Network cartoon. The story and action were all over the place and way to jumpy. Even though the episodes are only 7 minutes long, I couldn’t handle them being any longer. Upon finishing the series though, the story comes together with a message.

This is my first anime review.  It's not indepth or anything but here we go...please note that there may be some spoilers in this so if you never watched it then please don't read on...you've been warned!

Space Patrol Luluco was an anime I tried on a whim.  I thought I would likely end up dropping it, but here I am reviewing it after having watched it all.  It starts off like your typical slice of life anime but quickly gets strange and actually interesting.  Right after Luluco ends up joining the Space Patrol and with the first Justice Gun Morphing sequence I was laughing and enthralled by it all.  It's made up of thirteen 7.5-8 minute episodes and despite the short length of each episode, they get quite a bit in.

The base story involves Luluco, a middle school girl who simply wants a normal life.  Of course her normal life has her living in the only space colonization zone on Earth in Ogikubo and the school she goes to is mostly made up of aliens.  Her dad is a Space Patrol officer in the Earth branch.  But right from the get-go, her normal life is made totally abnormal by having her forced to join the Space Patrol after her dad was frozen.

The animation style is fairly simplistic overall but it's quite effective.  Animation seems pretty smooth.  The one thing that seemed weird was when the skeleton guy was eating the food would just suddenly disappear.  But I think that was supposed to happen.

Can't say I was overly enamoured with the opening, but the tune is catchy.  I liked the ending better but it still wasn't a favourite or anything.  Just not to my tastes.

The characters are great.  Luluco reminds me of a sane Mako from Kill la Kill.  Her dad also reminds me of Mako's dad.  You've got the rather emotionless Alpha Omega Nova (there's reasons for that though), then there's her classmade Midori and my favorite Over Justice, the skeleton alien chief of the local Space Patrol branch.  And then there's her mother...who is quite a bit different from Luluco.  Even the minor characters are great, lots of personality in them.

As I said before, I really doubted that I would like this show.  Even after the first couple of episodes I was unsure because it was...well, a bit strange.  But I was sold on it soon after and really enjoyed each short, but action packed episode.  I especially enjoyed the humour.  If you want to give it a try, it's not like the episodes are very long and I think it's worth giving it a shot.  You never know, you might be pleasantly surprised like me!

OKAY gotta say this, this anime is really GREAT, LOVING AND OVERFRIENDLY!! I cried in the last 2 eps but really only if it had another season, wait tere must be! In last ep, Luluco was going to meet Nova and said "To be continued" ?! What the heck? There must be a season 2 , yeah. I'm seeing forward to it (anytimme if it will come) :) I want all Wish upon the Pleiades and light-love anime fans to watch this one, pretty amusing and friendly <3