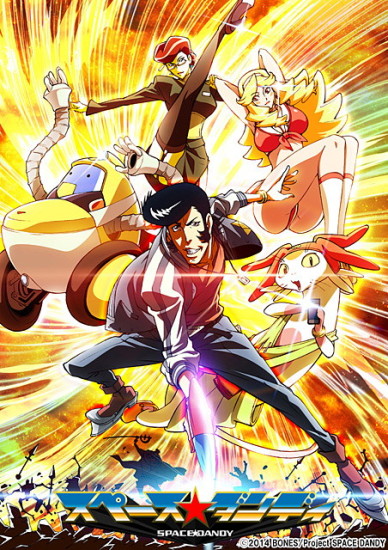 I can't explain how much fun this series was to watch. Sometimes it's not about story, but about the experience you get from it. The stories were pretty refreshing usually, the characters were fun, the animation was very fun to watch. I don't have too much to say, just watch it and find out.
ALSO! DO NOT FORGET TO WATCH IT IN DUB! The dub is great and the jokes just hit better.

I had watched several Space Dandy episodes already and so far, there is little but complex plots in the episodes and no plot at all to move the series along. We had the first season, where Dandy talked about body parts when he sees women and there was an annoying woman who comes from a restaurant with its name taken from a private part. At first, I thought the series was extremely cool but as it gets further, you'll realize that Dandy is a pervert which makes us realize how disappointing he actually is.

Then, when I heard that there was going to be a 2nd season arguably titled "Space Dandy 2" or "Space Dandy 2nd Season", I didn't really like the ideas of giving them a new title, it REALLY should've been one big show with whatever combined episodes.

Pretty much each episode that I've seen have different writers and this was a bad thing if they're not careful enough to keep the show's brilliance.

After looking at more episodes of this show, I thought that it was made to be a related anime or even a follow-up to Bebop because almost everything about it (despite some parts of Space Dandy) reminded me very much of Bebop and I also was disappointed yet satisfied. The thing is, the show tried too hard to be overly unique to Bebop like Dandy's perverted personality, him kissing Scarlett and last night's episode where Dandy was looking at fireworks and an annoying little girl with the generic and annoying anime voice for little girls which made me go "Wow...". Not to mention that the theme song looked childish with techno music that gives you a weird feeling about it. Indeed the music is less memorable than Cowboy Bebop's and so does this show.

The art and animation was excellent for the most part but in some parts of the show, they feel off compared to how they were intended for the series.

I found out that this show was directed by the same person that directed Bebop and I was like "How did he go downhill?" Because I've seen a lot of shows from him I never seen one that I thought was just as disappointing to some extent. Shows like this need to capture the same feel of Bebop.