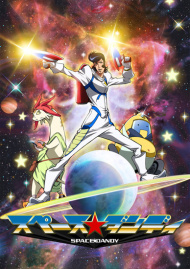 Space Dandy is a dandy in space! This dreamy adventurer with a to-die-for pompadour travels across the galaxy in search of aliens no one has ever laid eyes on. Each new species he discovers earns him a hefty reward, but this dandy has to be quick on his feet because it’s first come—first served!

Are you ready for interstellar laughs and nonsense? Space Dandy's got you covered. I have not seen Cowboy Bebop (as I'm writing this), only an episode or two, but even I can tell that Space Dandy --as well as any other action-packed and wacky space anime--have an obligation (well not obligation, but a gesture I guess) to nod towards a series that helped propel this niche genre into the limelight as it did. Enough of that crap, let's get down to why I love Space Dandy. STORY: Space Dandy is a pompadour-wearing shameless pervert, much like Johnny Bravo on Cartoon Network days of yore, who loves hunting down new species of aliens almost as much as he loves curvy ladies. Along with the gadget-loving, furry" freeloader" Meow and the seemingly only sane entity on the ship QT the three travel the galaxy in their space ship called "Aloha Oe" to discover new aliens to register for money.There is also a gorilla with his little scientist sidekick that looks like an estranged cousin of Beaker's from the Muppets, and they're almost head-shakingly incompetent in trying to catch Space Dandy for..some reason or another. It's not made abundantly clear, at least from my point of view. Did I mention that Dandy's favorite bar is called Boobies? Yeah, immature but still funny. Each episode is a stand-alone like a Western cartoon, and an episode that continues off from the previous one is the exception rather than the rule, but on a rare chance previous episodes may be referenced in a passing comment by one of the Aloha Oe's crew members. CHARACTERS:  Space Dandy is charismatic and while a bit overly focused on the babes is an individual that I couldn't help but be charmed by. He is earnest, enthusiastic, and while a bit mischievous and conniving in trying to lure girls pretty much plays his hand for everyone to see. You know he likes boobs and butts, there really aren't any smoke and mirrors to hide that. But while he becomes disappointed after being rejected, he bounces back and tries to find another target. Yes I know that sounds predatory but he's genuinely harmless. a bit touchy-feely, but harmless. Another thing, the ladies that he hits on in this universe can take care of themselves or are secretly in-tune with his motives and act accordingly, or Dandy just has terrible timing (Ha!). The aliens they run into are usually "monster-of-the-week" but present themselves as unique entities with their own motives and sometimes backstories. Just enough detail to make the viewer say "Okay, this one is definitely different from that one" without it seeming like a Wiki entry. ANIMATION: Space Dandy comes from BONES, and while I haven't seen a lot of their works, I can tell you that the glossy, "fresh" look is something I recognize from their work on Fullmetal Alchemist: Brotherhood. The colors in Space Dandy pop, especially with the opening themes and whenever Space Dandy goes into overly-dramatic monologues (read: rants) about something that strikes him, manly tears and all. The colors shift to a very limited color palette like black and purple or red, or go "red light district" with everything bathed in one hue. The aliens all come in different shapes and sizes with surprising creativity. During fight scenes the animation becomes a bit short-handed and more sketchy to help along the fast movements, but it quickly reverts back to the distinct style once things slow down. VOICE: I don't watch the Japanese sub, so I can't say anything about the seiyuu, but Patrick Seitz's charming tenor is perfect for Space Dandy. In English the jokes and nonsense and wordplays are picked up by me automatically (speaking English and all) which for shows that are fast paced with the cracks and snark is a must. While I find Alex Tipton's voice actually a bit...annoying in other works, her role as the always-bubbly, cheerful Honey at Boobies is done well. Oh, and people who voice robots are auto-tuuuuuuuuned. That's a win in my book. IN CONCLUSION: I can't really say anything else other than this show is ridiculous and hilarious. It takes the funniest situations that could happen in space and makes a show all about that with little repercussions down the line in terms of the story, which leaves the slate clean after each episode and me wondering what new accident or idiotic mistake may trigger next. You may see this as a dramatic, colorful, senseless rip-off of CowBoy Bebop or other serious "space shows" but I think this is a series that could be a fun title to help a person curious about anime to slide into, much like Cowboy Bebop or FLCL during their initial runs on Adult Swim. Give it a chance for the humor and the colors.

Space Dandy seems to have its reputation tainted by Cowboy Bebop - simply everyone who watches this show should stop and realize that this is not Cowboy Bebop and should not be treated as such comparison. The two share a similar themes in being about space, about cowboys, and about a group of random people hunting aliens/people, and... oh wait, it is sounding like Cowboy Bebop. At most, this show can be taken for a comical parallel of Cowboy Bebop, for those who have taken into account that the setting is almost identically the same besides the plot (there are its major differences); however, I believe this is a large mistake on the studio's part in lack of anticipation for the audiences reactions. Getting into the show... What Plot? The show is ultimitely episodic. Several times the show appears to end, but only to find the next episode acts like absolutely nothing happened. The first episode ends with the entire crew dying (spoiler alert!) but telling you such a thing is irrelevant as the show coninues on. This is a major chopping block to any amount of meaningful overarching story to take place. The best feeling this show can get is a sitcom: watch an episode then completely forget about it because what happened in that episode doesn't mean jack sh*t in the others. To say that this show does not flesh out its characters through plot devices would be a lie, there were a couple of episodes which highlighted each of the two minor characters (Mr. Dandy will probably wait until Season 2 for his backstory). Thats the only pat on the back I can give Space Dandy, the rest of the show glimmered nothing. Comedy was elementary in a sort of slapstick and immature manner. Inherintely there is nothing wrong with that - the first episode gave me a quick laugh with its own version of Hooters - but there is something wrong with not coming up with new humor. The same jokes, punchlines, and dialogue were stretched acrossed 13 episodes, and soon enough the foil among the three loser protagonists became nothing more than watching some losers do their thing. Loser protagonists can be done right too, just watch Kaiji and you will immediately understand why he is one of my favorite characters, but without any sort of real feeling of tension in the story or development of characters, such characters will fall hard. So the characters aren't even unique? Nope. Since the characters learn nothing from previous shows, they act the same way for 13 solid episodes. That wouldn't be bad if they weren't predictable. Dandy says something sexual, Meow says something stupid, and QT complains about how he can't  upgrade his software. I couldn't even try and laugh that much if I wanted.  The most interesting episodes were the ones which focused on developing the characters background or perhaps personality - Let's not forget that any new attitudes gained were immediately forgotten. This show sounds terrible, why not just score it 1/10? I found the show intriguing, creative, and artistically pleasing. The jazzy music gave a change of pace to what you normally hear, and it wasn't oddly placed - not groundbreaking or phenomenal, but pleasing to the least. Artwork changed somewhat dramatically on occasion, like that you would see in Gurren Lagann during certian fight scenes. Creativity expressed itself through some the outlandish scenarios that the space crew met, in which the alien planets were more interesting in and of itself more than the crew at times. All of this was the greatest potential to the show - experimenting with (somewhat) unique art design, exploring odd frontiers in space, and simply disregarding logic in an easy going fashion. To the show's demise, we explore these places with really, really, really not so exciting people who aren't that funny. Even if you want to go on vacation and sight see wondrous landmarks and museums, bringing people who don't belong ruin the trip.

Space Dandy is absurdist comedy, pure and simple.  It sometimes pokes at anime tropes, and relishes in them at least that often.  It has no lofty ambitions, and no desire to be anything important.  It's just a good time. Story: NA/10 There's really no story to talk about.  It is indeed completely episodic, which is a perfectly fine, time-tested way to do an anime.  If that's not your thing, fine, but that's not a fault of the show. Animation: 9/10 I'm not a connossieur here.  It was pretty.  The aliens/monsters that show up are creative and sometimes unsettling.  I enjoyed it. Sound: 8/10 I watched the English Dub, I can't speak to the original VAs. I enjoyed the OP, though it isn't something I'll listen to on my own.  Dandy's voice is spot on, and I enjoy QT's auto-tune/GLaDOS thing.  The Narrator's understated voice may have been the best part of the show for me.  Meow's voice was maybe a little grating at times.  I don't even remember the ED. Characters: 7/10 The characters are who they are in episode 1, and that's all they'll ever be.  But if you came to Space Dandy for character development, you're in the wrong room.  Dandy's a wannabe womanizer, QT is his long-suffering robot sidekick, Meow is an otaku and not quite a cat.  The Narrator wants to be doing literally anything else.  Dr. Gel is an ineffectual gorilla in a top hat and he answers to a flaming skull for some reason.  Think the Cobra Commander, but with a much less annoying voice. Sensibility of Cowboy Bebop comparisons: 3/10 Why is this everywhere?  Yes, it's Watanabe, and yes it's a hungry, bounty hunting space crew.  But if you can't tell that Space Dandy has absolutely zero aspirations of being Cowboy Bebop by the time the pre-OP intro is over, I'm a little worried about how you manage to get your pants on in the morning. Overall: 9/10 He's a Dandy guy.  In Space.  If you haven't laughed at the end of Episode 1, just move on.  It's not for you and that's fine.  The show never takes itself seriously, at least not in this season.  It won't ever make you think about your life, and it never planned to be up for any awards.  Shut your brain off, watch the idiot fail for 22 minutes, and find out whether the entire crew will pointlessly die in this episode.  Enjoy the ride, baby. 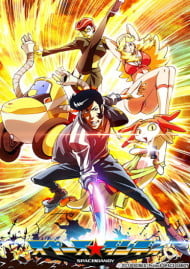 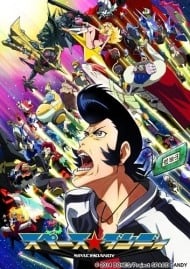 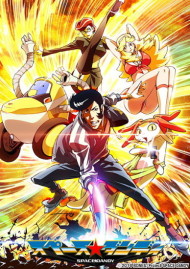 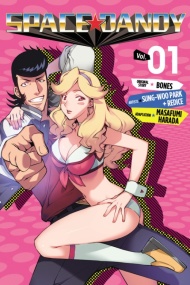 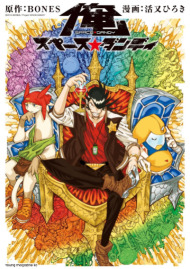 I Am Space Dandy