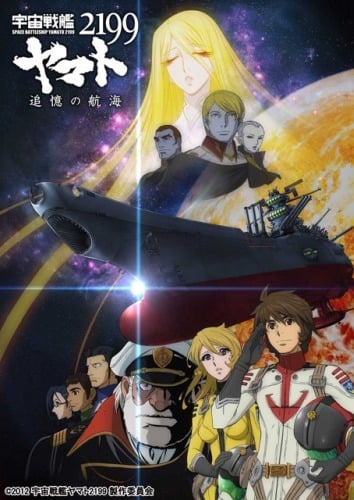 If you're looking for anime similar to Space Battleship Yamato 2199: Tsuioku no Koukai, you might like these titles.

Legend of the Galactic Heroes: Die Neue These 2

These short stories fill in the background of Yang Wenli prior to the Overture to a New War movie, and continue with the background of Reinhard and Kircheis where Gaiden 1 left off. In these stories, Yang becomes the Hero of El Facile and is given a research investigation of some delicacy, Reinhard's first assignment to a ship at Iserlohn, Reinhard deals with a formal duel among the politics of the nobles, Reinhard's secret mission into Free Planet territory, and the Third Tiamat Battle, wherein Reinhard earns the rank of General at the age of 19.

Three years have passed since the Four Nations Alliance declared war on the Abh Empire. With both sides decimated by the first encounter, the lull in violence has provided enough time to build fleets massive enough to span the entire galaxy. Just before the Abh complete preparations for their conquest, however, the Alliance launches a pre-emptive strike, forcing them to take the defensive. Now in command of her own ship, Lafiel is assigned to the fleet as a destroyer captain, and eagerly awaits the opportunity to prove herself as a true Abriel. But when a new class of enemy ship appears on the front lines, the tides quickly turn for the worse. With her vessel now little more than cannon fodder, her dreams are turned into a desperate race for survival - can she and her crew survive amidst a battlefield of endless death and destruction?

The war between the monarchical Galactic Empire and the democratic Free Planets Alliance has raged ceaselessly across the galaxy for over a century, with the fleets of both powers having fought countless battles. Currently the conflict revolves around the strategic Iserlohn Corridor, one of only two passages of space through which the two forces can access each other. Here the Empire has built the nigh-impregnable Iserlohn Fortress, whose deadly weaponry has thwarted repeated efforts by the Alliance to capture her. Phezzan, a neutral mercantile state, controls the other corridor. The long war has resulted in an indecisive stalemate, but there are two men from the two worlds who will change everything: Wen-Li Yang, a gifted strategist from the Alliance who wants nothing more than to retire and be a historian; and Reinhard von Lohengramm, a man from the Empire whose ambition knows no bounds. Their loves, struggles, triumphs and failures play across an interstellar stage of intrigue, war and death.