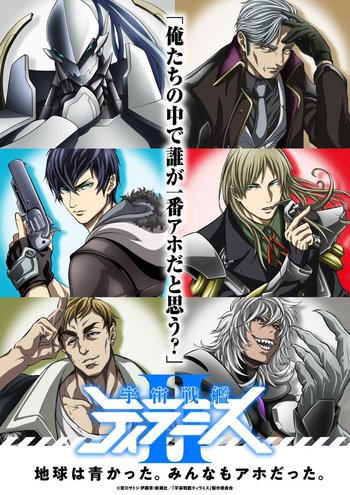 Following a global war and climate change, 35% of Earth's land mass has sunk into the ocean. In this difficult time, countries rely not on armies but on private military corporations to provide security against constant terrorist attacks. One such company is Arqon Global Security, whose staff of mercenaries is tasked with protecting Daiva City on a pay-per-mission basis. Armed with motorcycles that transforms into weapon-wielding mecha, these "blademen" are none too popular with the people they protect - but they always get the job done!

A showcase of Macross variable fighters in action, from the VF-1 Valkyrie to the YF-19 and YF-21 - as animated in 3D by Gonzo.

Ranka's star career flourishes while Sheryl's health rapidly deteriorates after collapsing during a live performance. At the same time, separate factions are maneuvering behind the scenes seeking to control the Vajra horde by utilizing the singing abilities of the two songstresses. As the entire Macross Frontier fleet begins to wage the final war on the Vajra, Alto finally makes a choice between Ranka and Sheryl.

A ship crewed by earthlings crashes on Chronos. Believing themselves stranded, the crew volunteers to fight along the Machine Robos.