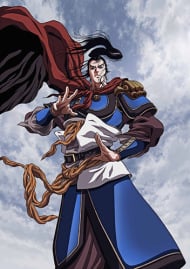 The Han Dynasty, which has ruled China for many generations, has become corrupt and oppressive - while the people starve and fall to illness, the Imperial nobles uncaringly live in luxury. One fateful day, Cao Cao, the sixteen-year-old son of a nobleman and leader of a troop of bandits, learns just what it is to suffer when the woman he loves is sold as a concubine to the devious Imperial Attendant, Zhang Rang. Their innocent romance destroyed, Cao Cao turns his efforts to becoming ruler of the world and thus restoring the true justice of Heaven to all people. But the journey to claiming ultimate power is long and fraught with great peril, and at every corner his unscrupulous enemies plot his downfall...

Okay so at first glance this looks like your typical retelling of the events of the Three Kingdoms period, but one thing really makes it stand out--it follows Cao Cao as the protagonist rather than the antagonist like most interpretations of the time period seem to, making for a really interesting new take on the story. Now, fair warning before you watch, this show is MANIME through and through. This is like, the second manliest anime I have ever watched. So if you cannot handle all of the FACE-MELTING MANLINESS, turn around and walk the other way. Also it's really bloody and violent and stuff, so if you're not into that stuff, then be warned, it's there. Oh, is it there.STORY: The story is fairly straightforward. It follows Cao Cao's military campaigns during the Three Kingdoms period. The way the narrator is used throughout the story makes it feel almost like an over the top parody of a historical documentary. The tone is super serious though. It also has a bit of a problem with female characters and objectifies pretty much any women that actually show up, which is kind of discouraging. There are barely any women in the show though, so at least it's not shoving it in your face 24/7. It's put together fairly well, though sometimes it does some really abrupt timeskips. I mean, I get that this is a necessary thing when you want to make an anime that spans as many years as this one does, but sometimes it feels like they could have picked better times to do it. Aside from that though, it's really good. Until the ending, that is. The ending is really abrupt and kind of dissatisfying. It feels a lot like you've just watched half of a story and the second half is just...missing. I hear the manga doesn't have this problem.ANIMATION: The animation fits the tone of the series pretty well. Overall the production qualities are high and the style the characters are drawn in is visually very interesting. It's a very pretty show, once you get over all the blood. Honestly, the only beef I have with the animation is that often some of the big movers and shakers are portrayed figuratively as dragons, and the anime takes this to the max and actually animates like LITERAL dragons coming out of them and flying around. With the way they implemented it, it could have been a really awesome stylistic choice, if it werent for the fact that the dragons were done in really cheesy CGI that clashes a LOT with the style of everything else. SOUND: 1. MUSICThe music is freaking EPIC. It starts out with the unbelievably awesome HARDCORE METAL OPENING, and gets better from there. Both the opening and ending theme songs are good, but what I really love is some of the background music. It fits so well with the rest of the show, and it really gets your blood pumping while managing to be really pretty at times too. 2. VOICESThe voice acting is really nice. It can get over the top at times but that really fits with the larger than life way the show often presents itself. There was a pretty wide variety of voice acting styles. Mamoru Miyano plays the role of Cao Cao straight and doesn't get into the theatrics the others do as often, but he really gets Cao Cao's frightening magnetism right on the mark. On the other hand we have Rikiya Koyama totally chewing the scenery as Lu Bu. But I mean, come on, it's LU BU, it would be  disappointing if his presence WASN'T ten times larger than anyone else in the scene.  Though my personal favorite performance was Tomokazu Seki as Liu Bei. He was right on the money with that role. Once more I have been impressed with his ability to make a character really come alive, and to strike that perfect balance between serious and light hearted, which seems like it would be expecially hard to pull off in a show with a tone like this.CHARACTERS:  Well, first off, the cast is almost entirely male. The main cast IS entirely male. This doesnt bother me as much as I thought it would. Everyone is badass and a lot of them are pretty compelling. I mean, I can't really say much because I mean it's not like they're exclusive to this show. They're all historical figures. Though I have to say for a lot of them its one of my favorite portrayals of them.CONCLUSION:So anyway, even though Souten Kouro has a few glaring issues, it's still overall a really good anime and if you're into the whole manime thing I would totally recommend it. And for any Romance of the Three Kingdoms fans out there, this is a MUST WATCH. I cannot say that enough. Absolute must watch. Yes.  And if you don't fall into either of these groups, Souten Kouro, while not absolutely outstanding, is still a good solid anime that I would honestly recommend to almost anyone. Unless you just absolutely cannot handle blood and violence because again, there is a lot of that. 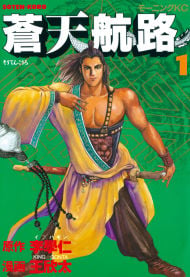