Sound of the Sky - Reviews 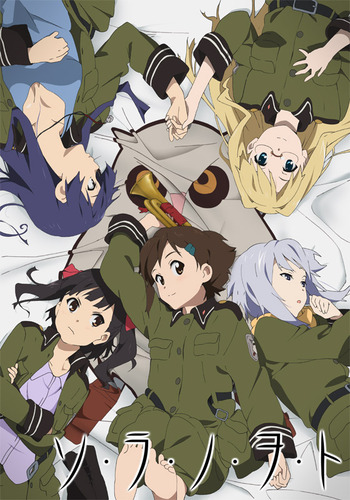 I have two main issues with slice-of-life shows: Most have extremely boring/over-used settings (some sort of school or a house/neighborhood, but always in upper middle-class, modern-day Japan), and have a cast almost exclusively made up of cute teenaged girls. Because of this, I find most slice-of-lifes stagnant and/or derivative.

So-Ra-No-Wo-To fixes the first issue. The setting was by far my favorite aspect of the series. It was imaginative, richly-detailed, well thought-out, and most importantly wasn't set in the present or in Japan. The in-show culture was just a giant hodge-podge of existing cultures, but it's interesting, and makes sense if you think about how the world could have gotten the way it did. Additionally, I can't think of another anime that applies slice-of-life to a military setting, I was very impressed by how well this turned out.

Unfortunately, this makes So-Ra-No-Wo-To's failure to remedy the second issue that much more disappointing. This is a military setting. That's pretty gender-neutral. If anything, it would allow for more male characters than female (every other squadron shown was certainly much more male-heavy). So why, WHY are all the main characters cute girls between the ages of 14 and 18?! It's completely unnecessary, and, I would argue, hurts the overall quality of the series (at the very least, in terms of believability- Noël's backstory could have been salvaged for me if she hadn't been a small child in her flashbacks, that totally killed all realism). I mean, the characters themselves were great (for the most part). At the start, it seemed like it was just going to be a cast of clichéd stock characters, but the ensuing character development was very well done and rounded everyone out nicely (Kanata didn't turn out to be a clumsy idiot, Noël shows great displays of emotion, Filicia ended up being really edgy, etc.). Granted, sometimes these characterizations are taken too far (mainly with Noël and Felicia in the last couple of episodes), and Rio angsted a bit much, but overall I found them refreshing from most teenaged girl slice-of-life protagonists. So why must they be teenaged girls? I can only assume it's to pander to the rampant moe fans in the audience, as there are quite a few instances of completely unnecessary moe-ness (why the dickens does Noël's pyjamas include zettai ryouiki? And I assume this was the reason for episode 8. Perhaps some people find such things cute, I, for one, found it rather unsettling).

In the second half of the series the drama kicks in, which was sort of a mixed bag. The majority of it was pulled off well, except for the slapped-on deus-ex-machina finale that reeked of unrealistic cheese (blech). Your best bet for enjoying the final episode is to take everything at face value. Because if you actually think about some of the things that happen, it's immediately evident that they're silly and/or downright impossible.

Comedy is usually the saving grace of slice-of-life anime, but So-Ra-No-Wo-To was sorely lacking in this department, even before the hard-hitting dramatic parts come up. Not really a major deal-breaker, because it had other things to offer, but if you're expecting humor, you may want to reconsider, because I can only recall a few short instances where I found anything to be funny in this show.

It was a pretty good short anime considering how the story was all based on peoples dreams and past and how war is never a good thing. but the story did a good job of adding enough humour to not let the episodes get dark and dull. every character was introduced and potrayed brilliantly. Difinitely should watch if you are looking for a short but good anime.

I don't think I've ever gotten hooked on a show so fast in my life,  I find it quite unbelievable an anime of this caliber has gone so widely unoticed, I might be wrong but I don't see many people talking about it in the community. Nevertheless I'm glad I stumbled upon it.
I was instantly sold on the concept while watching the first episode. The world they have created is completely unique and you would be hard pressed to find something similar.
Everything for the setting to the lore of the land is very intriguing, at first you thing it's about soliders, but then they add this very cool fanatsy element with Demons and fire maidens, which is very interesting as the overall structure of the show seems to be slice of life and not action heavy.
If  I were to try compare it  Iwould say:
It's as if Girls Und Panzer were merged with Hibike Euphonum and Cross Ange with the characters from Idolmaster.
What I found even more impressive is how they handled this information. There was no exposition dumping and instead we are given hints as to what this world is so we can piece it together slowly ourselves, which is how good world building should be done.
One of the main reasons I fell in love with this show instantaneously is not just the world they've made, but the characters that inhabi it. Each one is established with care and end up being extremly likeable and diverse.
What enhaces this is the expressive animation they are drawn with that has very detailed gestures that make the characters seem more human.
The background art is very pretty too, but is also good at making things spooky when called upon.
If that wasn't enough the music in this show is truly beautiful and has one of the best openings.

All in all I would definitelty recommend this to anyone. It has a bit of everything to diversify itself from all the other Cliche' fantasy anime. 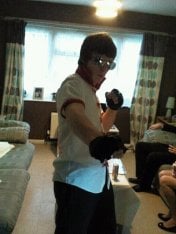 I'm just going to pretty much start and end with that word, it really does make up 100% of what this anime is.

This anime really did pull every single emotion out of me, I found myself laughing one minute then crying the next!

What I really do like the most is how this anime builds up over the 13 episodes, The relationships between the characters is planted in episode 1 then is taken care of so amazingly that you feel like you are growing up with them yourself.

I really can't see why anyone would dislike this anime, if your looking for a Natsume Yuujinchou/K-ON then this is it!

I will be re-watching this MANY times over.

just got done watching this series and I only have 2 words to describe it, "simply beautiful."

The story itself is really good. All the characters get really well developed throughout the show and by the end you just love them all ha! The mood changes in Sora no woto are perfect, starting off light and funny, then moving toward the more serious as the series nears the end. Although the only thing that I didnt like is that some elements of the didnt get fully explained. There is a 13th episode but its more like an ova and doesnt really deal with the main story of the series.

The animation in Sora no Woto is absolutely stunning, by far the best I have seen. The background, lighting, and character designs are simply breath taking. Its just pure enjoyment for the eyes! It definitely has a more realistic drawing style to it. So the characters dont make crazy faces or doing anything like that. Which really helps to set the mood of the story.