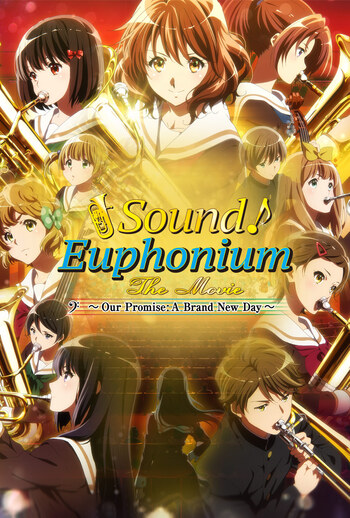 Instead of a music anime, Sound Euphonium Movie 3: Our Promise is a school drama with music as a backdrop.

What makes a good music anime? I believe it is 1) a well-executed combination of music and animation 2) to develop characters or plot. For instance, musical struggles might probe the characters - “why music?” - on an individual (Your lie in April) or a societal (Carole and Tuesday) level. These moments allow the audience to see personal motivations, desires and even morals of the characters.

Particularly in the Sound! Euphonium series, adolescent struggles were represented, culminated, or even resolved in musical performances. During these performances, we can both see and hear the struggles of the characters. Notably in season one, the trumpet solo for Reina and Kaori, the difficult euphonium passage for Kumiko, even lame Shuichi’s struggles in the trombone section were all musical parts that appeared repeatedly, not only as passing moments but emphasis for drama between the characters. At the final competition, all of these musical themes reach their pinnacle, strung together in both the music and the visuals.

This is where the movie Our Promise fails as a music anime. It doesn’t establish any musical moments. The only emotional musical parts were in the beginning of the movie Kumiko playing Asuka’s theme from season two, and Nozomi and Mizore’s solo during the performance. But those both relied on previously established drama. What is the point of this new drama among the freshmen? It is not directly connected to the music - the music is just an accessory. We see no reason to root for the characters during their performance. The performance was merely a nice animation of a band whose members I didn’t feel invested in. (“Nice”... except for the shots with the CG modelled charas… gross.) There was some success during the Sunrise Festival to connect Mirei’s eventual cooperation in the band to her enjoyment of the performance. But that was only something we could see from the visuals, not the music.

This movie might have worked a lot better as a series with the additional time to develop the musical themes. But the side story movie Liz and the Blue Bird connects music and drama much better. Nozomi and Mizore’s solo piece plays throughout the Liz and Blue Bird storybook sequences and resolves drama in the final rehearsal of the movie. At 10 minutes shorter than Our Promise, this movie manages to 1) establish a musical theme and 2) use it to emotionally invest us more in the characters. In Our Promise, time is wasted with drama that is never brought to fruition, musically or otherwise. Like… Shuichi and Kumiko? Just get that limp and boring relationship outta there. Neither character learns anything by the end.

Looking into the (hopefully upcoming) season 3, I somewhat worry about my current dislike of the freshman, but I do love the series and I hope that parts of this movie will pay off. If the show returns back to all of its strengths for Kumiko’s final year, I’ll be rating that out of buckets of tears.