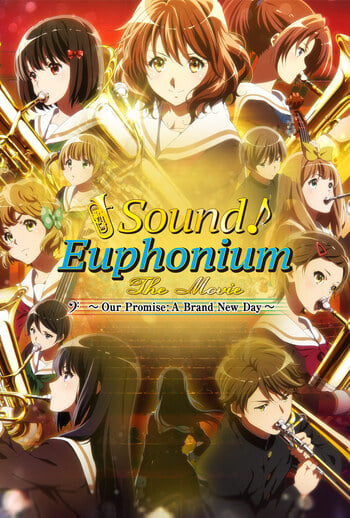 If you're looking for manga similar to Sound! Euphonium Movie 3: Our Promise - A Brand New Day, you might like these titles.

Konatsu Miyamoto was rejected to sing with the other members of her chorus club by the teacher because she was missing "something special." Being her last year in high school, she felt like doing something crazy: She quit. In the place of her former club, Konatsu comes up with the idea to make a new chorus club, inviting the people around her to join. With dreams in each of the member's hearts, they live out their high school lives.

Kamine Shuuta is a person who can see a person's heart (literally). Tokisaka Hibiki is a saxophonist in the music club. Shuuta first listens to his saxophone on the terrace and wanted to ask something but Shuuta tells him to come to his performance later in the ongoing school festival. After seeing Hibiki's performance, he see the notes of music as hands which can heal the wounded, tend the broken, break the shielded hearts. After the performance Shuuta asks Hibiki if there isn't a person to whom your sound doesn't reach. Shuuta says although Hibiki's sounds can seize hearts of others and move them, his own heart is guarded and is unmoved and troubled. Hibiki then takes Shuuta to his childhood friend Moko who loved singing but somehow became mute. Shuuta sees her as a sea of depression and despair. Thus begins their journey to heal people's hearts with music.