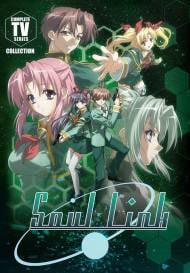 All is not as it seems on the part civilian, part military Aries space station. While visiting tourists or a fresh batch of cadets are just business as usual, a terrorist group planning an attack and a mysterious woman constantly getting "lost" in forbidden areas of the station is not. Soon enough, the regular life on the station comes to a sudden stop as different factions face off in its narrow hallways. And as the battle rages, the masks people wear are torn down. Unexpected alliances and bitter betrayals, love and sacrifice; nothing brings out people's true nature like war.

Ok, where to start?  I have to say, I dont think I have seen an anime as bad as this one, or at least not in a long time.  Really I wish I hadnt ever watched it, but I did and now Im gonna review it just in case someone else was thinking about watching it. STORY: The story in this one is so back and forth and off the wall its genuinely impossible to try and summarize.  But lets just say it starts out with a terrorist attack on a space station and then gets weird, and THEN gets tripping on acid weird.  I mean plenty of animes have strange plot devices or magical abilities but this one manages to start out completely realistic and then in one episode turn into Inception meets Alice in Wonderland.  And if that wasnt bad enough, parts of the plot are just plain moronic.  Like seriously, after hijacking a military space station with tons of heavily armed mercenaries and threatening to nuke the entire world with the ordinance on board, youd think that they would have some serious demands right?  Well at first they demand the release of political prisoners belonging to the group they are apart of, but REALLY all they want is money.  I swear to god... in my head I was hearing; If you dont give us TEN BILLION MILLION DOLLARS, were gonna blow up the whole world... no, no... you can just wire it to my Pay-Pal account.  Im just at a loss with this one. ANIMATION: I would seriously be ashamed if I was an animator for this one.  The actual art is pretty good, simple but well done.  But it looks like it was animated by a two year old.  Im pretty sure they paid a decent artist to draw every ten frames or so and then got some art school dropouts to fill it all in. SOUND: The sound was decent at best.  Nothing stood out much more than that.  The music was barely noticeable but it at least usually fit the scene.  The sound effects were passable but nothing special.  But the voice acting was worse than some english dubs Ive heard.  The male lead sounded like a twelve year old homosexual whose balls havent dropped, the females were all whiny and were either screaming or crying the whole time, and pretty much everyone else was just monotone the whole show. CHARACTERS: I do not think I have ever loathed anyone as much as the lead in this show.  As I mentioned before, he constantly sounded like he was gay and about twelve years old, he was whining more than any of the women (which is a hell of a feat but in fact on more than one occasion, one of the female cast would sack up like they had more testosterone than him) and Im pretty sure I could find more spine and/or testicular fortitude in a cup of Jello.  And everyone besides his brother and the other military or mercenary people were the same way.  Seriously they were supposed to be MILITARY CADETS and between the five of them they could only muster about as much courage as a six year old.  At one point you can almost hear the lead thinking "but, but, do I HAVE to take this gun and shoot at the terrorists who are trying to kill us?"  And dont forget the girl who only joined to follow her boyfriend (and she follows her boyfriend around the entire show), or the other girl who youre sure is totally lesbian with her best friend (who she keeps almost getting everyone killed trying to save) until she ends up with a guy (the WHOLE show they keep showing more and more of a flashback from a secret meeting on board the station, and up until the VERY END I keep thinking the last one is going to show them kissing, friends just arent that close), OH and the father who doesnt let his daughter he abandoned as a child know who he is until the VERY end.  I really wish I could adequately write how horrible this anime was.  Unfortuantely I do believe the human language lacks what it would take to describe this. 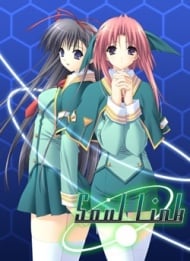