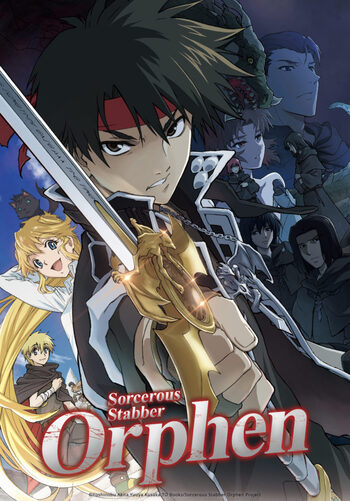 This is the first time I'm reviewing an anime that has yet to finish but it's also the first time that I've thought an anime was pretty good whilst the ratings for it are so terrible. Right now it's 2.7/5 and I don't know whether that has something to do with the fact its a remake or what but it's pretty good so I thought it'd be fun to provide people who might be interested an alternative to that rating in this review.

Orphen is about a prodigious sorcerer who went rogue after a failed experiment lead to his sister being transformed into a dragon - with nobody within his school believing she can be saved and willing to help. It's an action-adventure shounen where the protagonist Oprhen travels around with companions in a corrupt and dangerous world. It's fast-paced with far more action than slice of life.

Whilst there are elements aimed at younger audiences, Orphen continuously emphasises the threat of death in the battles and the plot. The world of Orphen can be surprisingly dark and menacing, which I really like, it makes the action more exciting when it feels like the heroes are facing real danger. Many lower-rated shounen include things such as ecchi, melodrama, overbearing comedy, weak characters & plot. I am genuinely surprised to see Orphen with such a low rating because it doesn't have any of that. The plot delivers what you'd expect from a shounen, a likeable protagonist with a clear motivation and an interesting world-setting. This combined with how intense the action scenes can be and the lack of any distracting or degrading factors has led to me really coming to like and appreciate the series.

As someone who really dislikes gigantic eyes on all of the characters it's nice to see that in Orphen, people have well-proportioned features. The aesthetic of the cities is medieval Europe and many of the castles look great, the landscapes of plains and forests are also beautiful. The spells feel really heavy and impactful and appear and sound great, I get excited when I see people casting magic in this show.

Battle themes are exciting, voice acting is high quality as usual in Japan, the soundtrack is good overall I'd say but haven't heard it all yet.

It may be because the show hasn't finished yet, as of writing it is episode 10 but as a result of the fast-pace few characters have been fleshed out much. I think this is standard of most shounen, it's all comedy and action and very little character building. It may improve with time and it's a bit unfair to rate this section whilst the show is ongoing.

Orphen is a really solid show, it's one of my favourite of this current season and I can't for the life of me figure out why it's been so badly reviewed by other users. Perhaps the original is even better or there is some scandal I don't know about? In any case, Orphen is a well-done shounen set in an interesting medieval fantasy world with high octane battles. If you don't like the shounen genre then I don't recommend it but Orphen might be one of my first recommendations in the genre and I've watched a lot of shounen, it's really good!

Is this a good introduction to Orphen? Probably not. Have I seen the original anime not yet.

Now I won't be breaking down everything down in this anime. I will also try to keep this spoiler free, so I'm sorry if it's too vague.

It's very lacklustre anime, that doesn't seem to know whether it wants to be a prequel or not. The amount of flashbacks to explain current plot, events or arguments/grudges characters have with each other are too numerous. Nearly one per episode. Do I think it would have been a better series if they started this reboot with the first season being a prequel? Yes.

The art style is very reminiscent of 80s/90s anime, which is perfect for this anime. I find if they had tried to make it too polished like current new series airing, it just wouldn't be Orphen. Try to imagine Vash the Stampede all shiny and remade, not going to happen right.

Now as for the characters, I do have a slight nostalgic attachment due to playing the ps2 Orphen game. Although besides that I really cannot see a reason to like any character from this series, Orphen's convictions seem to change on a dime (with the exception of not killing anyone). And the other characters are mostly flashbacks due to being killed off at the beginning, or hardly have their characters developed.

At the end of this season I felt like I wasn't watching Orphen the anime, but more so Azalie the anime.

Will I be watching the next season? Yes. My favourite seiyuu plays Orphen... so for Showtaro, I will continue.

I have watched only 1 ep.. the musics, the moving, the graphics...is terrible. The"chants" is terrible too.  Our main character is a dark magican, and much years ago one of him friend is turned into a dragon. The dragon is really not looking good, its boring, and appear every 5 mins, i dont understand why, theres no understandable story.

Im a little sad to see so hateful/bad review. I Don't review often but i think it's necessary here. I think the bad review is more from nostalgia for the first anime from 1998 than anything. It's a reboot so it's normal that some part in the story be different but i don't think it's ''trash''.  I just want to review so the people have more vision on the reboot.

The animation and the visual is very nice, it have the feeling from 1998 but polish i think.

I like the fact we see more of the apprentissage of magic than in the anime from  1998. I'm always exited to see the magic in action.  What i dont really like is how the dragon is draw in the new version vs the old. We feel like it's more ''a pet'' than ''a beast'' .. but like i said, i dont think this anime is trash compare to its predecessor, It's simply different ! we have like 20 years the difference so it's normal, no ?

Hope that it's helpfull!