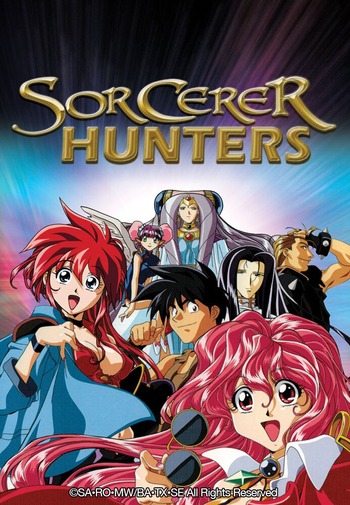 Run of the mill MC being a skirt chaser in a fantasy setting, although I enjoyed it more than average.  Most of the episodes are episodic with some story line sprinkled here and there until the end.  Typical for anime around then.

Quality was a little outdated even accounting for it being made in the mid 90's.  I did watch in 480p so that may have had something to do with it.  Wasn't a deal breaker though.

Loved the OP, ED is good too.  Some notable BGM.

There's a total of 5 in the main group, although two of them are pretty much side characters.  Interactions between MC and the two female cohort is the highlight.  Chocolate & Tira Misu were my fav, cause reasons.

Not a must see, but if you don't mind watching the older anime and want something light that you don't have to pay much attention to then give it a shot.

So far this is a pretty good anime since I’m watching it in 2012 so I have to give it some leeway in the scoring. I do intend to update this review when I finish this series so this is just a starting commentary.

The story well so far it’s kind of plain but it is still funny.

The animation is old school but still good.

The sound was epic, I love the sound track but I know a few people who don’t so it may not be as good as I think.

The main cast are good but the supporting characters are extremely flat like 2-dimetional most of them have no real reason or exist accept to maybe say a line(or nothing at all) that sends the main cast on their adventure. The villains are even worse because their motives are either nonexistent or just plain stupid.

Overall I recommend this series so far to fans of the vintage type anime.

Well just finished the series and well noting really changed I don’t feel I need to update any accept to say all my comment stand and last throughout the series.

Wow talk about nothing to go off of this is a pretty sparse review. The point my younger self was trying to get across was that this anime was probably good at the time of its release but is too dated to be enjoyable by any but hardcore fans. Many of the tropes we commonly mock nowadays are used genuinely in this show making it seem like more of a parody than anything else. I don’t recommend this show to anyone who is not already a fan of old school anime.

I really do love this show. The comedy is very tongue and cheek but yet it has a lot of interesting characters. It also has an underlineing meaning behind most of the episodes about family ties.

We meet the characters a bit forcefully with some being rather pushy and perverted and others being rather expository. They imply that they have been traveling around a great deal already and so some things have to be worded out a bit oddly so we could understand them. I do have to wonder why the girls end up changing personalities when they take off their clothing. I’m also not sold on their names being the names of pastries. It makes me think they should be French or something.

I wish Big Mama would actually explain a bit more about what the flash backs are about and who the male is that she thinks about it. I also wish they would say her real name a bit more then calling her Big Mama. No offense but when they call her that, I can’t help thinking about a large black women being called that instead of her. From what I know of, she isn’t even a mother to them so why call her big Mama?

The animation is rather nice, having that old vintage charm. Sometimes the characters look stiff, and other times it’s like they have runny egg symptoms. Carrot is the most out of control on the runny eggs images where his body doesn’t seem to want to keep his shape. He frails his arms around like crazy and at times looks like he’s actually broken or made from rags. The other characters don’t really have times like this (Well, the girls mostly do but not as badly as Carrot) so why change it.

The English voices are alright in a bit, though Terra and Chocolate are actually really annoying. They are high pitched and rather whinny. I don’t have much wrong for the males because they don’t hurt my ears. I fell in love with Marron’s voice, the younger of the brother. The scripts are pretty forced and end up having to explain a lot sadly, taking away the charm. Other then that, the rest of it is pretty tongue and cheek with the comedy. Sometimes, how they talk is actually way too hard to figure out. They end up mumbling or screaming into the mic which makes things hard to understand.