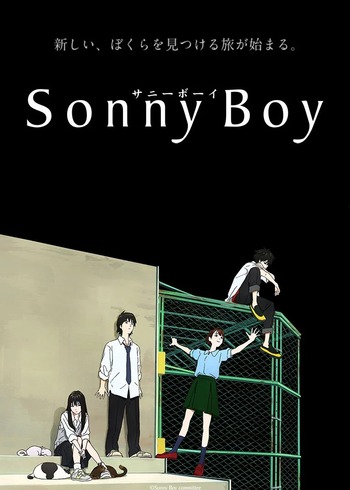 It's pretty rare I get almost to the end of show just to drop it. And there is a good reason sonny boy is boring plain and simple. Not every show needs to be action/shounen/ thriller and a lot of shows do a great job doing kits that but not this one. Constant rambling that gets the cast no where long potinless monologue cliches that mean nothing and goes nowhere. Still give it 3 episodes if you curious and if you feel even slightly bored drop it. Sonny boys doesn't get more exciting. Regardless of animation or some decent characters you can't excuse a boring story. I don't think it's worth your time there are so much better shows to watch

I'm giving this show an amibiguous 3.5 stars because I'm not really sure how i feel about it lol. I understand that the show isn't meant to "make sense" and that it's all very symoblic and surreal, but it was a whirlwind trying to decipher what each episode was "about". To watch this show, you kind of just have to go in understanding that you can't really predict what is going to happen. A lot of things go unanswered and are up to our interpretation, but i like having closure lol. The twinky kid with the star on his cheek was so interesting in the first few episodes but then he just stopped being in the episodes lol. He said, "bye guys we're gonna go fly away in a giant cube and disappear in this odd dimensional space forever!" That was odd to me. I kind of wanted to see their perspective but instead we just saw Nagara and Mizuho with some Asakaze and Ms. Aki side plot. (Ms. Booby lady teacher is still an enigma to me i don't undesrtand if she was really the teacher or another student dressed as her since they said it wasn't the real teacher that they knew???) Also the whole War and God thing confused me.

I liked Mizuho and her grandma's cats a lot though. It's just like me to love the girl with long dark hair and bangs character. It's an added bonus that she like's cats and she's got a little attitude. I also loved the dog!!!!!!! Yamabiko! he was hot ngl...and his voice was hot.... anyway. I also liked Rajdhani but why did they have to make him a caricature of an Indian boy... he was cute though, i liked his random parrot and how he eventually became a forest and looked after the animals that couldn't travel out of the Drift. I also liked Nozomi in the beginning but then she kind of stopped being a main character half way through (at least to me) it felt like she was drifting and then ofc she dies, but i had a feeling that would be inevitable as she saw the light and was fated to die before graduation. I wonder if the other Nozomi in the world that they went back to will still die... hmmm.

It was an odd show, it intrigued me so I watched all the episodes. There was only 12 episodes so it wasn't a huge commitment lol. I had a feeling that I wasn't going to get a satisfying ending about halfway through watching though. I haven't watched a whole anime through in a while so this was nice. I guess I'd reccomend it only if you had nothing else to watch and just wanted to watch something random. It kind of reminded me of Fooly Cooly and Promised Neverland. The soundtrack was also kind of a banger at times.

I guess that's all I want to say about it. I tried to Google some things for more clarity, but it's all up to your own interpretation and it isn't meant to have an explained ending. :-)

good story, good songs, good animation but unfortunately everything drags on for so long over the episodes, it gets more and more boring and you lose more and more interest to keep watching , keep watching, the end wasn't even exciting

Honestly.. all I have to say about this show is how it makes me feel.

They're in a weird dimensional space drift with all these funky powers some really powerful and some not. Everything is a twist on reality itself and its laws like physics space and time. Thats not to say its chaotic, no not really. Its... confusing, in a strangely good but eerie way.

---- Also mild spoiler warning past this point?? (I dont talk about what happens really but if you just want thoughts on if I think its good or not and like a summary, maybe read after this point after youve watched most of the episodes because its kind of better going in a bit blind without any expectations.)  -------

Honestly, this show is really good at giving you the same sense of feeling the characters in the show itself have overall. The first couple of episodes are a kind of empty pit of confusion and.. despair? Until you get hope. Every time they grind their noggins into discovering new things that could potentially become the solution to every problem they have! Except then suddenly that knowlege lets them know that its a lot more complicated than just that, and suddenly its kind of like starting a new with a new kind of hopelessness but also closer to whatever the "goal" is intellectually or physically.

It kind of drives you into a feeling of hopelessness and confliction but a strong want and a thin path forward, so literally what the characters are going through. The longer it goes on and the more gets introduced the weirder and more conflicting but almost closer to closure they are. The characters feel real with personal problems that are serious and psychological but fitting for teens. Some of them inhabit very relatable real flaws that I atleast resonated with.

I think this show is very overlooked, but for very understandable and perfectly fine reasons. Its a real oddball of a show and it feels really psychological. The whole tone of the show is kinda just ???, almost melancholy. I didn't really like it at first but I was really curious because I just couldnt really get the whole tone and feel of the show down like... at all. Thus, I understand most would likely drop it. Theres no reason to try and make sense of it, and I doubt many people like that kinda stuff anyway.

So, if you like melancholy or psychological anime (not horror, its not scary at all), or you just really like deep stuff then sure! Would recommend its great. If you need action, humor or cute stuff maybe fanservice, this anime isn't for you.

Do I love this anime? No. Its a good watch, maybe something to just watch when you dont have much else to do or are feeling existential. Its not something you'd rewatch, its just a one time woah that was funky. Should you go tell everyone around you about this anime? Not really. Maybe if you think that person would really like this kinda stuff, but otherwise.. nah.

This is a very cerebral show, best watched while paying a lot of attention because it's not the sort that you can follow passively. Even then, you might be at a loss for what the story is really saying.

Story: We follow a group of classmates who have found themselves (and their school building) sent into another dimension. Not only that, they've all been given some kind of special power. At first, we follow their initial squabbles and exploration as they get used to their powers and the rules of this strange new world, but eventually the show shifts gears into a very high-brow/abstract look into the psychology of this dimension and the ramifications of what it means to the lives of those stuck there, and finally shifts into a "2001:Space Odyssey"-esque visual trip as a handful of characters attempt to make their way back home. Now, on the surface, this is exactly the kind of show that I love to see... but I don't know if I was just not in the right headspace for this or if there's something wrong in the presentation, but I felt bored and/or confused most of the time rather than engaged and interested. The show spends a LOT of time on alternating trippy visual effects and non-expository character dialog, so it can be hard to identify which elements of an episode are actually important to the story and which are just world/character-building tidbits. Ultimately my biggest complaint is just the ending. I'm not a fan of how it turned a climax event into just a depression scene. 3/10; Not bad, but not really my tastes right now I guess. Would've been much higher if it had a satisfying ending.

Animation: Sonny Boy is a wildcard when it comes to animation. The folks at Madhouse really put in a lot of work and effort to make this show stand out as unique, and it pays off in spades. From the character designs, to the color pallettes, to the backgrounds, to the movements and everything in between, this show is absolutely beautiful and bombastic. It's like nothing I've seen before, and I love it. I have nothing but praise for the visual spectacle on display with this work. 10/10; Brilliant stuff.

Sound: Strangely enough, I can barely recall any soundtracks. I'm sure it's one of those situations where "If you do something right, nobody will know you've done anything at all", because normally a standout song (or standout absence of songs) is immediately apparent to me. Of note, there's not really anything resembling an OP or ED theme. The episode just... runs. Beyond the music, the Voice Acting is not bad - rather intentionally the kids all sound like school kids with their own emotional problems, which isn't exactly the best *sounding* voice work from an aesthetic standpoint, but demonstrates good voice acting *skill* to achieve. 7/10; Above average.

Characters: The characters in Sonny Boy are all over the place, but in a good way. They're all distinct and have very particular personalities that constantly make you wonder "Is this supposed to be the show's 'bad guy'?" but ultimately they're just another student aboard this wild ride, trying to make sense of it all in their own way. Oddly enough, the most "plain" characters are the ones the show focuses on the most, which simultaneously makes them the best protagonists, and yet the most boring characters. 8/10; I love the dog character.

Overall: Unfortunately for my tastes, I have a hard time rating this any higher than a 5 just because of how upsetting the ending was. Like, honestly I would've given it a 7 or 8 if it had just ended an episode earlier, because ending on a cliffhanger like that would be well within character for a cerebral story like this. Instead, we get a whole episode of depression and de-escalation that takes the fun and excitement out of it. 5/10; I wanted to love it, but I just can't.