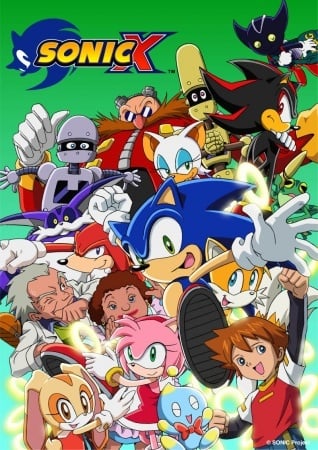 I loved this show as a kid, it was what got me into the Sonic franchise, and I still love it to this day. It has something for everyone, from tense high-speed action, to the more relaxed episodes where nothing major happens. Plus, it sports all of your favorite Sonic characters, from Sonic the Hedgehog himself, to the notorious Dr. Eggman.

The show lives in infamy these days, and entitled fans who will try to convince you that the 4Kids dub is crap and the original uncut japanese dub is the only true way to watch it IF you absolutely must. But I don't care about any of that! I love the english dub, censored or not, to me this is when the show truly comes to life!

So we start off with Sonic and his friends getting warped to our world via Chaos Control, and then follow them as they try to settle in their new envionment, all while occasionally budding heads with Eggman and whatever plan he has cooked up. The first season focuses mainly on Sonic and friends trying to stop Eggman, while both parties are on a constant race for possession of the mythical Chaos Emeralds.

The second season follows the event of Sonic Adventure 1 and 2 for the DreamCast, introducing Shadow the Hedgehog, Sonic's rival, as well as the events of Sonic Battle, while ending the season on finally sending Sonic and his pals home to their own world.

The third season, that I like too, but most people who like the show dislikes this one still, is set partly in Sonic's home world, and partly in outer space, as Sonic and friends try to stop a new threat, the Metarex, from conquring the universe.

Overall, I think the show keeps an interesting and engaging plot throughout, with enough memorable epic moments to keep you invested. I shall never forget my excitement the first time Sonic transformed into Super Sonic :D by far my favorite episode!!
The animation too is top notch and stays true to the original character designs from the games, and the characters' personalities are all portrayed very well, thanks in part to the amazing english voice cast, of which Jason Griffith will always, to me, be the only true voice of Sonic - but hey, that is just a matter of opinion ;-)

If you like the speedy blue hedgehog and want some cool anime action that everyone from kids to adults can enjoy, I can't recommend this spectacular show enough!!

How? How could they have messed this up? Seriously? HOW?

In the age old dispute of Dub Vs Sub, Sub is more preferable, like a kick to the nuts is more preferable to having your skull drilled! folks that hate 4Kids, get the sub, you will get a better quality, and the un-edited versions make a hell of a lot more sence!

So a breaf Synopsis: In another world (that fans nickname Mobius) a Heroic Hedgehog called sonic Fights against the evil Doctor Eggman, in a daring raid on Eggman's stronghold Sonic Tries to stop Eggman from unleashing a powerful weapon, using the energys of 7 gems called "Chaos Emeralds", but when they were used it transported Sonic and his friends, allong with Eggman to another world, our world, EARTH. Not Sonic and co. with help from one of the natives of this world; Chris thorndike and his Uncle theu must secure the 7 chaos emeralds from Eggman to save this world and get back to their world!

The story is a basic interpretation of the latest 3D sonic games, from Adventure to, as some say Shadow the Hedgehog... Unfortunately you have the creator's own take on it... Even such great sonic relationships such as Tails and sonic are over shadowed by the universes own... empty characters!

Speaking of Characters; from the games we have: Dr Eggman, Sonic The hedgehog, Tails the fox, Knuckles the echidna, Amy Rose, Cream and her pet chao Cheese, Rouge the bat and eventually; Shadow. Tikal and Chaos also appear in the Adventure arc.

I Won't lie to you, I did not give a single cair to Sonic X's own cast! And that's a impressive thing since tho only other non-Game character I disliked was Attone from Sonic The hedgehog (SatAM)!

Story wise, it's passable... there is some good writing, and the fillers are... bad, the first "Saga", collecting the chaos emeralds, was... a mixture of good and bad... Some good episodes, some bad, some... basically a Meh rating!

The game interrpritations are interesting the Sonic Adventure 2 ark was brilliant! Maria's wish was great even with Chris', how does one say this... annoyance? it fills in and answeres questios that the game offers!

Sound wise there was a lot of interesting things, in the Origional/Sub (which is what I'm going by) I have No complaints on, both dub and sub and the Japanese crew are brilliant! The English voice cast (since I'm here) were OK, but some of the lines were just... badly executed!

Oh and Rouge's VA Sucks in the English cast! The only character who I have a strong dislike for the VA! Everyone else I can tollerate.

The animation... Is bad, but if Neon Genesis Evangelion has taught us anything, animation doesn't have to be awesome! But sadly... there is hardly anything to redeem this...

Oh wait! Sonic and co. Swear, and there is some... sexy references! I the Japanese version anyway, Such as when Rouge is being arrested by a female police officer Rouge basically sais "So, you're into S&M?" Much to the officer's Embaresment ant he nearby male's Joy.

There are some references to other sonic material, such as Chris's Uncle Chuck, Like Sonic's Uncle Chuck in Sat AM, Archie and Sonic Underground. And also the aliens in the Last series are called The Metarex, the same name metal Sonic was given in the UK publication Sonic the Comic!

But small nods and jokes just cussion it slightly... I was just able to tollerate it... but stopped because I couldn't bear it, sorry folks, maybe someone with a love for punishment will do a better review!

Sonic X is an anime that fell to mixed reaction. From "OMG SONAMY" to "Eh, it's okay" to "WHAT THE %$^& IS THIS $^&*", it's pretty...er, mixed. The score you see to your right is of the Japanese version. The English version would be 5.5/10. Kids will like the English version, and older audiences will like the Japanese version (see "Objectionable Content" for information on both).

Japanese version: One emotional scene, a few mild swear words, mild romantic scenes, implied more romantic things (if you know what I mean), and fantasy violence. Nothing above what's in recent cartoons on Cartoon Network that are rated TV-PG.

Mature viewers (Japanese version): 7+ (AKA the audience that can begin to read subtitles).

Alright this series is great if your a huge sonic fan and isn't like any other sonic show that was made by DIC. I do Fairly feel nostalgia towards this series i watched it on 4kids and Kids WB and looked towards saturday to wake up early just to watch this show. Their are some great fight scenes and funny gags in this show. I reccomend this for any sonic fan.

this is ma first anime review

so im gonna review one of ma faves 2 start

Me as an anime fan and a sonic fan found this quite pleseant 2 watch.

Im not going 2 rate this anime with a nostalgia meter OR a sonic fan meter, i will be rating sonic x with the quality of the story. Having sonic in something doesnt always save it YA KNOW!!!

2 get started we will talk bout the story

The story kept me watching somehow. Some people said sonic x is boring because they saw A VERY INFAMOUS DUB but we will get into dat later.

SO as i was saying, it kept me watching somehow. I THINK IT HAD SOMETHING 2 DO WITH THE FACT THATIN LATER EPISODES WE GOT INTRODUCED 2 SHADOW (emo sonic lmao XDDDDD) and rouge ( BAT BOOOOOOBS (.)(.) ) and we were all like

WOW THAT GUY GOT SONIC INTO TROUBLE

MAN THIS IS AWESOME

this is a thing that new sonic media all together lacked off, like lets go 2 sanik boom

WE R STUCK WITH THOSE UGLY AS SHIT REDESGINGED RETARDS

but thats not the point here

lets get 2 the animations

nothing 2 talk about really

yeah unlike one piece , sonic x did not get a funimation dub

so we got stuck with this shitty excuse of a dub

the sound quality is pretty bad though

but its not terrible

4KIDS THOUGH REALLY F**KED IT UP

no offense but seriously u kinda failed here

the characters r all gr8

WTF IS THIS KID NAMED CHRIS

this character CAN GO F**K THE F**K OFF

THIS GUY ONLY SCREAMS SCREAMS AND SCREAMS

4KIDS MADE HIM VERY F**KING ANNOYING

AND NO JAPAN CANT SAVE DIDLY SHIT SADLY

the characters kick ass ( not chris )