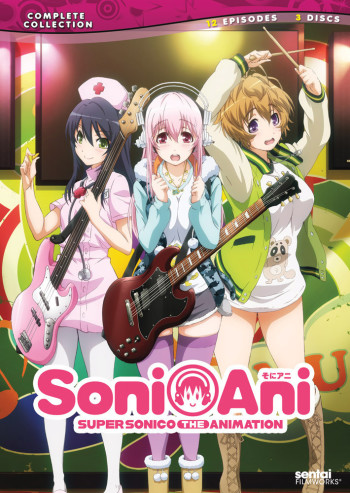 If you're looking for anime similar to SoniAni: Super Sonico The Animation, you might like these titles.

Both anime feature a lot of young women playing instruments and a whole lot of focus on slice of life stuff (keep in mind that SoniAni is far more vapid than K-On! ever manages to be). SoniAni is very much ecchi, while K-On! usually manages to not sink to such low tactics. The cast in K-On! is much more varied and features several mains, while SoniAni is basically just about Sonico. Still, if you saw one and want more female characters playing instruments now and then, do check the other one out.

K-On! Is probably one of the best animes with a music band that I have seen and I highly recommend to anyone who enjoys music and anime. Also, for anyone who enjoy a good slice of life comedy.

Another amazing music-related anime with an all girl rock band and absolutely no romance like in SoniAni: Super Sonico the Animation. K-ON! is highly recommended. Lots of humor, lots of pure friendships being expressed, lots of love of music (mainly rock music), some drama, some slice of life, and lots of love. Gotta also love the characters.

If you’ve ever lacked the enthusiasm for a daily workout, Hinako is here to help! Once human, she is now a busty anime character and ready to lead the viewer through sit-ups, push-ups and squats. Her scant outfits and bouncing enthusiasm are sure to stimulate the otaku community into shape in no time!

Both anime are voyeuristic –Hinako incredibly so– and have plenty of time dedicating ogling the curvacious young female lead. Sonico manages to have some plot now and then, but a lot of it is just flimsy pretext to engender more bikini-wearing.

This and Love Live! Sunshine! are both highly recommended. This focuses on a group of pop idols as a group. but they show how much they cherish their friendship and how seriously they take working to become a professional Pop Idol. They work for it to become popular as a group. Lots of competition. The animation with them dancing and singing is really catchy and alluring. The humor in it is also attractive. Pretty sure there is some drama. But it's mostly a chill anime.

Both anime revolve around a girl who wants to produce music with a band, the only difference being that Fuuka is a drama comparable to love live while Super Sonico is a more laid-back slice of life series like K-on!

What do you get when you cross a farmer, a seductress, and a gigolo? The Nerima Daikon Brothers! These two guys and a gal would like nothing more than to sell out arenas and entertain the masses, but a lack of money and fame make this dream impossible. With the help of lecherous producers, a daikon-stealing panda and a crew of backup dancers, the trio must sing their way to the top and build the stadium of their dreams, lest they stay unknown and penniless forever!

One summer, 27 seconds on a street corner. We always forget something.