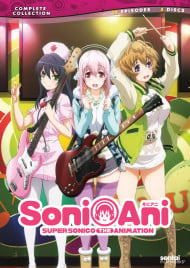 As a big fan of Sonico myself, this anime is great for me. It's a relaxing slice of life story/music anime centered around our beautiful shy girl, Super Sonico. At first glance, people would think she's just a mascot with no personality just there to look pretty and provocative or simply just "B00BS" but that’s not the case. You get to see Sonico's character shine in this anime which is that she is a huge cat lover, loves rock, is a big nerdo, and works hard for her band, her grandmother's restaurant, and anything ! She is as sweet and she is as cute. Story 8/10:There really isn’t much of story going on, it’s basically just Sonico chasing her dreams in music and simply enjoying the wonders of life. One episode I really enjoyed is episode 7, which is titled, Star Rain. That episode is just the definition of a peaceful Slice of Life, which Sonico travels to Niigata and we can see the nice scenery and it makes a nice aesthetic, I really enjoyed that one scene where she stops by a glassmaker's shop in the rain. Animation: 8/10The art is pretty good, the backgrounds are well drawn, nothing "meh". Although, I kind of wish the characters would look more like Tsuji Santa's art style, it does but like even more if you get me ? But anyways art isn’t bad. Sound: 10/10Opening is really catchy and also adorable and screams out what is Super Sonico ! I sometimes listen to it as Nightcore version. lol The endings are also cute since each episode has a different montage of what happened in each episode, and also feature a different song in each one by First Astronomical Velocity. Nightmare Buster and Star Rain are my favorites. Characters 9/10: Suzu, Fuuri, and Kitamura, are great too. First, Suzu, I like how in the anime they explain how she met Sonico and Suzu wanting Sonico to join her to see a concert together was so wholesome, so I enjoyed that very much, and she's quite the tomboy as well. Fuuri, the one who always wants nikuman, hence why I call her "foodie" since her name sounds like that. xD I like the concept of three-girl band so FAV is one of my favorite fictional bands, although, I wish we could've seen more of them playing music, since I found the times when they did play music very cool. :) Kitamura, we never got to see what was under his mask, and that’s a shame. Would be interesting if that happened. xD I like how gentle and kind he is with Sonico and knows how important her band is to her and even showed up at one of her performances, that was sweet. Also Super Pochaco, the modeling buddy of Sonico, appeared as a cameo as a background character here and there and it looks like she went from being black haired to a blondie. You can probably tell who her role model is so I’ll just keep my yap shut. Although this aside, would have been nice to hear Pochaco speak or at least have a full scene with her in it. I think it would have fit perfectly. The rest of the characters are pretty much minor so not much to say about them. So I guess that’s it for the characters. Overall 9/10Overall, I enjoyed this anime, so I gave it a 9/10. For me ? I even re-watched it a few times. But I don’t know if that’s just me being a fangirl or not. Lol Would I recommend it ? If you like music anime or a nice slice of life, I recommend this or of you are simply a Sonico fan like me, then GO WATCH IT, WHAT ARE YOU WAITING FOR !? Also Season 2, when ?

I guess what fascinated me about Super Sonico, was her...guitar. Seriously, me being a musician and guitar player myself. I like characters that play instruments especially guitars. I love seeing shows featuring characters, more specifically female character that play guitar or are in a rock band. That's why I looked forward to Soni Ani, a series that's looks good, but is pretty simple in it's execution. You may know Sonico was originally a mascot for a software company, and used to promote music festivals. It became popular so she became a multimedia franchise with games, figures, music, manga and now an anime. If you've seen art and figures of her, she's quite curvy and always wears headphones, and sometimes has her Red Gibson SG with her. One game I've heard of is like a dating sims game where you are her manager who gets her model gigs and helps with her music career, and could even fall in love with you...! The anime takes that idea and expands on it a little. In the series she's a college student but also juggles a career as a model, and make promo appearances. On top of that she's the leader of a 3 piece all female rock band  (Suzu on bass, Fuuri on drums) who get together to practice and do performances. She also has pet cats and often wakes up late. The description has the makings for a fun show, and it is, though like I said it's basic. A typical episode has Sonico juggling her 3 activities. There's coflicts with model clients on what she should wear, Sonico's guitar goes missing in another episode, and another where Sonic reflects on her past. We do learn a little about her background: why she's into music and is continuing the tradition of her rockin' grandmother. We see her manager sometime trying to push to wear skimpier model outfits, but at the same time protect her from people being inappropriate. Oh he always wears a hannya mask. I was waiting for this show to take off with maybe some K-On type of humor or a dramatic moment. But never really reached an exciting level of engagement. It's a fairly laid back type of series, and although it culminates in a major concert, there really isn't a payoff. Don't get me wrong, I love the character designs of the show and the look of everything. Though I'm a bit surprised there wasn't a lot more fanservice pertaining to Sonico. Perhaps they took a different route to not have her bouncing around all of the time in a bikini or have multiple panty or booty shots. But there really isn't that much to begin with. Maybe some more service here or there might have perked up a show or give way to some cliche fans service jokes. Maybe she could ask the model photographer or manager "excuse me, why are making me pose like this?" They also chose to make her intelligent, which is a nice change, rather than be ditsy (like her drummer). It's just something was needed to increase the show's energy. The songs are okay, the opening is catchy and the opening song in their concert in the final episode is somewhat memorable Though I can think of some other shows about similar subjects that have better songs, as well as better story writing for the series. But it's difficult to create a show around a character that's just a mascot, so it's bound to come to out a little flimsy. I would say this anime was part of the whole multimedia package for the character. And that doesn't necessarily mean its has to be outstanding, which it isn't. It helps if you're a Super Sonico fan. A missed oppurtunity I'd say, but it is watchable and fun to look at. 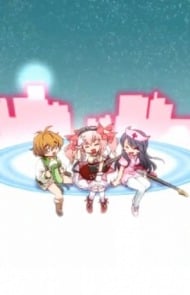 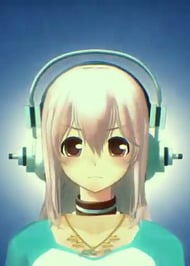 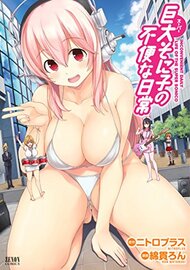