Song of Wind and Trees 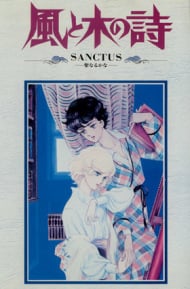 When nobleman and gypsy-born Serge Batouille arrived at Laconblade Academy, he had no idea his life would change forever. Upon arriving, he is roomed with the sexually-voracious and flirtatious Gilbert Cocteau, which ensures that life at the prestigious school will dole out more complications and confrontations than either boy has dealt with in the past. Together, these two young men brave love, growth, and the pain of youth, all while growing closer together than anyone would have thought...

StoryThe story of this hour-long OVA is fairly simple to say the least. It was made for fans of the manga, and thus, you'll be fairly confused unless you get a primer. Luckily the version I watched came with just that, so I was able to get some back story before plowing into "I don't understandville". The basic premise is that Serge joins a boys academy, and is unknowingly placed with the school slut of sorts, Gilbert. This young man uses his body for good test scores and such, since he dislikes school. His sadistic guardian funds the school, so Gilbert's behavior is overlooked, to say the least. Meanwhile, prim and proper Serge does not approve of his roommate's behavior, and thus the story begins. The story itself is very slow and quiet, but it fits the content well. The whole point is to see the growth between Gilbert and Serge, but given the length, we aren't shown a great deal. There are giant gaps in between certain events that happen with the two, leaving you to wonder what happened in the meantime. In addition, the ending (or lack of one, really) leaves much to be desired. I can easily say that this would appeal to fans of the manga, since I haven't read it, and was left with many unanswered questions. In general, as a light romance of sorts, this wasn't half bad, but might be boring to some (comparable to Maria-sama ga Miteru as far as pacing). I do need to make a big note that this is, in fact, yaoi. Granted, it isn't full boy-on-boy action all the time, but there are a few sexual scenes and some kissing (as well as nakedness). Would I classify this as blatant hentai? No, because the majority of the story isn't like this. But if you are squeamish about these things, don't watch this, period. Unlike such shows as Earthian which are branded yaoi and really are nothing of the sort (or are shounen-ai at best), this has definite yaoi parts, and a very sexual theme.AnimationThe animation, for this time period, isn't half bad. Backgrounds such as ivy-covered walls and streets were detailed and seemed made out of watercolors. The character designs will remind you of something in the vein of Brother, Dear Brother or something else from that time period. Very round heads, round eyes, limited facial features. Many of the male characters look very feminine, which is appropriate considering the show's base in homosexuality. The colors used weren't very inspirational and tended to look dull and washed out. Browns and yellows dominated the scenes, with the occasional purple or vibrant color which didn't seem to fit. All in all, decent visuals. SoundI'd say the audio to silence ratio was about 50/50, but it seemed to work. The musical selections were mixed with harpsichords, pianos, and other orchestral instruments. Given the time period this took place (1880s) and the mood and feel (a prestigious boys academy), the choice of instruments and tones fit very well. Silence accompanied tense or dull parts, which fit well also. The voice acting was decent for everyone, and seemed especially fitting for Gilbert and a few of the other boys. They tended to be especially feminine, which obviously fits with the storyline. CharactersGilbert and Serge are the two most important characters in the OVA, and consequently, are the only two we really learn about. As with the story, there is a great deal of information that we aren't privy to throughout the OVA, making this information a necessity to know about before watching. These two boys grow in various ways, mostly in a romantic way. Unfortunately, I felt like this wasn't shown very convincingly, perhaps due to the length. As I mentioned for the story, there are gaps between situations, making their growing closeness seem unrealistic in a way. I kept wondering WHY they had suddenly bonded more than they had, or why Serge was suddenly caring about Gilbert more than he had. It just seemed to come out of nowhere, but again, this surely was because this was made for fans of the manga who already knew the in between bits. Other characters were plentiful, but not really developed in any way, nor did you remember their names after you saw them once. Purely in the background, with nothing much to add to the main storyline. OverallIf you are looking for a slower romance and don't mind the boy-on-boy thing, this might be something for you to check out. You just need to remember that the story seems incomplete unless you've read the manga, and not all things will make sense to you. Besides this fact, it was a decent flick from the 80s, with a good selection of music. So who knows? Try it out if you think it sounds good to you.

Let's just cut to the chase; the answer is yes, this anime does depict romantic relationships between people of the same sex. I'd choose to describe the more sensual scenes as highly palatable and sometimes even intensely beautiful, but if you're unable to handle a story of such nature, then read no further. Basically, this anime uses a prestigious French school as its setting where our protagonist, the virtuous and talented Serge, meets his new room-mate and polar opposite in the manipulative Gilbert who uses his body to gain various favors from other men. Unlike some other anime of the same genre I know of, the story takes place in a world with enough regard for realism to avoid an ideal depiction of same-sex relationships and instead aims to depict some of the obvious cons; the most prominent one being the lack of consent the ones involved might face in their environments.  Make no mistake though, plenty of scenes are reserved for the sometimes unnerving worship of the male body and intense homoerotic events that I fear might ruin a lot of the appeal for viewers not looking for such things. Furthermore, the characterization stands fairly well for an OVA of merely an hour with reasonable amounts of development and a good foundation for occasional melodrama. Unfortunately, the anime is based on a manga of 17 volumes and lacks the time to include proper explanations for some bizarre plot points revealed later on which causes some confusion. This is not the major issue though as the narrative as a whole eventually ends up in a pit of glorified masochism only to wrap things up in a beautiful, intense and somehow redeeming scene with enough sense to rely on sensuality rather than sexuality. In the end this is a fairly decent watch, with fairly standardized technical merits. The soundtrack is the most impressive part of the OVA, but the animation remains somewhat mediocre despite certain moments of beauty and great character designs. It suffers from the same problems shared by a lot of shounen-ai (it would seem) such as glorifying certain themes like masochism which are made all the more disturbing by the youth of the characters but is undoubtedly very palatable in its depiction. Despite the mediocre score, I was somewhat impressed by this title and will consider giving more titles within the same genre a chance; romanticized adolescent melodrama has its perks as long as it doesn’t drag I guess.

Gilbert was actually a bad person and stuff, but i myself think he deserved a happy ending, he just really wanted to be loved, feel loved, that's why he did all that. August, he sexually and mentally abused Gilbert, but Gilbert still thought he loved him. Serge loved Gilbert, but he couldn't stand what Gilbert was doing, he tried to help him, change him. i think that the story was still missing something, but it was good. Animation was smooth i liked it. Sound was a bit poor, but it's old so i dealt with it. The melody was really nice, i liked that too. Characters were fine i guess. The whole movie was okay for a drama, but i myself would want the story to be longer. If anyone wanna watch it, you can watch it on youtube, it's full movie and has english sub.  Time : 59:27  https://www.youtube.com/watch?v=ruV2xh4epQU 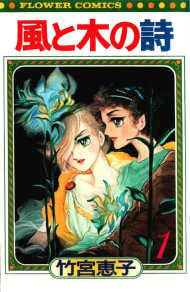 Kaze to Ki no Uta