Somali and the Forest Spirit - Videos 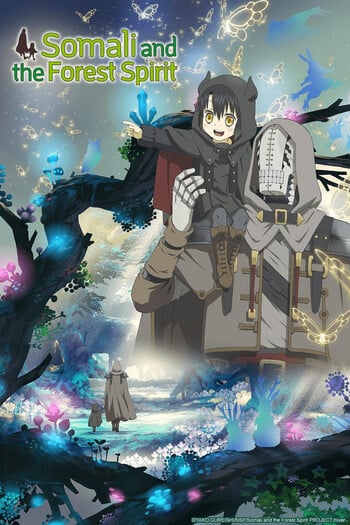 Hoping to cure Haitora's illness, Uzoi attacks Somali, but realizes she can't bring herself to hurt her. That night, Haitora reveals an important secret to Golem... which Uzoi happens to overhear.

Edible Herbs and the Oni's Dwelling

The Sea at the Bottom of the Cave

The Wishing Flower and the Promise Request

Dying Flowers Look Up at the Birds

The Footsteps That Stalk the Witches

Meetings and Bonds Prayed For

The Infant Child and the Green Fortress

Those Who Protect and Those Who Threaten

Anime-Planet users recommend these anime for fans of Somali and the Forest Spirit. All available to watch right here, right now!

Both anime explore the different relationships between a human character and a fantastical one. In addiions, the both have unique character designs for their non-human characters, beautiful environments, and some darker themes beneath their fantastical exteriors. I'd recommend them both on their own merits, but I reckon if you have enjoyed one, you'll probably enjoy the other.

Somali and Myne are cute, young protagonists that came from tragic backgrounds and try to live their lives to the fullest despite their setbacks and pending tragedy. Somali is one of the few humans remaining in a world overun by humaniod monsters that have hunted and persecuted humans to the brink of extinction. Myne is a dedicated bookwork that was transported to a world without books after she was killed in her real world. She vows to achieve her dream of living in a world full of books while battling an incurable condition that is literally devouring her. If you like cute, young protagonists giving their all, you'll enjoy both of these titles.

Both of them have a little girl as protagonist and they begin their story in a unique way, that's why the more you watch the more you get attracted to them as they have different dreams ( Somali to say forever with her dad VS Main to read books etc) but both get easy hurted or get sick and need someone to stay by their side every time.