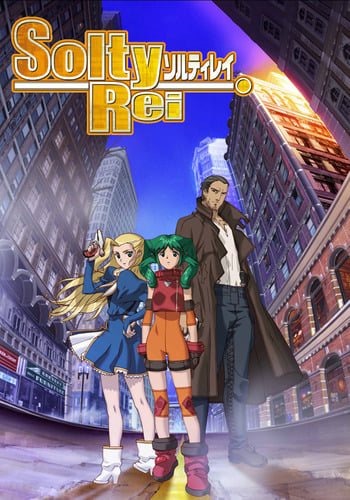 Twelve years ago, an incident known as "Blast Fall" unleashed major destruction and chaos. Now, years have passed, and mankind has learned to adapt by incorporating cybernetic limbs into its citizens. Roy Revent is a bounty hunter known for his violent acts towards criminals due to the loss of his daughter in Blast Fall; and when a criminal tries to take revenge on Roy, an unknown girl falls from the sky and saves him. She has no memory of who she is, or where she came from. With the help of Miranda, his boss and landlord, he takes in the girl and gives her a name of Solty. What is the real identity of Solty, and what caused Blast Fall?

StorySolty Rei is an easy to watch anime that combines some very typical Japanese gender roles and relationships and transports them to a futuristic world which is struggling to rebuild itself after a phenomenon called the “Blast Fall” leaves the society in ruins. Scores of people are missing, maimed, or killed and the city which served as the epicenter of the phenomenon is leveled. From these ashes emerges a human society full of haves and have-nots. With many of the have-nots being unregistered citizens who are not entitled to any governmental benefits or protection. Into this slowly healing society a nameless female character is introduced. Then through a seemingly chance encounter she latches onto a still mourning bounty hunter named Roy Revant who through a series of events haphazardly gives her the name Solty. From this point the series primarily revolves around the development of Solty’s character and her learning what it means to be human. With the secondary plot points being the revelation of Roy’s back-story, Roy’s missing daughter, and the events that lead to the “Blast Fall” phenomenon. All of this comes with the prerequisite twists, turns, and foreshadow and makes for a pretty solid story. That said, all of these great story elements really didn’t make the story standout as being original and as a result I merely gave the story a better than average mark as it was still well done. AnimationLike most Gonzo productions Solty Rei illustrated an extremely high production value and at times gorgeous animation that artfully blends CGI within the work. In addition, there are quite a number of backgrounds that are visually stunning and in all cases backgrounds are done at a very high level of detail making them very realistic. On a whole, not a lot to complain about here as Solty Rei is another very skillfully animated work by Gonzo.SoundThe technical production of the sound was artifact free and done very well. However, what earns Solty Rei high marks here is the way music and melodies are artfully woven into the plot. This is something that one rarely sees and to be honest something I totally ignored until it became totally obvious why they did things the way they did. Beyond that I found both the opening and closing themes to be very optimistic, upbeat, and hopeful all of which are common themes of the story. As a result, I gave the sound aspect of Solty Rei a very high grade as well.CharactersGenerally, I felt the characters were very well developed with ample time given to explain their back story and inherent motivations. However, I did have one major complaint which I did ding Solty Rei for which relates to how Gonzo went about explaining who Solty was. As I felt there wasn’t nearly enough foreshadow to at least hint at some of the dramatic elements that were revealed in the last few episodes. That said, beyond this possibly nit-picked (note it is entirely possible that I’m extremely obtuse and totally missed some things) remark I felt that Solty’s character evolution was done well and that the back story and premise around all the supporting characters was revealed in both an artful and appropriate manner. One other thing that should be mentioned is that the key to the character development in Solty Rei is that Solty is the primary motivator behind the development. While this is hardly unique in anime, what I found was done very well was the fact that all of the character development is done without becoming annoying or too heavy handed which is quite difficult when one considers that this has to be done using a child, Solty, as the key motivator. As a result, I definitely have to give a bit of extra credit for the deftness that was shown in this regard.OverallSolty Rei is an interesting anime that does a good job telling its story. The series is, for the most part, well written and well laid out and the characters are very easy to like and identify with. Moreover, the judge of any series is really did you enjoy watching it and I have to say that I definitely enjoyed this series and while I may have been overly critical on certain elements none of this meant to imply that I think it’s not worth watching. Instead it is probably more a comment on me watching a ton of anime recently and as a result, being much pickier about giving out 8’s and 9’s. Regardless though I would totally recommend Solty Rei to any casual anime fan as it is a solid work.

Solty Rei is basically GONZO trying to make some bucks out of those who like robot girls. And as expected they fail miserably because they are incompetent. This show came out in an era other anime like Ghost in the Shell or Chobits were already classics and instead of trying to play around with the formula, it basically did nothing with it.So let me get things straight. The setting is a futuristic city where many people have cybernetic implants and the protagonist is a bounty hunter looking for his daughter. He is battling all sorts of robotic criminals while trying to reunite with his family, which is a noble cause and a nice premise. So in one of his missions he finds this unconscious trump girl and out of the goodness of his heart he takes her to his home instead to public service of something. It was already far fetched in Chobits or Elfen Lied but an adult cop doing the same is beyond all belief. So he finds out she’s a super powerful robot and soon makes her his cop aid instead of selling her to some laboratory for analyzing her.As always, GONZO goes completely juvenile in the project and before you know it the whole series ends up being just short irrelevant missions full of pretty chicks, badly done CGI, convenient events, forgettable soundtrack, and lukewarm battles. The story becomes absent for most of the show before it goes for a last moment revelation and conclusion in the end, which by then has no interest because the whole show was retarded storytelling with no clear direction. For the same reason the characters never manage to become appealing to you, since the very story is not letting them being anything more than a tired archetype and any attempt to develop them feels totally stupid. Solty is nothing but a cliché robochick with a voice you just want to strangle her for, while Rose’s turnaround makes no sense at all. There is nothing wrong with having guilty pleasure series where the story and the characters are unimportant, like in this case. In case they make one they need to be very extreme and fan servishy; a thing SR is not. It plays out as a poorly presented sci-fi anime on one hand and as a lukewarm fan service show on the other, so in effect it leaves you with no real fondness of it.Since I was paying attention to the scores of such shows for many years, I clearly remember how it had an 8+ score the first 2 years after it aired. That had fooled a lot of newbs to consider it a good anime. In reality it was just stupid hype from Last Exile fans who were seeing GONZO and voting 10 without thinking further. Something similar to what happens with SHAFT today. In reality a simple breakdown of all it elements easily proves how weak it is compared to other anime that have a similar trope.- Mahoromatic was a lot funnier and sexier for a robot chick (Solty’s moving hair reminded me of Mahoro)- Cowboy Bebop had far more interesting bounty hunters- Ghost in the Shell was far more mature when in came to human-machine fusion- Queen’s Blade was a heavy fan service showIn effect you get nothing out of this show other than yet another reassurance of how incompetent GONZO was, is, and forever will be. Not recommended. 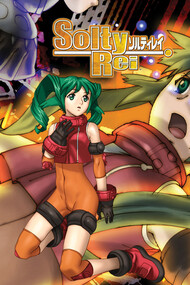 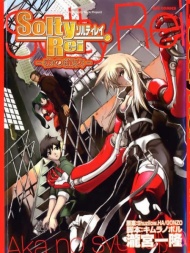