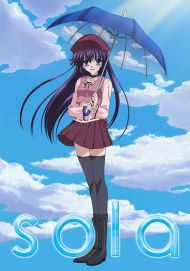 StoryCreativity and innovation are keystones in writing quality stories.  Taking these principles to heart, Sola weaves a fascinating and involving storyline from a fairly basic concept, transforming an ordinary series into a commendable piece of anime craftsmanship.  Despite the presence of a number of harem elements, such as three cute girls chasing after the lead male, Sola is anything but.  Though the first episode hinted at a somewhat shallow cast of characters, I was elated to find out that this was not the case. I've come to respect series that discard character fluff in favor of substance and depth.  At its core, Sola focuses on the emotion of regret, using each of the three girls to reflect upon a different facet of the idea.  Only two of them have an actual romantic connection to Yorito, which takes away the annoying "sister is madly in love with brother" cliché.  Mana, for instance, while initially appearing to be a typical girl with a high school crush, develops tragically as the series progresses.  Unlike many romances where the girl remains wishy-washy the entire duration of the series, she is forced to confront the sincerity of her feelings.  As Yorito delves farther into the world of the Yaka, she must decide whether or not he is worth pursuing, even at the cost of her own happiness. In and of itself, though, the actual storyline itself was somewhat of a bore.  My enjoyment from Sola came almost purely from watching the characters interact with each other and struggle with their circumstances.  Very little is actually explained about the Yaka, save their longevity and aversion to ultraviolet light, which left me with a plethora of questions that were never answered.  The actual concept of the Yaka seemed little more than a ploy to bond Yorito, Matsuri, and Aono together, but I felt its shallowness somewhat easily dismissed because the series never actually uses it as a focal point; it was touched upon so little that I never actually built much serious concern or interest.AnimationJust from watching the opening video, you'll notice an incredibly fluid and detailed atmosphere that pervades throughout all thirteen episodes, surprisingly with relatively few lapses. Details such as the rotation of the wrist when a character throws an object really stand out.  These visual subtleties might not seem like much, but when viewed in a cumulative sense, they work wonders when framed during action scenes.  The emotional vibes of the characters come alive in their actions, and you really get the sense that when a character is experiencing fear, he/she is sincere.  Lots of neat light filtering effects stand out too, which prove as strong visual compliments to the Yaka's inability to withstand direct sunlight. My only real complaint is Aono's character design, as her hair/eye coloration just doesn't seem to fit in with the rest of the cast.  Most characters have dark hair and eyes, but hers are much lighter, and thus stand out a little too much.  Not too big an issue, but it is a minor quirk.  Aside from that, however, nearly flawless; you'd be hard pressed to find such beautiful aesthetic interplay in any non-movie/OVA production to date.SoundWhile you're at it, toss in a splendid opening and ending theme for good measure. Tack on a beautiful soundtrack and there's not much to complain about here. I found myself hopping back into previous episodes occasionally to listen to some of the insert music, and that's always a good thing. I particularly liked Matsuri's seiyuu, as she gave her character a very distinct feel and flavor.  Overall, high marks here in general, as there's little to really find fault with.CharactersYorito, though initially seeming shallow, turned out to be rather well developed.  Despite following a fairly generic male design, he quickly emerged as a respectable lead.  Clear and decisive, he spends little time wallowing in self-pity, relying more on his skills in rational thought than in wrist cutting.  With each episode, my amount of respect for his character grew, and I felt the decisions he reached by the end were presented quite well.  At times he could be annoyingly naïve, but as the series progressed he actually learned from his mistakes, which really humanized his ordeal. Matsuri (especially), Aono, and Mana, being the crux of the series as far as relationships go, were all panned out nicely as well.  Each of the girls has her own reason for being drawn to Yorito, and none of them are really cookie-cutter.  None of them were attracted to him "just because," which I felt to be one of the series' real strengths.  As real life goes, as well, Yorito doesn't try to bounce between the three as if they're mindless puppets.  He has true affections of his own, and the hopes and desires of the girls are not reciprocated in full. Takeshi's side story was my only real gripe.  It built itself up to be something greater, but after the climax it ended with a thud and I found myself scratching my head.  Not bad per se, but uninspired.OverallAll in all, I enjoyed Sola from start to finish.  Though it moves tediously slow at times, it never lasts long and is always followed by an interesting plot twist or action scene (all of which are gorgeously animated.)  After I first finished the series, I had somewhat of a slight distaste for the ending, but reflecting back I'm actually quite satisfied.  The series spanned its thirteen episodes quite well, conveying a high level of production quality while not trying to overstep its bounds.  Sola won't find its way into your collection of classics, but it's certainly unique enough to leave a lasting mark, and of that I have no lasting complaints; a satisfying watch that I'm sure many would enjoy.

Why is the sky always so depressing?(this is in reference to the fact the I watched this series right afterwatching Air which also has this theme) Wow... this series was amazing. More people have to catch on to Sola. This should be a top 50-75 anime on the web-site and frankly I'd have to say it's among the most complete series I've seen. From beginning to end this series is nothing short of brilliant. They've done almost everything right with this series. The pacing is sublime. It goes like this: there are several episodes which tie in, there's a minor resolution (so you can catch your breath), then repeat. And the story builds through each minor plot angle. Also, Sola does a terrific job of not spoiling key pieces of information too quickly. Obviously the viewer has a better sense of what's going on than the characters for most of the series, but a lot of the back-story as well as the purpose of the two major supplemental characters (Takeshi and Mayuko) don't come to a full level of understanding until much later. In other words, the series doesn't just spoon-feed you information, you have to make some assumptions as you go along and maybe they'll be right or maybe they'll be wrong; that's what makes the story so much more compelling. Sola is simply at a higher level than most anime. The story is probably best categorized as a quasi-tragedy. It's not the sort of depressing, eerie tragedy that was had in School Days (see my review), but it still has some great impact. The final few episodes are fantastic. A totally inconceivable plot twist in episode 10 leads to the beautiful tragedy. The characters are fairly strong. You immediately get a strong connection to Matsuri (the female lead) and soon after Yorito (the male lead). Aono (Yorito's sister) provides a polarizing anti-hero to round out the three main characters. There are flashes as well from the other characters, particularly Mana (Yorito's classmate) and Takeshi (I'm thinking of one quote in particular). There is very strong allusion throughout the series to Plato's work "The Allegory of the Cave." If you've read this grand work of Plato, then you'll surely get a lot more out of the series. If you haven't, no worries, as a little bit of inference will get you a long way. There are also some definite Shakespearian references in the last 4 episodes, but I wouldn't say with confidence that this was really a theme. There is one very significant symbol in Sola and that is the sky (or sora). The next to last scene (I think) will really test how much you've bought into the whole symbolism of the sky. And I think the reason I like anime like Sola (and Chobits) so much is that they are more than a sum of their parts. Overall, this series is magnificent. I've given a minor deduction for the characters could've been a bit more dynamic and as well, the sky symbolism isn't perfectly executed. However, these don't act a deterement to the real crux of this series which is the story. So 9.5 out of 10, a must watch in my eyes.

IT was a little slow paced and the twists at the end hurt my heart but it was good none the less. my only complaint is the sad ending 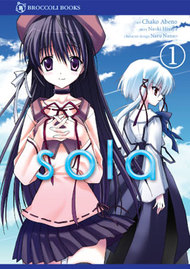