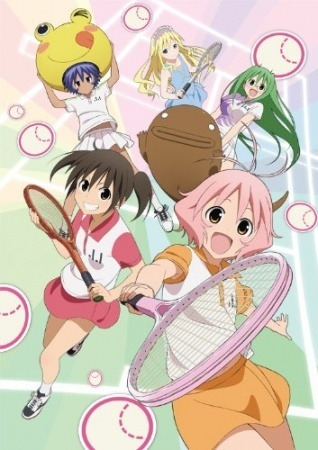 Special generally means fanservice, and it does mean fanservice if the regular series is some titty show or chockful of fanservice and bitches. This mainly falls into the category of the latter, for the lack of tits. It has tits but not enough. The special deals with hot springs because nothing says special than getting naked or slapping on some bikinis for some sexy time in water. They already dedicated an episode to bath houses and onsens back in the third episode for no reason at all and they're doing it here again, for no reason at all because fanservice.

The reason is they have a tournament or some shit in the next week and whether this is over the course of a few days or in a single day doesn't matter in the slightest because, again, fanservice. And apparently some... backstory shit, like talking and telling stories. Sometimes. Other times it's stacking titties on titties, fondling, reusing scenes, changing the water because Pinky bled into it and is that blue-haired girl here? No. Why? Because the creator is fucking stupid.

Is it worth your time even if she isn't here? Depends on how much you want to see more small tits and the only set of large mammaries on the team. Probably not, as it lacks the secondaries and is as a whole, stupid as fuck. The tales range from amusing to stupid. Just skip it, you can watch an episode of something better.

If Misaki were here, I'd double the score.