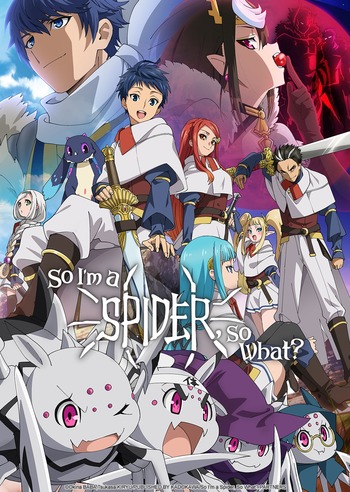 The 5 like my review is neutral. Neither good nor bad!

While the OG manga is focused purely on the spider lady, the Anime is a mix of the little spider and her friends from school (i guess 50/50 so far, 7 episodes).

It's ok if you did read the manga and wan't to know more about the whole situation, but for new ppl it's quit a mess, the story about the lady is rushed and you'll skip a lot of her development. I just hope the manga won't turn towards the Anime, bcs I'm not interested in her school comrades (all hero like, born mostly in royal or very rich families + comfy lives = a lot of talking, moral dillemas and issues among the others). For example, I don't like this approach. Idle talk is not my thing.

Animation is edible but a bit childish and simple (like World of Warcraft in 2021), although the Voice Acting is ok, espiecially lady spider :)

This show starts out as an interesting concept, kinda bogs down, but then turns into something I genuinely enjoy. Unfortunately, that's not the last I can say about it. As the show has gone on, the animation has been getting extremely lazy. Episode 21 is hot garbage. This was clearly never meant to be a serious show with a high animation budget, but it turned into one and all the serious moments have every single corner cut while the "lol I'm an overpowered spider" moments weirdly have 10x more effort put into them. It's just jarring to the point where I'm not sure if I even want to finish even though there's only 3 episodes left.

Let me start by saying I have been sticking close to this and refreshing the page every Friday just to watch this.

I like the story. It's cute, it's weird, it's funny. A spider wrecks a dragon. And it isn't done that easily. The main character does have some struggle with it.

I wasn't sure about the animation combining with the 3D type style, but it meshes well because it isn't overdone.

Sound is great. The noise isn't directly crawling in my ears, but it's accurate.

As for characters, I do not care about anyone outside of the dungeon. Yeah, they're good characters but absolutely nothing draws me to them. I don't care enough to even remember their names. I'm not sure if it's just myself or the characters, but anyone out of the dungeon is meh. Admistrator D and Kumoko are the ones keeping me here.

It's worth a try even if you aren't into the isekai genre.

I’ve caught up until ep 19 and I can say that this anime is mediocre and tough to watch.

There are bit of spoilers in the review. You have been warned.

It has a pretty interesting story and it is what kept me watching the anime. It has two perspectives which are  the protagonist and blue haired hero guy. The protagonist’s side was the boring part since all she does is kill, eat, and lvl up. It get’s repetitive fast and becomes drag to watch. The hero’s part is boring at the  start but gets interesting quick since there is a large conflict that he needs to solve. I’m also interested in the demon king’s motives and what her reason for causing war even though she’s a classmate of the hero. Although the story is intriguing, it’s not enough to keep me wanting to watch more.

It’s suprising that the CG looks better than the hand drawn animation. The models looks bad but in terms of motion, the CG is actually better out of the two. The are drawn well but nothing spectacular.

The music the best out of everything in this anime. The OP’s, ED’s, and bgm are all pretty good.

The characters are not really that interesting. The protag can be funny and cute sometimes but most of the time she’s unbearable. Her dialogue is tiring to listen is what I meant by unbearable. The other characters are also pretty bland.

Why is this anime not named "I'm a shitty generic isekai, so what?!" I really not often say that I hate a anime, but this one is just...urg..Maybe it's cause I read the manga and like "the MC" and not this shitty little generic whiny trash of a human MC. This anime is just a disappointment for me. I want to see our lovely little spider and not this dump human shit. Feels like someone just needed to force this into a great story..and make it shit! When I see that a whole episode is just about the human arc then I just want to go and throw up! Will just finish it out of because and then try to forget it exist!