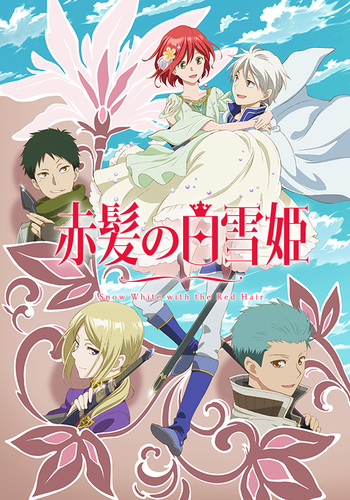 I have 4 words IT WAS FRIGGIN AMAZING. I honestly love it so much it's my all time favourite anime i legit watched this like 7 times XD. I 100% recommend this anime it is so awesome <3

It's the best anime ever... The best anime in word... I love this Anime i love all the unique characters of this anime... But sad now because i want more episodes from this anime... At least life time episodes.. i request the creator to continue the anime please... I don't know but how can I alive without snow white with the red hair ...... Really please give us more seasons

By far one of the best IMO

Somehow even more amazing than the first season, if that is even possible. Very well done and absolutely adorable. I would highly reccommed it.

This is the second season of Akagami no Shirayukihime (or Snow White with the Red Hair). It is a continuation of the first season and it further advances the romance between Prince Zen and Shirayuki. We also get to know the characters better and find out about thier pasts.

Shirayuki recieves an invite from Prince Raji of Tanbarun to come and stay at the castle. Prince Izana, Zen's older brother, forces her to go with hopes of getting rid of Shirayuki from Zen's life. He wants to do so becuase she is of a different social status and knows that she is in love with Zen. He fears she will ruin Zen's reputation as a prince.

Obi, one of the prince's aids (who is very skilled in combat) accompanies her to Tanbarun. The others stay behind in Clarines where they try and find a young "pretty boy" who has intentions of kidnapping Shirayuki. No one knows what his intentions are, so they are taking great caution with the situation. Long story short, the pretty boy finds out that Shirayuki has left Clarines and follows her to Tanbarun. He ends up kidnapping her but his plans are foiled when Shirayuki and the pretty boy are then kidnapped (yes, again) by an infamous group of pirates known as The Claw of the Sea (pretty boy used to be a part of thier crew but he abandoned them so they want revenge).

That night Zen recieves word that Shirayuki has been kidnapped. Obi had met his match while trying to protect Shirayuki in the incident and was knocked out cold. Zen and his aids, Kiki and Mitsuhide, race to Tanbarun and with the help of prince Raji and a group of people (many of whom are ex-nobels) called the Lions of the Mountains.

They end up rescuing Shirayuki and taking down the Claw of the Sea in the process. Through this incident many of the characters develop well (personality, way they do things, etc.) and we are introduced to Shirayuki's father (she had been raised by her grandparents. I'm going to be nice and not tell you who he is). We also get to know more about Obi's mysterious past.

Brief nudity when the main characters are forced to stay at a hotel overnight since it is raining and they use the public baths. Nothing is shown.

A couple of sex jokes that will fly over the heads of most children.

One of the main antagonists in this season is a pirate and is scantily clothed. Midriff and cleavage are visible, but it is not excessive. She wears short skirt as well. She is abusive and harsh towards her crew.

There is quite a bit of fighting throughout the show but it never goes beyond what you would find in a Disney movie.

I didn't know it could get better but it did. Can I just mention the Zen and Shirayuki reunion scene *.* absolutely a scene every romance fanatic needs. I love that even though there is an insinuation of other people being interested in Shirayuki those suckers know who her true love is. Zen <3

Overall a lot of character growth in this series with our lovable strong Shirayuki and dependable determined Zen. Even Raj becomes an enjoyable character with his cute siblings.

I had plenty of giggles and squeals and just a happy heart. The conflict in this series was also really good! I was kind of annoyed by the random conflicts in season one (but not to annoyed because Shirayuki can handle that shiz nit) but this one was consistent and executed really well. But hey you don't need me to tell you whats up, seriously just watch this series. It a must watch for anyone who loves a good romance.