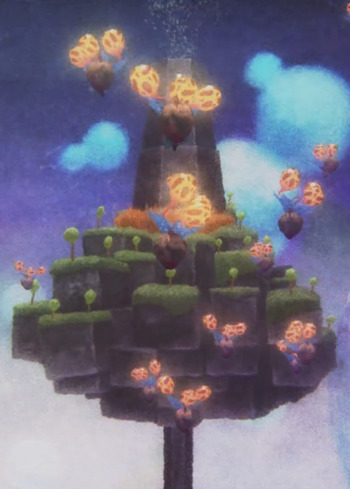 The day before the graduation ceremony, five middle school girls, each preoccupied with their real everyday lives, meet each other in a fantasy world after being sent there through a sudden occurrence. There, they learn about the impending crisis that this world is facing. The way to avert this crisis is for the five to collaborate and bring their five hearts together as one through dance. However, the five cannot come to love the world, and cannot tell their true feelings to one another, so their hearts are unable to unite. The time limit is fast approaching. Can the dance of the five girls save the world? And will they be able to graduate?

Wild Knight: Knight of The Seal

Izumi is no ordinary high school girl- she's also an excorcist in possession of a “wolf stone”. Sometimes, the wolf stone shows her a vision of a horned young man, a vision that always stirs her heart with emotional pain. One day, she is attacked by a supernatural creature and the mysterious young man makes an appearance to save her. When he murmurs, “I've finally found you, Princess of the Heavens,” the destiny sealed within Izumi begins to stir and a legend of the heavens is revealed to have crossed time and space to once again come alive. Will these starcrossed lovers heal an ancient rift within the heavens and find their happily ever after?