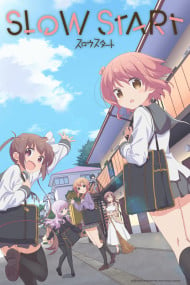 Hana Ichinose has enrolled in high school one year late due to studying to get in. It might not seem like a big deal, but it is to her. She’s off to a slow start, but she wants to work hard and catch up to everyone else!

Slow Start is a fantastic anime.  Without getting into too many details and spoiling everything.  -Fun and light hearted.  -Some of the best chibi animations.  -Fantastically drawn!  Slow start is a great comedy highschool slice of life with some yuri elements.  Each character is very likeable and humorous in their own way. It's more about the comedy than romance, kind of like Yuru Yuri. With the overall show being mildy sexual but comically flirtatious.

This was a nice little show overall and it reminded me a lot of another show called Hinako Note in being supercute but also quite lewd (in addition to the protagonists looking almost identical). Both also make extensive use of "chibi" moments (moements?) to jack up the kawaii factor even further. If you don't mind (or indeed prefer) CGDCT anime with generous amounts of fan service, then I'd say this is one of the best shows to pick up. Special mention goes to the animation also, which is unusually fluid here courtesy of CloverWorks. They did an awesome job in that regard. 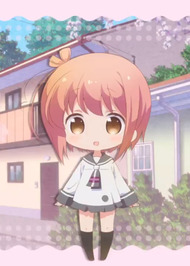